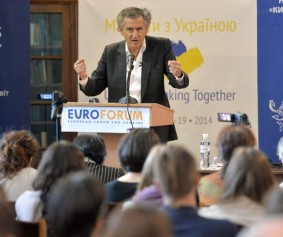 An international “intellectual marathon” of political thinkers of divergent persuasions took place in Kyiv, on May 15-19, 2014, to discuss Ukraine’s future.

“Ukraine: Thinking Together” was the brainchild of the New Republic’s literary editor Leon Wieseltier and Yale historian of Central and East Europe Timothy Snyder. The conference was sponsored by the American, German, French and Polish embassies, numerous intergovernmental and non-governmental organizations and the Ukrainian ministries of foreign affairs and culture.

This extraordinary event included Russian, Western European and American participants who joined local and regional intellectuals to talk about the political future of Ukraine. Yet, most of the Western media has pretty much ignored it.

The media’s inattention could perhaps be attributed to the fact that discussions did not fit in well with the simplistic understandings of Ukraine and Russia that are held in the West, or the current explanations of what’s going on in Eastern Ukraine. Then also, there was a great deal of criticism of Western misunderstandings of the ties between Europe and Russia, including the special ties between Germany and Russia, and Putin in particular.

The conference showed that Western political labels of “ left,” “right,” “nationalist,” and “fascist” are nearly meaningless in Ukraine.  Also, the event revealed that whatever was wrong with political life in Ukraine, on both the pro- and anti-Russian sides, was also wrong—and in some instances worse—in Russia and the West.  How, for example, did we make nothing of the fact that the only European observers Putin allowed to safely monitor the Crimean referendum on joining Russia were some of the worst right-wingers?  Or that Ukraine’s best known anti-Semite was allowed to raise the Russian flag in separatist Donetsk?

If the struggle for Ukraine between East and West becomes a watershed event of the early 21st century, we should better be able to understand what is going on there to figure out how to respond to it.

After the conference, one of the participants published a critique of the Western left’s knee-jerk reaction of blaming the United States first, thus holding to Putin’s line about the “fascist” Ukrainians that were encouraged by the Americans.  The article was published in the Kyiv Post.

The article below, is followed by links to Timothy Snyder’s opening remarks, as well as the enlightening program of the event and several related items.

At Thinking Together Conference, Rethinking the Left*, By William Schreiber**

In the summer of 1863, a group of liberal intellectuals – fed up with Europe’s flaccid and ineffectual resistance to Russian imperialism  – organized a conference in Paris to support the country whose democratic uprising had been the latest victim of Russia’s reactionary czar: Poland.

“The shameless approval, mock sympathy, or idiotic indifference with which the upper classes of Europe have witnessed … heroic Poland being assassinated by Russia” was proof enough for Frederic Engels, one attendee, that the ruling class of Europe could no longer be trusted with foreign policy. “But with the working classes it is different. They mean intervention, not non-intervention; they mean war with Russia while Russia meddles with Poland.”

Karl Marx, another delegate at the Paris conference, later wrote that the organizers had adopted a motto: “A free Europe based upon a free and independent Poland,” and displayed a banner reading: “Resistance to Russian encroachments upon Europe – Restoration of Poland.” The Paris conference in support of Poland was, according to Marx biographer Rolf Hosfeld, the origin of the Communist International.

“Ukraine: Thinking Together,” a five-day conference in Kyiv that ended on May 19, brought together celebrated intellectuals from around the world and from across the political spectrum. It was sponsored by the embassies of France, Germany, Poland, the United States, the Ukrainian ministries of foreign affairs and culture – and a long list of intergovernmental and non-governmental organizations.

But it was the initiative of two scholars of liberalism, Leon Wieseltier of The New Republic and Timothy Snyder of Yale University, that set the program in motion.

In some ways, the conference was a restoration of a left tradition that has strayed far from its origin in the democratic national liberation movements that sought to free Europe from a reactionary Russian Empire a century and a half ago. It further illustrated the ways in which Ukraine’s politics confound simple notions of left and right.

Throughout the “intellectual marathon,” as Konstantin Sigov, a professor at Kyiv Mohyla Academy, rightly described it, many speakers criticized the left in particular for its response to the events in Ukraine, citing its irresponsible willingness to accept the Kremlin narrative of events without question.

In opening remarks that set the stage for the week’s deliberations, Snyder spoke of a growing movement of European political parties – from Germany’s Die Linke on the left to Greece’s Golden on the right – united against the EuroMaidan Revolution by a Moscow determined to undermine the European Union’s democratic vision in favor of an alternative Eurasian ideology.

Snyder described the Kremlin as drawing from a “grab bag” of history, shamelessly creating contradictory explanations to justify its actions: The Ukrainians are intolerant fascists, the Kremlin tells the EU; the Ukrainians are decadent supporters of gay rights, it tells Russians.

As if to illustrate his point, within a day of his remarks, a Soviet-style denunciation of the conference made the rounds, published by an organization calling itself the Fourth International. Exemplifying grab-bag historiography, the author ignored the origins of the International, not to mention the hawkish stance Marx himself took against the Russian empire, to attack the conference as a gathering of “right-wing” intellectuals gathered “in the service of imperialism.”

Unfortunately, one need not read the leftist fringe press to encounter the logic underlying this criticism. Several speakers took to task established liberal media outlets, such as the Guardian, for their charge that the U.S. has dragged Europe and Ukraine toward war with Russia.

“There has been an impression that if America was for it, we had to be against it,” said Slawomir Sierakowski, a New York Times columnist and head of Political Critique, an international movement of left-wing intellectuals based in Poland. “This disregards the concrete realities of the place this is happening – Ukraine.”

The often complex realities of the EuroMaidan Revolution, especially its political diversity, underscored the fluidity of political alliance within Ukraine. The conference mirrored an uneasy process of realignment and reappraisal across the spectrum of right-left intellectual movements in Ukraine – with support of the Maidan movement emerging as the new fulcrum.

“The international left defined itself in opposition to empire and everybody knows the greatest imperialist, well, that’s America. It was convenient to ally with Moscow against America and now it is hard for them to get past that and critically examine Russia,” said Vasyl Cherepanyn, director of the Visual Culture Research Center. “Even here in Ukraine, the left – and here I’m speaking about the non-Communist left – was divided 50-50 over the Maidan. There were those who refused to participate at all because of the right-wing’s involvement.”

But, just two years ago, in 2012, the center ran afoul of the socially conservative administration of Kyiv Mohyla Academy  –  one of the conference hosts – after its staging of “Ukrainian Bodies,” an art exhibit  controversial for what some considered obscene content. In the ensuing debate, university President Serhiy Kvit, known for his affiliation with pro-Ukrainian groups, expelled the center from the academy.

During the EuroMaidan Revolution, the center became active on the Maidan, first suggesting guards in field hospitals to prevent the abduction of injured protestors by police. Proposals of this kind placed the Center on the same side of the protests as its former adversary: Serhiy Kvit, who post-Maidan now also serves as Ukraine’s minister for education. It would be an overstatement to suggest the conference marked reconciliation; members say they aren’t optimistic about the prospects for an official reinstatement.

In Ukraine and Moldova, the same divisions in society that made it difficult for authoritarian leaders to consolidate their power now pose distinct challenges to cooperation in pursuit of liberal reform, explained Tatiana Zhurzhenko, a political scientist from the University of Vienna. The ability to cooperate, if not agree, is the essence of the democratic process.

Although “Thinking Together” was organized to provoke conversation between Ukraine and the international community, the most important dialogue may have been between the Ukrainian participants themselves. It is still unclear whether the experience of the Maidan alone can provide the common ground on which to build a new, more inclusive Ukrainian intellectual community. But it could be crucial for Ukraine’s future.

As tensions between Kyiv and Ukraine’s traditional communist left come to a head over charges of sedition, the opportunity and need for a new liberal left in Ukraine is clear. In a country of dueling oligarchs and rampant inequality that in the words of Snyder, resembles a parody of Marx’s expectations for late-stage capitalism, the most basic elements of liberalism – equality and accountability – hold an appeal that endured the failed Soviet experiment.

The questions Ukraine seeks to answer after the Maidan have international implications. If Ukraine is capable of uniting the so-called left and right in pursuit of common goals like the abolition of corruption, its example will have influence far beyond its borders.

To Carl G[ersh]man, president of the National Endowment for Democracy, this is why Russian President Vladimir Putin so fiercely opposed Ukraine’s revolution: “If Ukraine is capable of becoming a successful democratic state, it will ultimately have an effect on Russia.” Or, as Adam Michnik, the brash veteran of Poland’s Solidarity movement put it, with ironical relish: “A specter is haunting offices in the Kremlin. The specter of EuroMaidan hangs over Red Square.”

* William Schreiber is a Coca-Cola World Fellow at Yale University.

Organizers and Partners of “Ukraine: Thinking Together”

Ukraine: Thinking Together Kyiv, 15-19 May Manifesto and Program Schedule

Leon Wieseltier: The Russian War on Ukraine Is One of the Proving Grounds of Principle in Our Time. Remarks from Kiev

“Ukraine: Thinking Together” – an international conference in Kyiv

Timothy Snyder: Ukrainian Extremists Will Only Triumph if Russia Invades