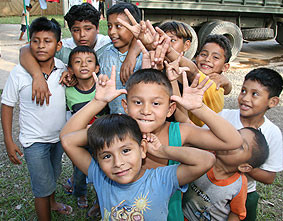 Much has changed, obviously, since 1989 when I published “Mexico: chaos on our doorstep.**

As so often has happened, my timing was bad. The book’s research identified a problem prematurely and the title raised hackles among some Latin American specialists, most of whom had a more optimistic view.

But what led me to write the book may still be relevant. It was my “discovery” of the startling fact that the 1500-mile U.S.-Mexican border was the only land frontier between what in those days was called The Third World, preindustrial, poverty-stricken, and unstable societies, and the First World of a few “developed” European and North American countries, Australasia and Japan. Ultimately, I argued, that was bound to lead to a security crisis for Washington.

The prediction has been a long time in coming and we may still not be there yet — but recent events on the border suggest we are very near at least.

I couldn’t but be struck these past few days with the familiarity of “the children crisis” on the Texas border. In my reporting for the book in Mexico and in the U.S., particularly among Mexican Americans, the head of Los Angeles’ medical services told me his budget was coming apart because pregnant illegal Mexican women increasingly were using his facilities. They accomplished two purposes: they got free medical services not then available in Mexico except to the rich. But, more important, they established the American birthright of their offspring who might in later years claim citizenship for their families. But his complaint was that in order to meet this additional drain on his facilities he was having to reduce his postnatal care extension service.

Substitute the nationalities of the current children and accompanying parents and pregnant women now producing “a humanitarian crisis” and you see trends haven’t changed.

The question not too often asked is how these children, many if not most unaccompanied by adults and some without contacts in the U.S., made their way two thousand miles up through Mexico from Central America. A bitterly humorous but excellent semi-documentary Anglo-American film, “El Norte”, in 1984 described the perils of such a journey. Only acquaintance with Mexico gives one an appreciation, for example, of the instructions to the Central American protagonists of the film as how they are to pass as Mexicans in their trip to The North (the U.S.). It is obvious not only that it takes “guides” but collaboration of Mexican authorities, at least at the local and regional levels, for the rapidly growing flow of children. Caiaphas, for example, the Mexican state on the Guatemalan border, is one of the most troubled in the country. Their inspiration to come north depends, as well, on the widespread belief in Central America and beyond that amnesty for illegal entrants is coming in the Obama Administration’s proposed immigration “reform”.

A look back at some of the problems outlined in my book suggests it is less dated than one would otherwise assume; one could argue only the numbers have changed. The border was already under siege I learned then when I talked off the record to members of the Border Patrol and U.S. immigration agents working the border turnstiles. Once when I quoted some Washington numbers, one American policing a frontier gateway asked me, incredulous, if I believed the official statistics. In my investigations then I was already shown ultraviolet photographs of crowds of illegals crossing the border under cover of night even in the highly populated areas surrounding San Diego. And I heard details of the expanding gangs of ”coyotes”, the criminal body traffickers, who arranged for less sophisticated or adventurous migrants to cross into the U.S.

Furthermore, any examination of U.S. border cities, where I visited, whether Nuevo Laredo, El Paso, Nogales, or San Diego, exposed the growing call on their resources by the growing satellite cities on the Mexico side and the difficulties of policing any American border precautions. (The El Paso fire department, for example, was routinely called on to aid with fires in Ciudad Juarez, just across the border. Juarez has more recently been the site of such violence in “the drug wars” tens of thousands of its estimated two million people have fled to safety.)  It was obvious that the growth of the so-called maquiladoras — twin plants that meshed manufacturing on both sides of the border to employ cheaper Mexican labor and tariff incentives — would be a draw not only for rural Mexican and Central American labor but would tempt even more illegals to cross into the U.S.

My book “bombed;” for, as The New York Times iconic reporter and editor, Scottie Reston, once said, “Americans will do anything for Latin America — except read about it”. When we made a documentary, “The Invisible Invasion”, based on the book — I wrote and narrated it with cameos on border sites — we managed to interest only one public TV station in telecasting it, once. Unfortunately, even my copy of the video has disappeared — at least temporarily.

The overall issue I posed then — and perhaps it is still as significant — was whether Mexico’s European elite (as distinguished from “the Golden race”, the Mestizo bulk of the population and the growing number of  Indians) would assume the responsibilities of their then authoritarian control. It was clear that Mexico was not only built on what was then labeled the 14 families, but that “civic spirit” was a concept alien to the culture. It’s perhaps still valid to ask that question today.

Of course, Mexico 2014 is a vastly different than the country I examined a quarter of a century ago. Its economy, after the great foreign exchange crisis of 1994, has expanded exponentially until it is now the 14th largest in the world, the 10th largest in purchasing power. The then 70-year monopoly of power of the Party of the Institutionalized Revolution (the PRI) has been broken by the once Catholic-centered National Action Party (PAN). Not only have peaceful transfers of power between the two parties taken place, but slowly if painfully the old government monopolies with their cozy relationships with crony capitalists (including the multi-billionaire Carlos Slim, perhaps the world’s richest man, and a major New York Times stockholder) are dissolving in a slow progression toward a market structure.

That export-led economy — its more than $200 billion in exports larger than the combined exports of several major Latin American countries — has more free trade agreements (40 countries) than any other country. Its most notable trading partner, of course, is the U.S. (though the North American Free Trade Pact including Canada). Some 80 percent of exports of machinery and agriculture flows north, with the Norteamericanos supplying half its $370 billion in imports. Finally, the curse of the 1938 left-wing ideological nationalization of its vast oil resources is slowly being amended so that at least its vast reserves have access to new international technologies through production sharing and other arrangements.

Mexico’s population explosion — it has the largest Spanish-speaking population in the world of 120 million and after Brazil the second largest cohort in Latin America — has slowed to just under 1 percent annually. But the tenfold increase since 1900 means that even today more than half the population is under 25. That is a great contributing factor to income inequality — more than a third of its population, particularly in rural areas, lives in abysmal poverty — may even have accelerated in recent years. The $22 billion remitted by immigrants to the U.S. constitutes a critical part of life for millions of Mexicans left behind — and explains why the border migrant problem is central to the political as well as the economic issues between the two countries.

What dominates contemporary Mexico life, however, is the violence and economic effects surrounding the enormous drug trade, largely catering, of course, to the $60-billion market for illicit drugs in the U.S. According to the Global Peace Index 2014, it cost the Mexican government almost $172.7 billion to fight the powerful drug cartels in 2013 (more than twice Mexico’s foreign debt).

Former President Felipe Calderon launched an aggressive campaign to subdue the traffickers who threatened to the take over the whole apparatus of government through massive corruption of the police and others in government officialdom. But since Calderon launched military operations in 2006, violence has escalated not only between the government and the drug rings but between competing criminal gangs. Two years into his six-year presidential term as Calderon’s successor, President Enrique Peña Nieto — the return of the PRI to power — has put the emphasis on reducing violence rather than his predecessor’s frontal attack on the traffickers.

So far there is little evidence that strategy has worked and the violence continues apace. Murder rates have risen substantially, according to the UN Office on Drugs and Crime, nearly triple the level in 2007. Calderon’s resort to using the military arose from the inefficiency and corruption among the police. But recent violence between the competing cartels has reached levels, particularly in the states bordering the U.S., that whole villages have been forced to flee. The lifeblood of the drug traffic, of course, is a high level of corruption. In the 2013 Corruption Perceptions Index, Mexico ranks 106th [out of 177] and is the worst performer among the large Latin American countries, excluding Venezuela.

Peña Nieto’s response to criticism — especially American — of his policies has been that no Mexican strategy would be successful if the United States does not stop the flow of weapons to Mexico, block money laundering through North American banks, and, above all, reduce its own drug consumption. In 2008, the U.S. and Mexico — acknowledging the necessity for a mutual approach to the drug epidemic and the growing power of the trafficking cartels — adopted the Mérida Initiative. It sought to combat transnational crime with $1.4 billion in a three-year U.S. grant to the Mexican government for military and law enforcement training and equipment. U.S. Senate investigators since have seen the program as largely ineffective, if not a failure.

The arrival of The Children’s Crusade following the Pied Piper of illegal job opportunities in the U.S. marks a new era in the growing dysfunction of the U.S. southern border. And what looked like a probable security crisis in the future to me 25 years ago now appears to be, indeed, on our very doorstep.

* A version of this column will be published Monday, June 23, 2014, at yeoldecrabb.com.