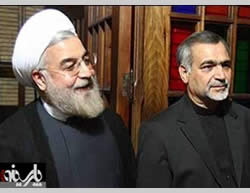 Hossein Fereydoun is President Rowhani’s younger brother and, unlike his older brother, did not change his last name from Fereydoun to Rowhani. In his memoirs, Hassan Rowhani related that his brother worked alongside him in the struggle against the monarchic regime before the Islamic revolution. When Ayatollah Ruhollah Khomeini, the founder of the Islamic revolution, returned to Iran from exile in Paris in February 1979, Fereydoun was a member of Khomeini’s security team and was responsible for maintaining order and managing the ceremonies as the leader of the revolution made his way from the airport in Tehran to Behesht Zahra Cemetery south of Tehran. In the early days after the revolution he was responsible for the detention of political prisoners and members of the Shah’s Organization of Intelligence and National Security, the SAVAK, who were incarcerated immediately after the revolution.

After the revolution, Fereydoun was appointed Governor of Nishapur County in Khorasan Razavi Province in northeastern Iran. Subsequently he was appointed governor of Karaj County in Alborz Province near Tehran Province. According to various reports, Fereydoun fought in the Iran-Iraq War, but it is not clear in what capacity.

At the end of the Iran-Iraq War, Fereydoun joined the Foreign Service and spent eight years as Iran’s ambassador to Malaysia. On completion of his term in Malaysia, he spent several years as a member of the Iranian delegation to the UN. Upon his return to Iran, he was appointed as an adviser to his brother, who served as chairman of the Expediency Council’s Center for Strategic Research.

Like his brother, Fereydoun is also considered close to former president and chairman of the Expediency Council, Ali Akbar Hashemi Rafsanjani, and his family. In his memoirs, Rafsanjani mentions Fereydoun on two different occasions. In his memoirs from May 15, 1982, Rafsanjani writes about his visit to Karaj, where he stayed with Fereydoun, who served as governor at the time. Rafsanjani was accompanied by Hassan Rowhani, who served as chairman of the Defense Committee of the Majles; Abdolkarim Mousavi Ardebili, a senior cleric and one of the founders of the Islamic Republic Party and Supreme Court president after the revolution; and Ali-Akbar Nateq Nouri, Minister of the Interior at the time. In his memoirs from March 31, 1984, Rafsanjani notes that some matter arose in connection with Hossein Fereydoun in Karaj, but he did not specify what this matter was.

After Rowhani was elected president, exiled Iranian journalist, blogger and cartoonist Nikahang Kowsar published a posting on his personal blog claiming that according to “a security source” who held a position in Iran’s defense establishment in the 1980s, Hossein Fereydoun abused his position at the time, sexually harassing women who worked with him. This report was allegedly confirmed by another person who worked with Fereydoun.

Kowsar further claimed that Fereydoun passed sensitive information to Rafsanjani’s son, Mehdi Hashemi, during the period that Hashemi spent outside Iran (2009-2012). Kowsar raised the possibility that Fereydoun, who was formerly associated with the Ministry of Intelligence, participated in gathering incriminating information about the capital accumulated by the family of Supreme Leader Ali Khamenei. The information that was gathered was sent by Mehdi Hashemi to several people outside Iran. This information waspublished in late 2009 by movie director Mohsen Makhmalbaf. The information provided by Kowsar has not been verified by any other source.