Make No Mistake, It is Jihad 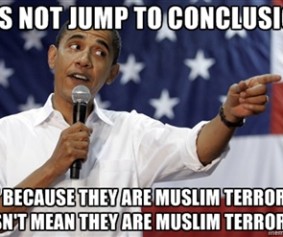 Questions such as, “If they don’t like it here why did they stay?” and “why do they want to kill us?” are asked by many Americans. The answer is simple and the Tsarnaev brothers made no secret of it.

Their motive is Jihad.  They have revealed their motive on Facebook and Twitter. The YouTube videos they’ve reposted make their motive – empathy with Jihad- very clear. Yet, the media seems to accept their family’s claim they haven’t noticed anything suspicious; no change in behavior, or – against evidence – change in dressing code…. Their friends also considered them and their behavior ordinary.

Incredibly, with clear evidence of their actions, intentions and affiliation, there are no statements or visible actions to curtail the incitement for Jihad on the Internet, or to name the culprit – Islamism.

Had this been a motorcycle gang, or a cult, we would have learned its name by now, and investigative reporters would have been getting journalism awards for exposing a murderous gang.  But these days, those who dare to expose Islamists are being cast out for alleged political bias and hate mongering.

The inquiry of the Boston “incident” – as referred to by the President – is in danger of obfuscation and manipulation and it’s important for the expert community and the public to pay close attention to the “investigation” as it develops.

Judge Michael Mukasey, former Attorney General and a cherished member of the ACD Board of Directors, has said it best:

Make No Mistake, It Was Jihad,

by Michael B. Mukasey

Let’s hope the administration gets over its reluctance to recognize attacks on the U.S. for what they are.

If your concern about the threat posed by the Tsarnaev brothers is limited to assuring that they will never be in a position to repeat their grisly acts, rest easy.

The elder, Tamerlan-apparently named for the 14th-century Muslim conqueror famous for building pyramids of his victims’ skulls to commemorate his triumphs over infidels-is dead. The younger, Dzhokhar, will stand trial when his wounds heal, in a proceeding where the most likely uncertainty will be the penalty. No doubt there will be some legal swordplay over his interrogation by the FBI’s High-Value Interrogation Group without receiving Miranda warnings. But the only downside for the government in that duel is that his statements may not be used against him at trial. This is not much of a risk when you consider the other available evidence, including photo images of him at the scene of the bombings and his own reported confession to the victim whose car he helped hijack during last week’s terror in Boston.

But if your concern is over the larger threat that inheres in who the Tsarnaev brothers were and are, what they did, and what they represent, then worry-a lot.

For starters, you can worry about how the High-Value Interrogation Group, or HIG, will do its work. That unit was finally put in place by the FBI after so-called underwear bomber Umar Farouk Abdulmutallab tried to blow up the airplane in which he was traveling as it flew over Detroit on Christmas Day in 2009 and was advised of his Miranda rights. The CIA interrogation program that might have handled the interview had by then been dismantled by President Obama.

At the behest of such Muslim Brotherhood-affiliated groups as the Council on American Islamic Relations and the Islamic Society of North America, and other self-proclaimed spokesmen for American Muslims, the FBI has bowdlerized its training materials to exclude references to militant Islamism. Does this delicacy infect the FBI’s interrogation group as well?

Will we see another performance like the Army’s after-action report following Maj. Nidal Hasan‘s rampage at Fort Hood in November 2009, preceded by his shout “allahu akhbar”-a report that spoke nothing of militant Islam but referred to the incident as “workplace violence”? If tone is set at the top, recall that the Army chief of staff at the time said the most tragic result of Fort Hood would be if it interfered with the Army’s diversity program.

Presumably the investigation into the Boston terror attack will include inquiry into not only the immediate circumstances of the crimes but also who funded Tamerlan Tsarnaev’s months-long sojourn abroad in 2012 and his comfortable life style. Did he have a support network? What training did he, and perhaps his younger brother, receive in the use of weapons? Where did the elder of the two learn to make the suicide vest he reportedly wore? The investigation should include as well a deep dive into Tamerlan’s radicalization, the Islamist references in the brothers’ social media communications, and the jihadist websites they visited.

Will the investigation probe as well the FBI’s own questioning of Tamerlan two years ago at the behest of an unspecified foreign government, presumably Russia, over his involvement with jihadist websites and other activities? Tamerlan Tsarnaev is the fifth person since 9/11 who has participated in terror attacks after questioning by the FBI. He was preceded by Nidal Hasan; drone casualty Anwar al Awlaki; Abdulhakim Mujahid Muhammad (born Carlos Leon Bledsoe), who murdered an Army recruit in Little Rock in June 2009; and David Coleman Headley, who provided intelligence to the perpetrators of the Mumbai massacre in 2008. That doesn’t count Abdulmutallab, who was the subject of warnings to the CIA that he was a potential terrorist.

If the intelligence yielded by the FBI’s investigation is of value, will that value be compromised when this trial is held, as it almost certainly will be, in a civilian court? Dzhokhar Tsarnaev’s lawyers, as they have every right to do, will seek to discover that intelligence and use it to fashion a case in mitigation if nothing else, to show that his late brother was the dominant conspirator who had access to resources and people.

There is also cause for concern in that this was obviously a suicide operation-not in the direct way of a bomber who kills all his victims and himself at the same time by blowing himself up, but in the way of someone who conducts a spree, holding the stage for as long as possible, before he is cut down in a blaze of what he believes is glory. Here, think Mumbai.

Until now, it has been widely accepted in law-enforcement circles that such an attack in the U.S. was less likely because of the difficulty that organizers would have in marshaling the spiritual support to keep the would-be suicide focused on the task. That analysis went out the window when the Tsarnaevs followed up the bombing of the marathon by murdering a police officer in his car-an act certain to precipitate the violent confrontation that followed.

It has been apparent that with al Qaeda unable to mount elaborate attacks like the one it carried out on 9/11, other Islamists have stepped in with smaller and less intricate crimes, but crimes that are nonetheless meant to send a terrorist message. These include Faisal Shahzad, who failed to detonate a device in Times Square in 2010, and would-be subway bomber Najibullah Zazi and his confederates.

Is this, as former CIA Director Michael Hayden put it, the new normal?

There is also cause for concern in the president’s reluctance, soon after the Boston bombing, even to use the “t” word-terrorism-and in his vague musing on Friday about some unspecified agenda of the perpetrators, when by then there was no mystery: the agenda was jihad.

For five years we have heard, principally from those who wield executive power, of a claimed need to make fundamental changes in this country, to change the world’s-particularly the Muslim world’s-perception of us, to press “reset” buttons. We have heard not a word from those sources suggesting any need to understand and confront a totalitarian ideology that has existed since at least the founding of the Muslim Brotherhood in the 1920s.

The ideology has regarded the United States as its principal adversary since the late 1940s, when a Brotherhood principal, Sayid Qutb, visited this country and was aghast at what he saw as its decadence. The first World Trade Center bombing, in 1993, al Qaeda attacks on American embassies in Kenya and Tanzania in 1998, on the USS Cole in 2000, the 9/11 attacks, and those in the dozen years since-all were fueled by Islamist hatred for the U.S. and its values.

There are Muslim organizations in this country, such as the American Islamic Forum for Democracy, headed by Dr. Zuhdi Jasser, that speak out bravely against that totalitarian ideology. They receive no shout-out at presidential speeches; no outreach is extended to them.

One of the Tsarnaev brothers is dead; the other might as well be. But if that is the limit of our concern, there will be others.

Mr. Mukasey served as attorney general of the United States from 2007 to 2009 and as a U.S. district judge for the Southern District of New York from 1988 to 2006. He is also a member of the Board of Directors of ACD/EWI.