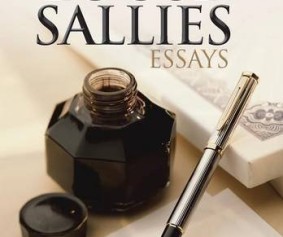 The title of this superb new collection of 44 essays, “Loose Sallies,” led me to believe that Daniel J. Kornstein—a highly regarded attorney who has written several books and articles on the law and its relationship to literature—had decided to try his hand at fiction. But an opening note advises that the word “essay” is defined by Dr. Johnson’s Dictionary (1755) as “A loose sally of the mind; an irregular undigested piece; not a regular and orderly composition.”

Yet, while titled “Loose Sallies,” this book offers exquisitely focused, elegantly written, coherent discussions of some of the most important aspects of American exceptionalism and the practical role that seminal U.S. Supreme Court decisions play on the vitality of the American democratic
experiment.

This rich work focuses on the development and drafting of the Constitution, civil liberties, interesting personalities and a potpourri of miscellaneous essays. This is indeed a love story—a highly personal story of the author’s unabashed affection and admiration for the law and the fundamental values of American exceptionalism: freedom of expression, religious liberty and the right to privacy.

While he covers a broad range of legal topics, social issues and fascinating people, Kornstein, a partner with Kornstein Veisz Wexler & Pollard, demonstrates that good legal writing doesn’t have to be boring, dense or hard-to-follow.

The book’s initial essays focus on the tensions between federalism and states’ rights, the fear of big state domination in a federal system and the roles played by the original odd couple, Hamilton and Madison, as well as other players in the extraordinary drama that led to a written Constitution and Bill of Rights.

Kornstein makes these compelling personalities and complex issues come alive and shows how relevant many of the issues grappled with more than 225 years ago still are today. He writes about the failed uprising led by Henry Shays in late 1786 ( “Shays’ Rebellion) and notes that “in some ways [it was] an earlier version of the Occupy Wall Street Movement.” Kornstein comments insightfully: “Americans are not joined together as a people by birth or religion, blood or by soil. We are bound together by ideas and values that move us beyond our backgrounds, lift us above our interests and teach us what it means to be a citizen.”

Weaving historical context, from Hamilton’s Federalist No. 84, as well as John Milton’s discussion of freedom of the press in “Aeropagitica” and John Stewart Mill’s “On Liberty,” Kornstein argues that the fundamental right to free speech finds support in other constitutional provisions and doctrines and from the very structure of the Constitution. “Freedom of speech is the fountainhead of nearly every other form of freedom,” he writes.

Kornstein discusses one of his idols, Oliver Wendell Holmes, and recalls the excitement, as a young law student in the 1960s, when he first read Holmes’s dissents in Gitlow and Abrams. “Reading Holmes gives you the sense of fog lifting. Reading him, you feel windows opening, clouds passing, sunlight and a fresh breeze entering the room,” Kornstein writes.

In his reviews of others’ works, Kornstein is unafraid to highlight flaws in reasoning or pose alternative views. Reviewing Thomas Healy’s “The Great Dissent,” which he describes as “an amazing, terrific, brilliant, extraordinary book,” Kornstein nevertheless suggests that Healy may
have overlooked a reason for the development of Holmes’s expansive view of freedom of speech.

The author marvels at the fact that Holmes is reported to have had around 10,000 books in his library and wonders, “Might not Holmes’s own outsize passion for reading explain, at least in part, his more liberal attitude and tolerant tilt toward freedom of expression? It is hard to imagine an avid reader with a skeptical turn of mind like Holmes being in favor of anyone, in or out of government, telling him what he can or cannot read.”

In his review of James F. Simon’s tour-de-force, “The Antagonists: Hugo Black, Felix Frankfurter and Civil Liberties in Modern America,” Kornstein considers two disturbing 1940s cases that are forever stains on American justice, Golitis (constitutional to require school children to salute the
flag over their religious objections), and Korematsu, (upholding the wartime relocation of Japanese Americans). Kornstein notes, “Fear is no friend of civil liberties.”

Kornstein is gracious, even when he disagrees. After surgically eviscerating Hitchens’ brutal and nasty criticism of Holmes, Kornstein expresses appreciation for Hitchens’ work, because “Hitchens makes us think, and that enlarges our own mental universe and makes us feel more alive.”

Though unabashedly liberal, Kornstein offers a touching remembrance of conservative icon William F. Buckley, Jr. Recalling Buckley’s role as an expert witness in a free expression case Kornstein defended in the 1980s, he refers to Buckley as “a stand-up guy who declined any fee to testify on behalf of a friend and freedom of expression.”

In a show of respect and admiration for Arthur Liman, an exceptional litigator who also made important public service contributions, Kornstein expresses deep concern that because of the gossip-loving environment we live in today, good people may be more reluctant to accept high-profile positions in government.

He uses his affectionate essay on Simon Rifkind, who continued to practice at Paul, Weiss, Rifkind, Wharton & Garrison and counsel clients and colleagues until his mid-90s, to bemoan America’s youth culture and “the American tradition of ignoring the wisdom of age.”

Kornstein explores the relationship of law and literature and the apparent dichotomy between speech and action in both literature and law. He explores the issues raised—conflicts, entrapment, mitigation, agency—when Adam and Eve consult a lawyer (my favorite essay), and also shares thoughts on the tension between judicial activism and judicial restraint, the role of courts in a democracy, the myth of objectivity in law, what he views as the false objectivity of original intent.

Most controversially, Kornstein calls for a reinstitution of the draft and the abolition of private schools and inherited wealth. He acknowledges it is unrealistic to expect these proposals to be adopted and laments, “Next to inherited wealth, private schools are the most anti-democratic anti-egalitarian and anti-meritocratic feature in our society.”

Kornstein was drafted at the end of his first year at Yale Law School and served in the Army during Vietnam. While friends and classmates thought he was “nuts,” Kornstein tells us that for the “unlimited opportunity” America had afforded him (a free education at Bronx High School of Science and City College) he thought of the draft “as part of a social contract I implicitly made with America. It seemed to me to be hypocritical to talk in class in an ivy league institution about democracy and liberal ideas and equality before the law and then let military service in an unpopular war fall primarily on the shoulders of underprivileged young men.”

Kornstein shows compassion and understanding for those who came to different conclusions about service. But of his own time in the military he says, “I learned at least as much from my Army experience as I did from law school about equality under the law,” and laments that, “The volunteer Army has, unfortunately, culturally separated the vast majority of Americans from any first-hand contact with anything military.”

Elegantly written, Kornstein’s essays inspire us. This is legal writing at its very best: it is legal writing as literature that presents us with a portrait of the author, a man of letters with noble values and an abiding love of America and its promise.

* Michael Miller is a solo practitioner in New York.

**This review was published in the New York Law Journal on June 19, 2014.  Loose Sallies- Essays, was published by Author House LLC