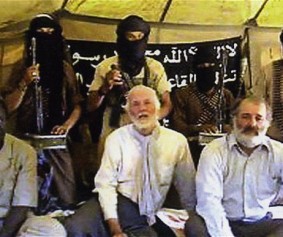 Terror finance trials over the last ten years have frequently involved transfers by individuals of a few thousand dollars to terrorist organizations abroad. Sometimes those cases get as much attention from the news media and law enforcement as multi-million dollar cases of funding terrorism.

This tendency is unfortunate because it causes us to lose sight of the big time patrons of terrorism and their methods. Small transfers are likelier to involve individual actors, small groups, and criminal activity. High-dollar terrorist transactions are likelier to involve state sponsorship, or at least large organizations such as major charities, and sometimes corporations which are targeted for extortion or kidnapping-for-ransom schemes by militants.

• France paid $15 to $20 million to the Taliban for the 2011 release of reporters Stéphane Taponier and Hervé Ghesquière. France may have also paid a $34 million ransom to Al Qaeda in North Africa for the release of four captives last year, and an $18 million ransom just last week to release four journalists abducted by Syrian rebels.

• The Holy Land Foundation, largest Islamic “charity” in the U.S. in the early 2000s, gave $12.4 million  to Hamas. George W. Bush said that the money HLF raised was “used by Hamas to recruit suicide bombers and support their families.” The leaders of HLF were found guilty of providing material support to terrorism and received sentences ranging from 15 to 65 years in federal prison.

• Qatar has spent an estimated $3 billion (or, less credibly, $5 billion) to fund Al Qaeda-linked rebels in Syria. In so doing they’ve helped turn Syria into a charnel house with over 150,000 dead since 2011.

• Carlos the Jackal received, according to different accounts, either $20 million or $50 million from the Saudi government in 1975 to release the OPEC ministers he had taken hostage.

Allegedly, this money wasn’t used by Carlos himself but was pumped back toward international terrorist causes. Eventually, Carlos the Jackal was caught and sentenced to life in prison in France on separate charges.

• The Born brother heirs to the multinational Bunge and Born corporation were forced to pay a $60 million ransom to leftwing Montoneros terrorists in Argentina in 1974. Some of the money may have been kept in shadowy Argentine and Cuban banks. Mario Firmenich, mastermind of the plot, was convicted in 1987.

• The Palestinian Authority just pledged another $74 million to spend as incentives and stipends for terrorist “martyrs” and their families from their annual budget.

Several lessons should be learned from the above sampling of terrorist jackpots:

1. Don’t pay ransoms. Paying ransoms is the quickest way to fund millions of dollars worth of future terrorist attacks and to increase the likelihood of larger ransom demands down the road.

2. In cases of suspected terrorist financing, always look at both the source and the beneficiary of the funding—not just one party in isolation. With the Holy Land Foundation, we tend to focus mostly on HLF as a contributor, without examining how Hamas uses Islamic charities in the West to finance its operations. Likewise in the Taponier and Ghesquière case, what little coverage there was in English language media focused on the ransom negotiations and French foreign policy, while completely ignoring the aftermath of what the Taliban and the Baryal Qari group did with the money. We learn more from each case when we look at both sides of the equation.

3. Recognize the magnitude of the money involved in these cases. Recall that Al Qaeda’s budget before 9/11 was about $30 million and carrying out the 9/11 attack cost about a half-million in direct expenses. A ransom payment of “just” $15 million is an enormous sum to terrorist groups who can use it for training, recruitment, arms, websites, bribes, fake identity documents, travel, explosives, and wages for dozens if not hundreds of operatives for a year.

4. Identify state sponsors. It is gratifying that several of these big-timers like the Holy Land Foundation and Carlos the Jackal were brought to justice. But notice that when a national government is the sponsor of the activity, no criminal prosecution takes place. The nations involved aren’t even fined like banks would be for committing similar violations. Rather, these cases are handled rather through diplomatic back channels. France has never been held accountable for violating international agreements against the payment of ransoms to terrorists. Qatar has yet to be designated a state sponsor of terrorism despite ample evidence that it is. Sometimes it seems like those with the deepest pockets and links to the terrorist underworld—groups like Islamic Relief, men like Dawood Ibrahim, banks like Al-Rajhi, and spy agencies like the ISI—have escaped the same level of scrutiny that smaller fish receive.

5. Keep probing. The news media is naturally focused on “news.” Their inclination is to stop reporting on stories like these after the financing has been revealed, stopped, or somebody has been convicted. But there is still a great deal of reporting that could be done on each of these major plots. For example, after the Bush administration took on the Holy Land Foundation, their plan was to continue prosecution of related entities and front charities, but the Obama administration put those investigations to a halt (which allowed Islamic Relief USA to continue operating). And there is still a great deal of confusion and conflicting accounts about exactly why Carlos the Jackal accepted the OPEC ransom payment rather than killing Saudi official Sheikh Zaki Yamani, which Carlos was supposedly under orders from Wadi Haddad to do.

6. Don’t underestimate Islamist motives. The temptation in the West is to ascribe the same motives to terrorists that tempt us in our own culture and in secular societies: money and power. But in several of these high-dollar cases, the donors received no tangible benefits from their gifts, and the recipients used the money to further a larger cause—neither for private financial gain nor for raw political power. Keep in mind that demands for ransom to release infidels are permitted under the Qur’an (47:4). Islamic law also mandates that a portion of zakat be given to holy warriors (Q9:60). The transfer of funds to Hamas offered little private gain for the leaders of the Holy Land Foundation, but the leaders did it anyway in keeping with the principles of zakat. An assumption that these transactions are “purely business” is a culturally biased assumption.

* A.D. Kendall has been blogging about terrorist financing since 2009 at moneyjihad.wordpress.com and is a contributing expert at ACD’s Terror Finance Blog (terrorfinance.org)