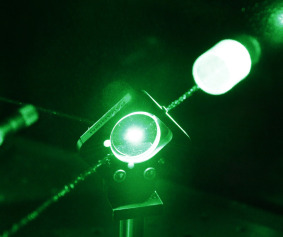 Uninterrupted radio frequencies are necessary to guarantee wireless communications. The rapid growth of wireless communication and computing systems with a wide range of applications and services have crowded the airwaves, increasing their vulnerabilities to interference. “I can give you a whole list of interference incidents. Radars, wireless land devices, unlicensed interference problems. We get them every day,” Frederick D. Moorefield Jr., director of spectrum policy and programs at the office of the Defense Department chief information officer, is quoted saying.

The threat of jamming radio frequencies in the civilian sector has increased due to a large number of jamming devices, which are sold in the U.S. despite the 1934 Communications Act that strictly forbids the manufacturing, marketing and importation of such devices into the U.S. While the FCC seems incapable of stopping the jammers trade, optical free space communications technologies using lasers to transmit data through readily available open space, are fast developing.

Networks are said to be one of the U.S. military’s Achilles’ heels. Cutting off communications through jamming or the destruction of infrastructure could be devastating to battlefield commanders. Peer and near-peer competitors such as China, Russia and Iran are reportedly boosting their electronic warfare capabilities.

Laser communications, also known as free space opticals, hold the promise of giving the military a means to transmit high amounts of data and voice that is hard to detect and an alternative to traditional radio frequencies.

Proponents say it is ready for prime time and mature enough for it to proliferate in the military realm more widely. Interest in the technology is also growing in the private sector, which may bring down costs for end users.

Research firm MarketsandMarkets in a July report said the free space optical business is expected to grow at a compound annual growth rate of 45 percent through 2020.

John P. Leuer, executive director of next generation communications at Boeing’s space and intelligence systems division, said at the recent Milcom conference that “the commercial sector is leading the world and the nation in this technology. It used to be the other way around. It used to be the DoD.”

Boeing is just one of several defense contractors developing the technology for military and civil applications.

Anthony Nigara, senior director for advanced systems at Exelis, which is working on a laser communications project for the Office of Naval Research, said in an interview that adversaries may want to block, degrade or eavesdrop on U.S. military communications. And there is another pressing problem that the technology can help solve: crowded airwaves.

Radio spectrum is increasingly congested. Domestically, the military is being forced to share blocks of spectrum with commercial wireless providers. Coordinating spectrum usage overseas can be even more complicated. Some of the interference isn’t coming from adversaries, but friendly forces. Electronic fratricide, the degradation of one’s own communications systems through overuse or mismanagement of spectrum, is a growing problem.

“Even if you could operate those links in a contested environment, you really need a fatter pipe,” Nigara said.

Laser communication uses pulses of light to transmit the 1s and Os. Data rates can be 100 to 1,000 times faster than traditional radio frequency systems.

The concept for free space optical communications has been around since the 1970s. One of the pioneering companies, LightPointe, based in San Diego, has offered the technology commercially since 1998. Grants from the Ballistic Missile Defense Organization helped it develop its technology, president and CEO Heinz Willebrand told National Defense. Most of its commercial customers use it as bridges between buildings or on campuses to avoid the high cost of burying fiber or paying telecom carrier fees.

“We’ve seen sales to the military increase over the years, but they don’t exactly want their use of the technology to be widely reported,” Willebrand said.

Another advantage is speed for ultra low latency applications, he said. Since the data is moving at the speed of light, nothing is faster — even radio waves or fiber optic cable, which is also a kind of laser communications. “It is faster than all radio frequency bridges and faster than fiber, which often has to be routed around buildings or natural obstacles such as lakes, rivers, mountains, etcetera,” he said. A laser communication transmission can travel six miles before the same one leaves a typical radio, he added.

The covert nature of the technology is also attractive because even if enemies can’t jam or intercept communications, they can still glean intelligence knowing when a transmission is made and from where, Willebrand said.

“Even if a radio signal is encrypted adequately, the enemy can still detect that there is a transmission and where it is coming from, which of course is not desirable in many situations,” he added.

While there are commercial providers, the military, as usual, has its unique requirements. Systems must be rugged enough to survive the wear and tear of the battlefield. If the system is mounted on a ground vehicle or aircraft, vibration must also be taken into account.

Nigara said the TALON program has worked on synchronizing transmitters and terminals on the move, whether from ship to ship, or ship to shore. They must be able to find each other and link automatically.

The technology also has to work well in bad weather. Fog, rain or dust can degrade the quality of the signal, but they don’t completely cut it off, Nigara said.

“You’re starting with a high enough data rate that you can deal with some perturbations due to weather and stuff like that,” he said.

A knock on laser communications is that it is point to point. Radio waves can bend around objects. The transmitter and terminal must be able to see each other. But just as traditional radios sometimes require relays to make it over mountains or beyond the curvature of the Earth, free space optical systems can also use such nodes.

Military customers primarily see laser communications as something to augment current systems, or have handy in case of jamming. But if the conditions are right, it could be a primary means to move data, Nigara said.

Leuer said that there are size, weight and power (SWAP) advantages as well. Sometimes there is a “dramatic” difference over traditional radio systems.

“The SWAP advantages are a significant driver, and will drive a lot of the market to this technology,” he said.

Hamid Hemmati, director of engineering for telecom infrastructure at Facebook, said at the Milcom conference that Japan and Europe were already sold on the benefits and maturity of the technology. It is time for U.S. organizations to do the same.

Early failed tests in the 1970s and 1980s gave the technology a “black eye” in the Defense Department community, he said. But the state of the art is much better now with the new generation amplifiers, lasers and acquisition tracking.

“Everything you need for laser comms is now available and qualified for air and space. It’s not a problem,” he said. “It’s on this side of the ocean where people are still arguing if the technology is ready and can be used.”

“It is a big problem, there is no question,” he said. That can be solved by spacing three ground stations in a cluster about every 400 kilometers apart, he said. That is normally enough space that there will be different weather patterns. There is a 95 percent probability that one ground station will be clear at any given time.

Leuer said: “One of the reasons we would like to see commercial take off here is to drive down the cost of this technology so we can offer it to our DoD and civil customers like NASA.” The space agency is onboard with deploying the technology on its systems, he added.

Leuer didn’t completely agree that the technology was ready. There is still work to be done on networking, or the ability to switch traffic between ground segments as needed and anticipate which node transmissions have to go to. Boeing is researching these problems, he said.

The company is partnering with the Jet Propulsion Laboratory to work on the atmospheric problems, and has an ongoing test aboard the international space station.“That is the one problem we need to retire yet before we see really significant adoption,” he said.

* This article was originally published in the November 2014 issue of National Defense Magazine.