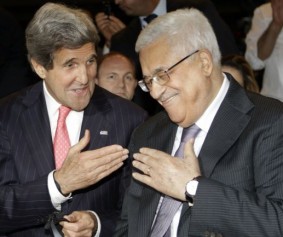 In Kuwait, after 10 failed trips to negotiate peace between Israel and the Palestinian authority, Secretary of State John Kerry proudly declared “Everywhere I go, even here today, everybody I talk to expresses gratitude to the efforts the United States is making … to try to make peace between Palestinians and Israelis.” However, as his predecessors, Kerry fails to recognize that the major obstacle facing his “efforts” is the Palestinian Authority’s absolute refusal to recognize the Jewish State of Israel, instead, demanding the fictitious “right of return” (to Israel) for all Palestinian refugees and millions of their descendants all over the world.

PA President Mahmoud Abbas, the purported moderate pragmatist, has stated clearly and repeatedly that the Palestinians will never give up what they consider their “right-of-of-return” for the descendants of Arabs displaced in the Israeli War of Independence. A recent report, in English, by Jonathan Halevi, whose vigilant coverage of Palestinian belligerence has been published for many years by the Jerusalem Center for Public Affairs on an easily accessiblewebsite, quotes Abbas’s typical statement:

The right of return is a personal option. No authority, state, the PLO, Abu Mazen [Abbas], or [other Palestinian] leaders have the right to take away a person’s right of return. Let there be [various] options and let the refugee choose. There is compensation and other possibilities. [Emphasis added.]

Accordingly, only a Palestinian refugee can choose to forego his/her “return” to Israel. Thus, no one else can make that decision for him, not even the PA.

While some dismiss this as Abbas placating the rejectionists-a claim naively made to dismiss Yasser Arafat’s calls to continue armed struggle against Israel during the Oslo years-his statements are fully in line with many similar pronouncements made by Palestinian leaders.

The most prominent example of this is the 2008 “Law of the Right of Return of the Palestinian Refugees” passed by the Palestinian parliament and ratified by Abbas. This law, among other provisions, declares that:

By now, it ought to be quite obvious that the Palestinians are not going to compromise one iota on the right of return, not least because Mahmoud Abbas literally signed a law authorizing his own assassination if he does in fact compromise this “right” in any way. Not even for the sake of reaching a peace agreement.

The Palestinians has for so many years advanced this purported “right” that the general public does not realize this “right” was made up not long ago. Thus, consecutive American and European governments continue to pressure Israel to submit to concessions that undermines its existence.

This fiction began with the Saudi-led Arab League fight against the Jewish State in 1945, years before Israel received international recognition. In December 1945, just months after the Saudis, with five other Arab countries established the Arab League, declared a boycott on “Jewish products and manufactured [goods] in Palestine.” The rationale behind this boycott was that “to permit them to enter the Arab countries would lead to the realization of the Zionist political objectives.” The growing attempts to boycott Israeli products, business and even academics are rooted in the Arab League’s 1945 declaration.

Six years after failing to defeat the newly established State of Israel in 1948, the Arab League founded (and funded) the Palestinian Liberation Organization (PLO) to terrorize Israel and the Jews. Soon after, the Soviet Union awarded the PLO (and other terrorist organizations) with advanced terrorist indoctrination, training and weapons, which the PLO also used to attack Western countries. While Arafat signed of the Oslo accord in September 1993, neither he, nor the PA, nor Abbas have recognized the Jewish/Zionist State of Israel.

While the Palestinians often bemoan settling for “22% of historic Palestine,” their insistence on the full right of return shows the very opposite. Indeed, this would turn the Jews into a minority even within the 1967 borders, let alone between the Jordan River and the sea.

Oblivious to all this, Kerry persists with his “efforts” to reach a framework agreement, even warning/threatening Israel of another Palestinian Intifada, all the while either unwittingly or willfully ignoring the Palestinian resolve to refuse any agreement that would lead to recognition of the Jewish State of Israel. Either Kerry insists on Palestinian recognition of the Jewish State of Israel, as his boss so fiercely announced last year, insisting all the while that their demand for refugee return is a no-starters. Failing to so and returning to the region would only encourage another intifada.