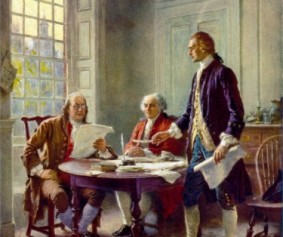 The 237th celebration of the American Republic is not as uplifting as was the declaration on 1776. Despite the sunny weather, July 4, 2013 is clouded by threats to independence within and without the U.S. We can always celebrate its past, of course, but the present is altogether clouded by bad news internally. The rapidly wanning power of the U.S. globally, doesn’t help either.

It begins with a president who “presides” rather than governs and would rather imitate the failures of Europe and apologize to its enemies for his country’s historical successes.  Accordingly, he has thrown the U.S. cultural, political, and economic babies out with the bathwater. Somehow, he must have expected the world to become less ugly for his efforts.  That it has become uglier still hasn’t seemed to have bothered him much.

Throughout its existence, ACD/EWI has been concerned with maintaining the unique liberties afforded by the Constitution, the U.S. economy, its national security and its place in a world that remains largely unstable and unfree and full of actors willing to challenge those things.

Since 2008, these concerns have become greatly amplified. There is no need to list every concern and complaint here. Indeed, this would take far too long and be too depressing. We will mention only four.

The U.S. Role in International Politics

Events of the past few days in Egypt have demonstrated the consequences of the U.S. failure to understand and influence the Arab Spring.  Our precipitous withdrawal from Iraq and Afghanistan have signaled that there is no cause for which the United States will project its power.  Accordingly, everyone can do whatever they like: “We favor no particular party.”  Our claim of “having Israel’s back” has become a hollow one. We seem indifferent for the continuation of Assad in Syria, or Iran’s acquisition of nuclear capability.  Doing nothing to stop the march of radical Islam and often lending it support, or failing to counter Russian and Iranian influence in the region is something we’ll have to pay for one way or another.  Watch for China to become the armory for and guarantor of our ostensible allies Saudi Arabia, Turkey and Qatar.

Meanwhile, the U.S. has withdrawn from other regions as well.  This is even true of the “Asia pivot.”  There, our professed interest has already proved hollow, as we have less leverage than ever with China and regional allies who feel more insecure than ever as we fail to respond to Beijing’s South China Sea claims.  Less influence in Asia and Latin America (where we’ve done nothing lately) will have economic ramifications domestically. And with commercial espionage on the rise, new axes of power will interfere with our ability to trade and American investments abroad will be threatened

In addition to the strategic security considerations mentioned above, there is the matter of security at home. Our borders’ security has not been addressed despite acute concerns which have been amplified by drug-cartel-related criminal activities.  Our cyber defense is much talked about and in stern language, but it remains even more porous than our borders. We have renounced the War on Terror, host known terrorist leaders at the White House, and negotiate with HAMAS and Taliban.

Recent revelations illuminate the fact that our government is more suspicious of us than of our explicit foreign enemies. That surely is what the recent IRS and DOJ scandals tell us. The current administration fails to keep our security secrets, and is willing to trade them away to foreign powers for our share in “international governance.”

Highly illustrative of its lack of concern for real domestic terrorist events is what we witnessed before, during and in the aftermath of the Boston Marathon bombing.  No efficient focus on possible Islamist threats, no keen worries about the obvious uptick in possible terrorist attacks created by the proliferation of the global jihadist movement. Locking down a major city for days (at the cost of at least $600 million a day to its economy), then pronouncing the Tsarnaev brothers as “home grown” terrorists, neglecting to blame Islamism and its many preachers.  The human and financial cost of Boston was enormous; but, so what?  It was just a couple of “disappointed immigrants” and it surely couldn’t happen again.

Along with impositions on American political freedom occasioned by heightened surveillance of ordinary citizens and letting terrorists through our fingers has come the creation of political license for some and curtailments of free speech.  The IRS won’t give you a bit of trouble if your organization has “progressive” or “I like Obamacare” in its name, but please don’t use words like “downsize government” or “conservative” or “patriotic.”  Anything may be said about Christians, Jews, and conservatives, but you can go to jail for making a silly movie about Mohammed. Politically correct campus hate-speech codes have multiplied and become more strict and, therewith absurd.

Islamism as an inspiration for terror has been expunged from our military and law enforcement counter-terrorism manuals.  The Fort Hood shooting is still a work-place incident.  The government either misnames, obscures (c.f., Benghazi) or relegates Islamist incitement and activities into comparative insignificance. Matters of national security, as with the NSA leaked secrets are played-down, as witnessed by President Obama’s latest statements about how the repatriation of NSA-leaker Edward Snowden is below his pay grade.

Our heritage of economic freedom has also been under attack.  Above all, that freedom depends on the security of our financial markets and the privacy of, well, private property.  Both have been neglected of late.  As noted above, commercial espionnage occurs with greater and greater frequency. That and simple cyber crime is costing us billions annually. Since the advent of High-Frequency Trading, the
financial markets have experienced new levels of insecurity. The best the SEC can do about it is to plan for next-day scrutiny of trades that now occur in fractions of a second, meanwhile implementing new regulations on the financial sector that will cost it billions over the long haul.  And government still hasn’t figured out even step one of efficiently cooperating with the private sector in defense of our economic well being against cyber and other depredations.

Of course, the list could go on and on.  What’s striking about the above is how little of it strikes the average American as calamitous and dire.  We cannot help but put this down to administration demagoguery and a media that doesn’t tell it like it is anymore.  As the cliché goes, we’ve been asked to “go about your own business: nothing’s happening here.” Apparently, that’s working, but not with us.

There will be this year, as always, a celebration of Independence Day on the Capitol Mall.  We may celebrate along, but we have to wonder if our defeatist administration will do anything more than pretend that it is, too.

The Fourth of July President

Who else, but someone born on July 4?

Calvin Coolidge, who became the 20th President, was born on the Fourth of July, as if Divine Providence had decided he was to be the embodiment of basic American values. As it turned out, he was.

He was born in 1872 to a long line of farmers who scratched out a living from the thin soil of Vermont. The residents of Plymouth Notch took it for granted that hard physical work was part of their destiny. As a boy, Calvin was no exception. Chores around the home and farm were part of his daily life.

Public service was also a birthright. Calvin grew up to believe that honest and earnest public service was the highest calling. He had an almost sacramental view of the democracy of the town meeting and, later, by extension that of larger deliberative bodies. No wonder. His father was a role model. In addition to his involvement in running the town, he was a justice of the peace and state legislator.

The characteristics that we think of as ideal American ones became his through example: thrift, modesty, self-reliance, tolerance, morality, and civility. Even in today’s age of relativism and situation ethics, such characteristics are widely admired.

These traits, combined with shyness, led him to use words carefully and economically (in public life he became jokingly known as “Silent Cal”). When one reads his speeches (he wrote his own), the value of this approach to communication comes through strongly. He did not use more words than were necessary to describe an idea. The resulting clarity made many people realize that he was dispensing common sense.

After finishing college at Amherst he read law and began to practice it in Northampton, Massachusetts. Public service also called, from city council to mayor, the state House of Representatives, state Senate president and lieutenant governor; he went on to become governor. In 1919 the Boston police went on strike. After the directly responsible authorities dithered, Coolidge, using the State Guard, stepped in and quickly brought it to an end. Nineteen policemen were fired.

When Samuel Gompers, head of the American Federation of Labor, asked him for leniency for the strike’s ring-leaders, Coolidge replied, “There is no right to strike against the public safety by anybody, anywhere, any time.” This statement brought him into national consciousness – and politics.

In 1920 he become Warren Harding’s vice-presidential running mate. Harding, who was later vilified by the Left, managed to create the Bureau of the Budget (now the Office of Management and Budget) to coordinate budgets of all Executive Branch units. Coolidge was able to use its creation to good effect in reducing expenses and providing balanced budgets.

When Harding died unexpectedly on August 2, 1923, Coolidge was sworn in by kerosene lantern by his father, a justice of the peace, in the family parlor at Plymouth Notch. He lost no time in taking hold of the reins of government.

He inherited Andrew Mellon as Secretary of the Treasury. Mellon had been engineering sharp income tax rate reductions. Coolidge began allotting several hours a week on his schedule to working with Mellon and his budget director to cut, squeeze, and trim expenses to get the federal budget under control and provide surpluses.

Coolidge believed that, in normal times, the government should get out of the way, for the most part, and let the private sector – the people – build and expand economic prosperity. He said, “I want the people of America to be able to work less for the government and more for themselves. I want them to have the rewards of their own industry, This is the chief meaning of freedom.” Would that Barack Obama had a hearing aid to overcome his tin ear that blocks such messages.

Upon Coolidge’s early death in January 1933 (just short of age 61), humorist Will Rogers wrote this tribute: “By golly, you little redheaded New Englander, I liked you. You put horse sense into statesmanship.”