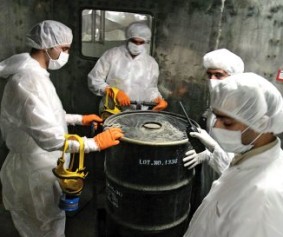 Reported division between the United States President and his Secretary of State regarding American intervention on behalf of Syria’s Sunni opposition, will afford Obama deniability for the predictable horrific results. Most importantly, it diverts attention from the Administration’s deliberate failure to stop Iran from finalizing its nuclear weapons capabilities.

The Administration’s pretense that the White House does not always dictate U.S. foreign policy is nothing new. Yet, the gullible media is buying into the story. Incredibly, the Financial Times attributed the President’s widely reported hesitation in supplying advanced weapons to Assad’s opposition to Obama’s “Hippocratic instinct” (do no harm). Does it mean that John Kerry on his own committed the U.S. into giving “urgent military support…each country in its own way,” to Syrian opposition groups? Hardly.

According to the Los Angeles Times, “CIA operatives and U.S. special operations troops have been secretly training Syrian rebels with anti-tank and anti-aircraft weapons since late last year… at bases in Jordan and Turkey.”

Qatar’s PM Sheikh Hamad bin Jassim bin Jaber al-Thani declared that the Friends of Syria group decision to “provide all necessary material and equipment to the opposition on the ground… may be the only means of achieving peace.”

He didn’t specify which “opposition on the ground” group gets the weapons. However, in an earlier statementhe noted, “you can’t guarantee that one weapon or another may not fall, in that kind of a situation, into hands that you don’t want it in.”

For Qatar, as seen all along in Gaza and recently in Libya, the right hands are those of Islamic militants, the likes of those who killed the four Americans in Benghazi last year. The Federal Research Division of the Library of Congress released a report on August 2012, which documents how “al-Qaeda adherents in Libya used the 2011 Revolution to establish well-armed, well-trained, and combat-experienced militias.

Supplying sophisticated arms to an unprofessional, hastily put together group in order to defeat the highly trained, well equipped loyal Syrian army aided by Iranian “advisors” and Hezbollah terrorists, all but guarantees that dangerous weapons will fall into the wrong hands. This will contribute to the chaos and lengthen bloody fights, no matter which Islamist side – Sunni or Shia – wins in Syria. Moreover, American made weaponry will be used to further the jihadists war, destabilize the region and even attack Americans. But none of this seems to concern the Administration. But then, it doesn’t seem disturbed by the abysmal outcomes of U.S. mistakes in Iraq and Afghanistan.

Replacing military dictatorships in Iraq, Libya and Egypt with Islamist tyrannies contradicts the strive to advance the “four essential human freedoms” that Franklin Delano Roosevelt sought to achieve in the aftermath of the Second World War.

Obama’s ostensible support of Muslim Brotherhood “reformists” is now leading to replacing Assad’s military dictatorship’s violence with “peace” by oppression under barbaric Sunni and/or Shi’ite tyranny. More importantly, it allows Iran to ready its nuclear weapons, threatening the survival of Israel and what until not long ago was considered an American interest, in the Middle East and beyond.