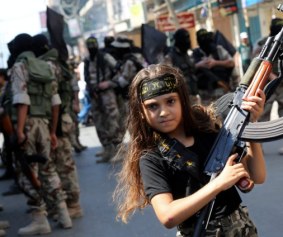 Sunni and Shiite jihadists have never shied away from using children as fighters (martyrs)  Recall Iran’s use of tens of thousands of children to clear the Iraqi mines during the war in the early 1980s. More recently, reports on similar exploitation of children by ISIL have made recent headlines.

The Meir Amit Terrorism Information Center’s latest report shows how Hamas use of children “during Operation Protective Edge” The report document how Palestinian terrorist groups in Gaza exploited “children and teenagers… as auxiliaries and operatives.” While the report says “The extent of the phenomenon is still unclear,” it is clear that for Sunni and Shiite terrorist, exploiting children in the name of jihad is nothing new. Though the Palestinians terror groups exploitation of children has an even more sinister twist.

1.   An examination of about a third of the names of Palestinians killed in Operation Protective Edge revealed several instances of children and teenagers serving as military operatives in the terrorist organizations. The examination also revealed instances in which the ages of Palestinian casualties were falsified by Gaza’s Hamas-controlled ministry of health. For example, boys aged 15 and 17 were integrated into the terrorist operative networks; the age of a nine year-old terrorist auxiliary was listed as 24; and a terrorist operative in his twenties was listed as 13 years of age.

2.   Children and teenagers in Gaza’s educational system undergo basic military training in the schools and summer camps.[1] Using them as auxiliaries and sometimes as operatives, in ITIC assessment, is not limited to isolated cases although at this stage it is difficult to estimate the extent of the phenomenon.

Using a Child as a Terrorist Auxiliary and Hiding His Age

3.   The ITIC’s ongoing examination of the names of Palestinians killed in Operation Protective Edge revealed the case of a 9 year-old child, who was assisting his uncle, a senor Hamas operative in the Nuseirat refugee camp (central Gaza Strip). The boy and his uncle were killed in an IDF attack. They were listed as casualties by the Palestinian ministry of health. The boy was Obeida Fadhel Muhammad Abu Hweishel, according to ITIC research, was nine years old (born in 2005). However, according to the list issued by Dr. Ashraf al-Qudra, spokesman for the Hamas-controlled Palestinian ministry of health in the Gaza Strip, was 24 years old (See pictures below). In ITIC assessment, listing his age as 24 was not an innocent technical error but rather a deliberate falsification whose objective was to conceal the fact that a child was exploited for terrorist activities.

4.   The Facebook picture shows the body of the child (referred to as “the child shaheed hero”) wrapped in a shroud bearing the Izz al-Din al-Qassam Brigades insignia and wearing an “Al-Qassam Brigades” headband. On July 23, 2014, the Hamas forum reported that he had supported his uncle, ‘Adel Muhammad Abu Hweishel, in his jihad missions. The uncle, who was also killed, was a commander of Hamas’ rocket network in the Nuseirat refugee camp (Hamas forum, July 23, 2014).

Obeida Fadhel Muhammad Abu Hweishel (highlighted), nine years old, listed as 24 by the spokesman for the Hamas-controlled ministry of health. 5.   The Palestinian ministry of health listed Wasim Rida Salhia from Khan Yunis, as killed on July 18, 2014. His age was given as 15. ITIC examinations revealed that he was, in fact, 15 years old, having been born in 1999. He that he was an operative in a Fatah terrorist network called the Abu Rish Brigades. 6.   The Palestinian Islamic Jihad (PIJ) list of its operatives killed in Operation Protective Edge included (with picture) Anas Qandil, 17 years old (Saraya.ps, September 2014). An ITIC examination verified that he was, in fact, 17. Anas Yusuf Qandil was an operative in the Jerusalem Brigades, the PIJ’s military-terrorist wing. He was killed on July 12, 2014. His name and real age are also on the Palestinian ministry of health list. 7.   The Palestinian ministry of health listed Ibrahim Jamal Kamal Nasr, from Khan Yunis, who was killed on July 18, 2014, as a “13 year-old boy.” In reality, he was in his twenties and a terrorist operative in Fatah’s Abu al-Rish Martyrs Brigades. In ITIC assessment it was not an innocent technical error but the deliberate insertion into the list of a “13 year-old boy” with a name similar to that of the terrorist operative who was killed. Pictures of Armed Children Who Were Killed

8.   The Facebook page of the al-Batash family, whose members were killed during Operation Protective Edge, posted pictures of two of its children with guns and an RPG launcher. The picture was entitled “Young jihad fighters.” In ITIC assessment the picture did not necessarily indicate the involvement of children in supporting terrorist activity. Palestinian children are often photographed holding weapons to send the message that the younger generation will continue the armed campaign against Israel.

9.   The Facebook page dedicated to Salah Abu Hassanein, a senior PIJ commander, posted pictures of his son, Abd al-Aziz Abu Hassanein, 15, who was killed along with his father (the pictures many have been taken at a PIJ summer camp).