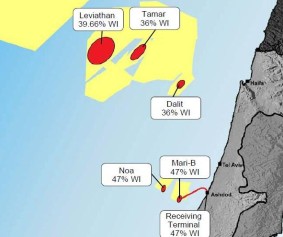 On September 4, 2014, Israel signed a letter of intent to sell natural gas to Jordan.

“In mid-November terrorists active in the northern Sinai Peninsula blew up and thus shut down the Arab Gas Pipeline that provides Egyptian natural gas to Israel and Jordan. The saboteurs had been forced to dig a deep hole in order to reach the pipeline buried under six feet of sandy waste.  It was the seventh such attack in 2011.

“The first attack on the Arab Gas Pipeline was carried out in early February 2011.  It happened only twelve days after the initial confrontation in Cairo that pitted anti-government protestors against the security forces of aging Egyptian President Hosni Mubarak. (Kamal Al-Hilbawi, an Egyptian Muslim Brotherhood leader was quick to blame the attack on Israel.)  Because the explosion damaged the pipeline well before it reached the El Arish distribution station in northeastern Sinai, it halted supplies to both Israel and Jordan.  The attack was downplayed in Jerusalem despite the fact that Israel was then receiving 4 percent of its natural gas supplies from Egypt.

“Importantly, the distribution of Egyptian natural gas to Israel and Jordan had been a constant reminder of the benefits that derived from the Camp David peace accord of 1979, and the “sabotage” was a strong indication that the neutrality of the Sinai peninsula, and the security of the Egypt-Israel border, could no longer be taken for granted.”—Rachel Ehrenfeld

With the start of a new millennium Israel had taken steps to secure a dependable supply of natural gas and end the nation’s dependence on coal-fired plants. The problem seemed resolved once Egypt began to produce natural gas from offshore fields found north of Port Said. Egypt constructed a pipeline to move natural gas across the northern Sinai Peninsula to El Arish, located on the Mediterranean coast and very near the Gaza strip. Once that was completed, it was no great feat to construct an undersea pipeline to the coast of Israel north of Gaza. The result was of dual benefit: The gas provided a substantial economic return to Egypt, and it halved the Israeli cost for energy per kilowatt-hour. While the Egypt natural gas pipeline is owned and administered by GASCO, its Israel length has been operated by the East Mediterranean Gas Company (EMG), an Egyptian-Israeli company. In 2005 GASCO and EMG signed a 20-year deal which would provide Israel a continuous and dependable supply of natural gas.

In Egypt itself the pipeline was the subject of debate. Most of it focused on the argument that Egypt was receiving a bad deal in the price set for of natural gas sales to Israel. In October 2010 a civic organization sued top Egyptian government officials who had just signed a new pricing arrangement reached by Egypt’s East Mediterranean Gas Company and Israel Corp. According to the Israel Corp, a contract to extend the sale of gas for twenty years was signed, and it would return to Egypt an estimated $5 billion over that time.

The civic movement’s effort to bring greater transparency and a better price for the sale of Egyptian gas was soon overtaken by the revolutionary events of January 2011. Egypt and Israel did not have long to wait before pipeline protests were held in Cairo, Alexandria and Port Said. There then followed the sabotage of the Sinai pipeline by Islamist radicals.

When Mubarak was brought to trial before the Supreme State Security Court in January 2012 to review the sale of gas to Israel, his lawyers denied that gas had been sold to Israel below market price. The Supreme Administrative Court found that the export of gas to Israel was actually, “a sovereign decision, and that Mubarak’s only role was to approve the deal.” In fact, Mubarak had actually opposed aspects of the most recent gas contract, and he had met with Israel Prime Minister Ehud Olmert to work out a new agreement more favorable to Egypt. Consequently, the price for Egyptian gas actually doubled the price originally agreed on. (Al Masry Al Youm, Egypt, 21 January 2012)

With the “Arab Spring” and through October 2011 the pipeline attacks had cost Egypt losses in excess of $80 million in Egypt alone, and the loss of income from sales of gas to Israel and Jordan was even higher. And before the pipeline could be repaired for the seventh time, an eighth explosion occurred just hours before Egypt’s first free election since President Hosni Mubarak was ousted.

The Response of Jordan and Israel

From El Arish the 36″ Arab Gas Pipeline was extended to Jordan, and the official opening was celebrated by President Mubarak and Jordan’s King Abdullah II on 27 July 2003. Phase 1 of that project entailed a 150 mile length that connected El Arish with Taba in the Egyptian Sinai, and Taba with Aqaba, Jordan. The final leg was completed after ten miles of undersea pipeline (that reached a maximum depth of nearly 3,000 feet) was laid. (The subsea length had obviated the need to cross Israel territory in the Negev.)

The cost of the so-called First Phase was said to be $200 million; still, the project was expected to return to Egypt some $500 million annually within five years, and an even greater return was expected once plans were completed to push the pipeline forward to Syria and then Lebanon.

The pipeline’s Phase 2 continued from Aqaba port to El Rehab, Jordan, at a point 15 miles south of the Syria border. That 240 mile $250 million project was completed by 2006, and was constructed by a consortium of Egyptian companies that including EGAS, Petrojet, and the Egyptian Natural Gas Company (GASCO). GASCO, founded in March 1997 was the lead agency with a history of involvement in gas transmission, processing, distribution and marketing. Throughout, the Egyptian companies would operate, develop, and maintain the pipeline for a period of 30 years, with an optional extension period of 10 years. After that the pipeline would be transferred to Jordan. It was the first time Egyptian petroleum sector was involved in a project located outside of Egypt.

Next, Phase 3 would continue from El Rehab through Syria to its border with Turkey, and then sweep left to arrive at Panias and Tarablous in Lebanon. In October 2009 that pipeline extension from Dabbosia, Syria, to Lebanon, and Tripoli’s Dir-Ammar power station was supplied for the first time with Egyptian natural gas. An extension into Turkey was to be the subject of further (and still pending) discussions.

Obviously, the interruption of natural gas supplies from Egypt also had its effect on Jordan. In Amman, frustrated government officials stated that Jordan could no longer afford the Egyptian outages which had a negative impact on the economy of some $2 million a day. The disruption in the delivery of Egyptian gas led Jordan to search for other sources from which to buy it oil and diesel fuel. Within months it was purchasing those resources for use in its Aqaba power plants.

Israel, for its part, was less dependent on Egyptian gas, but it too depended on the Egyptian source to generate 40 percent of the country’s electrical use. Following the sixth attack on the Sinai pipeline, Egypt was forced to shut down for some time the movement of natural gas to Israel. Thus Israel, like Jordan, was forced to replace Egyptian imports with more expensive purchases on the spot market. The Israel Electric Company hiked electricity prices by nearly 10%. Meanwhile, Israel was not idle. Its search for new energy sources had led it to avidly pursue locally-developed alternatives to Egyptian gas. And Israel had just sponsored activity that had located what appeared to be an extensive offshore Mediterranean gas field. And despite the marine boundary claims that had begun to impact Levantine geopolitics, Israel was determined to access the precious resource. By May 2013 Israel’s politicians were arguing over how much natural gas from the Mediterranean field should be exported.

In early August 2014 the Egyptian press reported that the Sinai gas pipeline had been attacked. It was the twenty-fifth time the pipeline had been exploded since the overthrow of the Mubarak regime. By then the attack had no effect on Israel; it reported in 2013 that the nation had reached self-sufficiency in natural gas. As usual, the major damage done was to the movement of natural gas through the subsea pipeline that connects the Sinai Peninsula with Jordan.

Less than a month later Al Ahram reported that Israel had just signed a letter of intent to sell natural gas to Jordan.

Houston-based Noble Energy, Inc., the production entity that administers the Israel offshore natural gas deposit in its Leviathan field, announced that the agreement entails the sale of 1.6 trillion cubic feet of natural gas to Jordan’s National Electric Power Company, Ltd., over a 15-year period. Israeli media has reported the deal is worth some $15 billion, and will come on line in 2017.

The Israeli-Jordanian agreement was yet another blow to the enfeebled Egyptian economy, which is still struggling to control the Islamist radical groups in the Sinai.