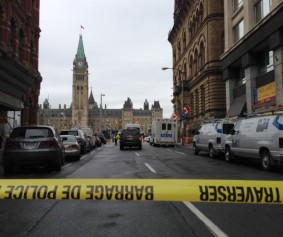 On Wednesday, Mohamoud Jimale was arrested at the prime minister’s office in Ottawa for bringing a suspicious package into the building, “threatening people and praying in foreign language.”  The bomb squad was called, all streets in the vicinity were closed for hours, and Jimale, who has criminal background, was charged with “one count of uttering threats and one count of mischief.”

Vic Towes 36-page report, “Building Resilience Against Terrorism,” led off by pinpointing Islamist extremism in general and “‘homegrown’ Sunni Islamist extremists” in particular as having “identified Canada as a legitimate target or [having] directly threatened our interests.”

He elaborated: “Recurring instances of violence linked to Sunni Islamist extremism have punctuated the development of the terrorist threat since at least the 1970s….Despite having been under intense pressure for the past decade, foreign-based Sunni Islam…extremist groups have explicitly identified Canada as a legitimate target for attacks or have taken actions that threaten Canada’s international interests.

“Al Qaeda, led by Ayman al Zawahiri since the death of Osama bin Laden in May 2011, remains at the forefront of Sunni Islamist extremism and continues to serve as an ideology and inspiration for potential terrorists worldwide.

“Radicalized Canadians have also travelled to global hot spots like Pakistan, Somalia and Yemen, training or fighting with Sunni Islamist extremist groups. These individuals could participate in terrorism abroad, return to Canada and push others to violence, or return to Canada to carry out terrorist activities on Canadian soil.”

Canadian Muslim mosques and organizations – with strong affiliation to similar American groups, have been producing jihadists for years. Here are but a few recent examples:

The January 16, 2013, al-Qaeda attack on the Tigantourinegas facility near in Amenas, Algeria, included two friends from London Ontario. Ali Medlej, 24, and Xris Katsiroubas, 22, were killed, during the attack. Another Canadian was identified as one of the leaders of the attack.

Closer to home, in April 2013, Canadian law enforcement arrested two Muslims (who resided for years in Canada) fortheir plot to derail a train that runs between New York City and Montreal, which would have killed and wounded hundreds of people. Canadain authorities stated “the men were operating with the support and guidance of “al-Qaeda elements in Iran.”

ACD fellow Jonathan Halevi, who studies Islamist activities in Canada, notes: “The threat of terrorism in Canada has increased in the past two years, signified by the growth of the number of Canadian citizens willing to enlist in terrorist activity inspired or guided by radical Islamic terrorist groups. The ‘export’ of Canadian terrorists (estimated at between dozens and hundreds) to the various jihadi theatres of strife is likely to intensify the threat once they return home to Canada having acquired knowledge and experience and networks of ties to terrorist organizations.” It would not be unreasonable to assume that the U.S. is facing a similar threat, though don’t expect any public statements about this from the current administration.

Canadian Prime Minister Stephen Harper was severely criticized for stating two years ago, a decade after 9/11, that the biggest security threat to Canada is Islamic terrorism. In an interview with CBC News Harper said that “There are other threats out there, but that is the one that I can tell you occupies the security apparatus most regularly in terms of actual terrorist threats. … The major threat is still Islamicism”.

Canada’s annual Public Report on the Terrorist Threat to Canada in 2012 acknowledged that no attacks occurred within Canada in 2012, but the likelihood of terrorism within Canada has increased in the past year due to external radical influences, particularly al Qaeda and its affiliates, as well as from Canadian individuals travelling abroad to participate in jihadi terrorist activity.

The conservative Canadian government is accused by some of its detractors of fanning Islamophobia and falsely highlighting the threat of “Islamic terrorism” on political and ideological grounds. They maintain that Muslim terrorists do not represent true Islam, that they misinterpret Islam, and are a small minority within the general Muslim population in Canada.

How serious is the threat of homegrown Islamic terrorism in Canada? Are we witnessing an ever-increasing trend as asserted by the government and the security apparatuses, or are these simply marginal individuals as government critics allege?

In order to examine this question we shall introduce the facts that are not in dispute. Since July 2012 there have been several reported cases of Canadian citizens involved in terrorist activity, or suspected of participating in terrorism, or enlisting with semi-military groups, some of which are affiliated with al-Qaeda in Syria. Following is a detailed list of those individuals:

January 2013 – Ali Medlej and Xristos Katsiroubas (a Christian who converted to Islam), residents of London, Ontario, joined al-Qaeda, killed in a suicide attack in Algeria after participating in the murder of dozens of civilians.Muhajid ‘Ryan’ Enderi, additional member of this group from London, Ontario. Traveled with them abroad and has since disappeared.

April 2013 – Chihab Esseghaier, resident of Montreal of Tunisian descent, and Raed Jaser, resident of Markham, born in Kuwait of Palestinian descent, arrested on suspicion of planning to blow up VIA train on Niagara bridge on its way to the US. Ahmed Abbasi, Tunisian citizen, resided in Canada between 2010-2012, arrested in US on suspicion of involvement in plans to blow up the train.

May 2013 – Unidentified Individual, presumably Canadian resident, killed in Syria while planning to carry out a terrorist attack on behalf of a group identified with al-Qaeda.

September 2013 – Ali Muhammad Dirie, Toronto resident of Somali descent. Joined Jabhat al-Nusra in Syria, affiliated with al-Qaeda and killed in action. Dirie was convicted of involvement in the Toronto-18 terrorist plot in 2006 and served a long prison term.

The list comprises fifteen citizens or permanent residents of Canada, two individuals who resided in Canada for several years, and two unidentified individuals who may have been Canadian citizens. Five (36 percent) of the Canadian citizens were Christians who converted to Islam, including two who are suspected of planning a terrorist attack within Canada, one who carried out a suicide attack in Algeria, one suspected of having ties to al-Qaeda, and one who enlisted with a Syrian rebel group affiliated with al-Qaeda.

The main involvement of Canadian terrorist activists was in jihadi activity around the world: Syria, North Africa, Somalia, and against Israeli targets (Gaza, Bulgaria). Two large-scale terrorist attacks were planned within Canada in the past year, one involving the train traveling to the US, and one against the parliament building in Victoria, BC. Sunni Islamic groups were involved in the overwhelming majority of incidents, with only one incident linked to the Shiite Hezbollah organization.

The above list confirms that the threat of terrorism in Canada has increased in the past two years, signified by the growth of the number of Canadian citizens willing to enlist in terrorist activity inspired or guided by radical Islamic terrorist groups. The “export” of Canadian terrorists (estimated at between dozens and hundreds) to the various jihadi theatres of strife is likely to intensify the threat once they return home to Canada having acquired knowledge and experience and networks of ties to terrorist organizations.

* Lt. Col. (ret.) Jonathan D. Halevi is a fellow at the American Center for Democracy