The Myth of Islamist “Lone Wolf”

So much for the Islamist “Lone Wolf” nonsense. ISIS propaganda is finally getting some attention. Even the New York Times published an op-ed asking  “Why Tolerate Terrorist Publications?” citing “Patrick Henry’s famous liberty-or-death choice “in the short run, one cannot enjoy freedom of speech, freedom to worship, freedom of the press unless one first enjoys the freedom to live.”  Yet, we let the Islamist abuse Americans right to free expression to incite their followers to shut us up for good.

Congress should not wait until/if ever the president  identifies (radical) Islam as the enemy. For whatever reason he considers their virulent propaganda as free speech.

But Jihadist attempts to incite, and their instructive propaganda to commit crimes and intimidate, are criminal acts that are not protected under our right to free expression.

To ensure that we live to enjoy our freedoms, Congress should re-visit the legal provisions to stop incitement and review their enforcement.  Jihadist incitement on the Internet, social media and elsewhere should be outlawed and servers allowing it should be severely penalized.

The use of the Internet and social media to call on individuals and groups to join the jihad in the name of the prophet Mohammad and Allah, is nothing new. It has been used by Shiite and Sunni radicals alike. Yet, this administration and the media choose to ignore it.

Palestinan jihadist propagana has tradintionally targeted the Israeis and Jews. Dreesing it up with anti-colonialism, quasi nationalistic rethoric rekindled deep-seated anti-Semitic sentiments in many Westren nations. Instead of condeming the Palestinians, the Western maida and nations went along with the Palestinian propaganda that terrorist attacks on Israeli childeren, women and the elederly are always justufied. Many years of willful blindness towards the thinly desguised jihad, led the West to unwittingly increas their symphaty and outright support to Palestinian atrocities.

American and other Westre political leaders and the media have been mostly ignorining  Palestinians’ political and religious leaders’ calls to attack Jews/Israelis with knives, car, and bombing in public places. Such attacks are explained away by the U.S. and others as  “expressions of furstration” against Israeli presence on its legitamte land. Israeli efforts, including evidence to debunk this propaganda were always met with suspicion.

Unlike the Palestinians whose goal is the removal of the Jews from their land with whatever means, ISIS  calls for the removal of infidels everywhere to create the Muslim Caliphate. Their Internet and social media propaganda, much like the Palestinians’ also calls to kill infidelds everywhere, with whatever means available. Their graphics and videos of beheading, stoning, drawning and torching of “infidel” hostages, serve to recuit new members everywhere. But their instructions on how to use knives to cause more harm to their victims, how to build bombs, how to set fire and which locations to attacks, are no different than that of the Palestinians. Refusing to acknowledge the radical poltical Islamist Jihad agenda, the West decided to use the oxymornix label “lone wolves” for ISIS jihadists.

When al Jazeera first aired ISIS behading of Westren hostages and more videos of the groups’ barbaric murders were published on the Internet, the Western media was “shocked, shocked.” Yet, neither the New York Times nor any major publication in the United States, not to mention Europe, has made the logical leap of acknowledging that the Palestinians and ISIS are made of the same cloth. 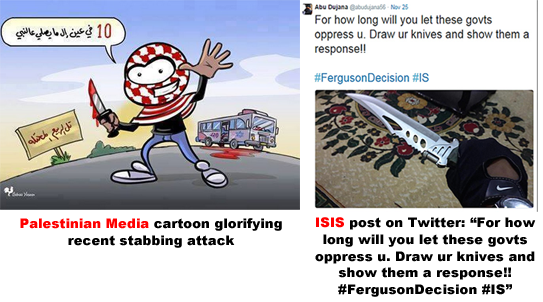