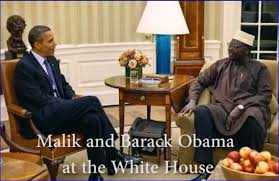 In a recent report on Egyptian television Tahani al-Gebali — the former Chancellor of and present advisor to the Constitutional Court of Egypt — made the astounding claim that, “the reason the United States cannot fight the international organization of the Muslim Brotherhood [Ikhwan al-Muslimun] is because the brother of U.S. President Barack Obama was intimately involved with the Muslim Brotherhood. She claimed that President Obama’s brother  Malik Obama was in fact “one of the architects” of the Ikhwan’s “major investments.”

Gebali is referring to Malik Abon’go Roy Obama (AKA Malik Abongo), Barack Obama’s half-brother.  Born in March 1958, he was the first child of Barack Obama Sr., from his marriage with Kezia Obama.  Malik was raised in Nairobi, and reportedly received an accounting degree from the University of Nairobi.  In his later years he seems to have divided his time between his tribal homeland on the shores of Lake Victoria in Western Kenya (where he made his home with his twelve wives), a shop near Nairobi where he operated an electronics store, and frequent visits to the United States.

Ostensibly born a Christian, his conversion to Islam has never been reported. However, in an exceedingly detailed history of the Obama family in Kenya, it was noted by a reputable member of a Missouri State delegation who visited the Obama family in western Kenya, “Obama’s relatives are the only Muslims in a village of 4,000 Christians and … Malik has a private mosque on his property.” (“Meet Malik Obama…,” Miri WTPOTUS blog, 19 September  2011.)

The same lengthy article notes that in December 2010 Malik (called Abdul Malik Hussein Obama) was featured in a Saudi Gazette article in which it was noted that “the US president has embraced Christianity while the rest of the family are Muslims and are leading Dawaa [Islamic outreach] work in Africa.”   Malik himself was called the “executive secretary of the Islamic Dawaa Organization in Kenya.”

The first meeting of Obama and Malik occurred some time in the early nineteen eighties.   They then met in 1985 when Malik was on an (unexplained) visit to Washington D.C.  The two half-brothers served as best men at their respective weddings.  Malik has visited the United States on many occasions and lived in America for a few years.  Today he maintains a private office in America and three offices in Kenya.   Well before the political ascendance of Barack Obama, Malik served as family spokesman in Kenya.  Never previously having played a major role in politics, in early 2013 he missed his half-brother’s inauguration as he ran for governor of Siaya county (as Malik Abongo) and was very badly thumped.

While Malik Obama has been a frequent visitor to Washington, it was not until recently that it became apparent that he was something much more than the head of an extensive Kenyan family, and the poor relative of the president of the United States.

In the West, the Shoebat organization recently implied that documents existed that could prove conclusively that his half-brother Malik Obama “works with Muslim Brotherhood leaders.”  The Shoebat organization had previously reported that Malik Obama was a member of the Islamic Dawaa Organization (the Munazzamat al-Dawa al-Islamiya) which it calls, “an arm of the Sudanese Government … led by President Omar al-Bashir, who is himself a member of the Muslim Brotherhood.”  (Information derived from Al Wafd, inter alia, and reported in the Western media.)  President Bashir has been an international pariah ever since the International Criminal Court issued in 1998 an arrest warrant claiming his participation in war crimes and crimes against humanity in the Sudan.

BACKGROUND ON THE ISLAMIC DAWAA ORGANIZATION

In the Sudan, the political opposition to the Bashir government has reported (but without documentation} that ever since his youth Malik Obama has been  a “close friend” of Sudan President and Muslim Brother General Omar al-Bashir.  More importantly, he has been called a protégée of General Abd al-Rahman Swar al-Dahab, the Islamic Dawaa Organization (IDO) leader. The General was the former Chief of State and Director of the Transitional Military Council that in 1985 ended the dictatorship of the increasingly eccentric President Jaafar Numaryri.

Swar al-Dahab himself is a renowned Muslim Brother and has for more than three decades served as Chairman of the IDO. He is a respected Islamist whose presence in major Muslim gatherings can almost be assured.  In addition, he has served as Chairman of the Board of Trustees of the IDO-sponsored, Islamist-dominated,  and Khartoum-based  International  University of Africa.  (N.B., at the recent meeting of the IDO in January 2013 Swar al-Dahab expressed his appreciation for the support of Sheikh Hamdan bin Rashid al-Maktoum, UAE Minister of Finance for the Al Maktoum Charity Foundation support for the IDO and the International University of Africa.)

The Islamic Dawaa Organization is no non-entity existing well out of the mainstream of the Muslim World.  In 1980 the IDO board of directors, fed up with the increasingly heterodox Muamar Qadafi and receiving the support of Saudi funding, moved the organization’s headquarters from Tripoli, Libya, to Khartoum.  There, under the leadership of General Swar al-Dahab and supported by the Muslim Brotherhood International, the IDO began to blaze an Islamist path that eventually spread its influence from the Horn of Africa to Northern Nigeria.  In the Sudan, the IDO supported the military cabal that overthrew a civilian government and brought General Omar al-Bashir to power in 30 June 1989. It supported without stint the war with the rebel southern Sudanese.

The Revolution ushered in the first Islamist government in a Sunni-dominated state. Under the direction of  Swar al-Dahab, the IDO announced it would increase its activity and “organize, finance and direct various Islamic oriented projects.”  In Sudan itself,  the IDO gave especial focus to the “Islamic Civilization Project,” a dawaa effort led by the Sudan’s large Ikhwan contingent.  (And one that had formerly dominated the National Islamic Front political movement of noted Muslim Brother Hasan al-Turabi.)  Sudan was to be transformed, “into an Arab-Islamic civilized Nation-state by the year 2000, and to whose end Islamic institutions, structures and Arab-Islamic institutions, structures and and Arab-Islamic traditions and customs have been created and imposed on all the Sudanese people, Muslims, christians and others.” (“Can there be a Sustainable Peace, Democracy and Development under Sectarian Political Islam?”, New Sudan African Society, n.d., 2003.)

Within a year of the 30 June Revolution Yusuf al-Qaradawi, the Sunni scholar and the Ikhwan’s theological spokesman, published his Priorities of the Islamic Movement in the Coming Phase.  The manifestoserved to underpin the emergence of the Islamist “revivalist” movement by which the Ikhwan as an organization and dawaa as a policy would serve as the vanguard in the move to restore Islam to its proper place in the world. While Qaradawi did not rule out the use of violence as a means to that end, he proposed instead a policy of wassatiyya, or a “middle way,” that would utilize dawaa on the one hand and dialogue on the other to achieve the movement’s political goals. Particular importance was given to the growth of the Islamic movement in the West (where the Ikhwan has succeeded beyond its expectations) and the importance of dawaa.

Nearly a quarter-century later, both Qaradawi and the IDO have grown in stature. Qaradawi funded the International Union for Muslim Scholars (IUMS) which includes Swar al-Dahab in its list.  Dahab also works as Qaradawi’s deputy in the co-called Union of Good, an international coalition of charities that has been “listed” by the United States because of its involvement with Hamas fundraising.

Indeed, Qaradawi’s policy still dominates throughout the Sunni world, and included among the vanguard of that movement is the International Council for Dawaa and Relief (IICDR), an international outreach organization financed by Saudi Arabia. The IICDR calls itself a “coordinate foundation” which includes more than one hundred Islamic non-governmental organizations (NGOs) and governmental organizations (GOs) from all around the world.  It is headquartered in Cairo, Egypt.   Swar al-Dahab is included in its board of directors, and its aims differ not at all from those of Khartoum’s Islamic Dawaa.  More recently, the IDO was a founding member of and works closely with The Union of NGOs of Islamic World (UNIW).

MALIK OBAMA AND THE DAWAA MOVEMENT

At first glance Malik Obama seems to have had a meteoric, and recent, rise within the Islamic Dawaa.  His wealth, if indeed he is wealthy–and the Ikhwan has no objection to wealth–is well disguised.  On the night of his half-brother’s election to the U.S. presidency, he hosted a celebration and was reported to have been in some economic difficulty to provide for scores of partiers.

Still, the fact that it is reported that Malik Obama serves as an IDO financier should not be surprising.  While the IDO can call on numerous wealthy Sudanese Ikhwan whose experience in finance is well known, the Muslim Brotherhood never misses a bet to take political advantage of a situation that would benefit both the organization and Islam itself. It does seem surprising that a Kenyan non-entity would achieve such status, but it is recalled that the Obama are members of the Lwo tribe, whose members are found in both the Sudan and Kenya.

At an IDO conference chaired by Swar al-Dahab and held in Khartoum on 10-11 February 2010, participants discussed the adoption of strategies in the planning and implementation of projects for Africa.  It was reported that at the meeting Abongo Malik Obama represented Kenya and, “expressed his gratitude towards Allah the almighty for giving him the opportunity to be a Muslim. According to Abongo, ‘his grandfather belonged to one of the earliest generations of Muslims in Kenya’.”  (“Democratization of the Muslim World,” FGN Bulletin No. 3, Istanbul, 2010.

Investigators have since found that the Washington address of the Barack H. Obama Foundation appeared to be bogus, and critics claimed it is unclear whether the funds are being used in Kenya for anything other than supporting the famously lavish lifestyle of Malik and his twelve wives.  Ironically, the Muslim Malik Obama has been the moving force behind the Barack H. Obama Foundation, which was named for the President’s father and a man who was at best an agnostic. On 30 May 2011 the Foundation applied for tax-exempt status and then had their approval signed less than a month later by IRS big-wig Lois Lerner. The application was conveniently backdated to cover the 30 months the Foundation had been soliciting tax-deductible donations without the IRS approval to do so.  Nothing was made of the photographs that appeared on the Foundation website depicting a meeting in the Sudan, a nation the U.S. government has listed, and still lists, as a “terrorist state.”

In Cairo Tahani Al Gebali continues her attack on the Muslim Brotherhood and has recently appeared on Egypt Television’sYoum 7 urging the Court to “open the files” and make clear the role of Malik Obama. As she put it menacingly, “We will carry out the law…, the Obama administration cannot stop us; they know that they supported terrorism. We will open the files so these nations are exposed, to show how they collaborated with them [the terrorists]. It is for this reason why the American administration fights us.”

And as far as Malik Obama is concerned, Al-Jebali continued to argue that Malik was “one of the architects of the major investments of the international organization of the Muslim Brotherhood.”

Jebali seems determined to continue the fight against Malik Obama, and as the saying goes…, “stay tuned.”

*J. Millard Burr is a Senior Fellow at the American Center for Democracy.