Islam and Security in Bosnia-Herzegovina* 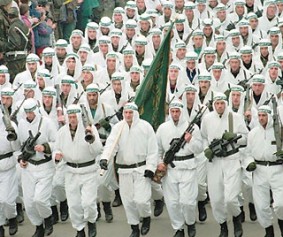 Eighteen years after the Dayton Agreement we hear little, if anything, about Bosnia. Though politicians such as President Bill Clinton and his envoy, the late Richard Holbrooke, were credited with ending the violence, it was the U.S.-led NATO military mission that drove the level of violence down and prevented the failure of the new political arrangements.

The Dayton Agreement created what has become crime-ridden Bosnia-Herzegovina and the Republika Srpska, which are overseen by the European Union’s Office of the High Representative (OHR).

While NATO and the West stopped the war, it did nothing to stop the growing tide of criminal activities that hold back the development of a civil society and the economy, or the Islamist influence in Bosnia, which is the subject of Ms. Lebl’s monograph (the foreword to which and summary are below).  Ms. Lebl’s work compliments ACD publications authored by ACD Senior Fellow J. Millard Burr and Gordon Bardos (here and here). — Rachel Ehrenfeld

Islam and Security in Bosnia-Herzegovina

Many observers viewed the military mission of the North Atlantic Treaty Organization (NATO) mission to Bosnia-Herzegovina (Bosnia), launched in late-1995, as a test of the international community’s ability to keep the peace in the post-Cold War world. This task proved difficult: The many obstacles to restoring stability and growth in Bosnia have been thoroughly dissected over the years, from the challenges of transition governments to the difficulties of interethnic reconciliation.

One factor, however, has received but scant attention: the role of Islamism, the political ideology based on a religion that motivates the Muslim Brotherhood, al-Qaeda, and many other radical groups. This monograph will examine the impact of Islamism on Bosnian security, tracing developments during the 9 years of NATO peacekeeping, as well as the ensuing years. It will also examine the ties between so-called “nonviolent” and “violent” Islamism—ties that have already surfaced in other countries where NATO or the U.S. military is engaged. As a consequence, the monograph offers a framework to analyze the potential constraints that Islamism can place on present-day and future military missions in Muslim countries.

Bosnia-Herzegovina, once thought to be on the way to joining the North Atlantic Treaty Organization (NATO) and the European Union (EU), is instead falling behind, mired in political bickering, economic stalemate, and governmental dysfunction. In this difficult situation, Islamism poses a significant threat to Bosnia’s fragile domestic stability. Although the levels of Islamist terrorism and separatist movements are comparable to those elsewhere in Europe, they are particularly troublesome in Bosnia for two reasons. First, senior political and religious Bosniak (Muslim) leaders have long-standing ties to the Muslim Brotherhood and Islamist terrorism, including al-Qaeda and Iran, that they are very reluctant to abandon. Second, Islamism contributes significantly to Bosnia’s dysfunction as a country. Calls to re-impose traditional Islamic law, or sharia, arouse opposition from Bosnian Serbs and Croats, as does the nostalgia for the Ottoman Empire and Islamic Caliphate shared by key Bosniak leaders, the Organization of Islamic Cooperation (OIC), and the Turkish government.

Some analysts think that Bosnia’s slide can be reversed by mounting another NATO military mission, while others want the United States to accelerate its NATO membership. The U.S. Army should be prepared to explain why the previous NATO mission was successful, and why, in contrast, another one would be much more difficult. The European Command and the Office of the Secretary of Defense should alert Washington policymakers to the danger to NATO policymaking and day-to-day operations arising from the Islamist ties of some Bosniak leaders and representatives.

* The full publication is available here.

** Leslie S. Lebl is a Fellow of the American Center for Democracy and a Principal of Lebl Associates. A former Foreign Service Officer, she now writes, lectures, and consults on political and security matters. During her Foreign Service career, Ms. Lebl served as Political Advisor to the Commander of Stabilization Forces (SFOR) in Bosnia-Herzegovina in the late- 1990s, first in the American sector in Tuzla and then at SFOR headquarters in Sarajevo. Her most recent publications include articles in Orbis on the European Union, the Muslim Brotherhood, and the Organization of Islamic Cooperation, and on radical Islam in Europe. A monograph, Advancing U.S. Interests with the European Union, was published by the Atlantic Council of the United States. Other publications include analyses of European defense policy for the Cato Institute and of U.S.-EU cooperation in combating terrorism for Policy Review. Ms. Lebl holds a B.A. in history from Swarthmore College and an M.A. in foreign affairs from the Johns Hopkins School of Advanced International Studies.