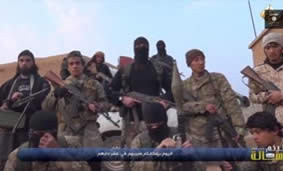 Left: From ISIS video: A French-speaking masked man in the center, flanked by other ISIS operatives

Social media continues to serve ISIS propaganda campaign and efforts to recruit in the West, especially among America’s black, using Ferguson’s and New York demonstrations  against the police. “Hey blacks, ISIS will save you,” #IslamicState, #Ferguson and #Coming, said recent tweet. Another carried the message, “Indeed, Malcolm X knew that the only cure for racism is Islam. Obama is proof that democracy won’t help blacks in USA. #Ferguson #ISISHERO— Abu Ottoman (@RadioRome) August 19, 2014.

Some are more instructive, “For how long will you let these govts oppress u. Draw ur knives and show them a response!! #FergusonDecision #IS,” twitted ISIS member, Abu Dujana, who also tweeted a photograph of a large knife held by somebody wearing a Nike glove.

Videos posted online also instructed, “If you can kill a disbelieving American or European, especially the spiteful and filthy French, or an Australian, or a Canadian, or any other disbeliever, then rely upon Allah and kill him in any manner or way however it may be.”

Last week, “An 18-year-old British citizen, apparently from London, known as Umm Khattab, the widow of an ISIS operative who fought in Syria, posted a photo on Twitter of a young boy armed with a toy gun standing in front of an ISIS flag with the inscription “the next generation”. ISIS and its supporters around the world publish photos of children carrying weapons against the background of ISIS flags, to emphasize their determination to fight and their patience.”

While Western authorities are worried about returning ISIS foreign fighters from Iraq and Syria, they should pay more attention to the  growing number of supporter they recruit in the West  through their savvy use of social media.

Recent expressions of support and sympathy to ISIS in the West were reported on Spotlight on Global Jihad (Dec.17-23, 2014), the Meir Amit Intelligence and Terrorism Information Center

The attack in Australia – additional information

Chinese separatists in the ranks of ISIS