Is a “Tehran Moment” in Obama’s Future? 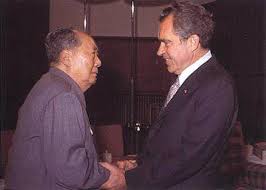 If it were not for Iran’s former president Mahmoud Ahmadinejad and the Mullahs, Obama would have probably made a deal with Iran a long time ago. Now it seems that Washington’s acceptance of Russia’s scheme to dispose of Syria’s chemical weapons is part of Obama plan for a grand rapprochement with Iran.

The September 9 disclosure by Iran’s Foreign Minister Mohammad Javad Zarif that Washington has been in direct communications with Tehran and the Treasury Department’s Office of Foreign Assets Control (OFAC) announcementregarding “[t]his administration’s commitment to reinforcing ties between the Iranian and American people” were the prelude for Obama’s September 14 confirmation that he had “exchanged letters with new Iranian President Hassan Rohani.”

This exchange is just the latest in Obama’s attempts to befriend the regime. Soon after he settled in at the White House, Obama, in an unprecedented video appeal to the Iranian people on Nowruz (the Iranian new year, March 20, 2009), proposed to end the decades-long animosity between the U.S. and Iran and offered a “new beginning.” Obama saidhe wanted to “speak directly to the people and leaders of the Islamic Republic of to make clear his desire to establish constructive ties” between the two countries.

But Ali Khamenei was not impressed. Nonetheless, advised byTrita Parsi (president of the National Iranian American Council), Obama waited ten days before condemning the violent crackdown of the regime on the June 2009 election protestors.

Obama continued to issue “warnings” to Iran, but has not done much to stop its nuclear enrichment program.  The sanctions on Iran have hurt the Iranian economy. But the sanction regime and enforcement mechanism have had more holes than an Emmentaler Swiss cheese–holes and exemptions that have allowed Iran to continue to trade and export its oil. The revenues from these activities sufficed not only to pay for the nuclear program, but also to overcome a few cyber-hacking (Stuxnet) setbacks.

Ali Khamenei’s choice in Hassan Rowhani as successor to Ahmadinejad proves that he “gets” Obama.

Electing the Western-educated, scholarly looking, seasoned nuclear negotiator Rowhani as Iran’s new “moderate” president was a good move. Rowhani is as committed to Iran’s nuclear program as his predecessor. But this allegedly “moderate reformer” is better at delivering double-speak messages to further the Iranian deception.

Yesterday, Rowhani in a televised speech stated that Iran would support whomever the Syrian people elect as president, even if it is not Bashar Assad. This “democratic” sounding statement surely fell on Obama’s attentive ears. All the while, Iranian Revolutionary Guards have been fighting alongside the Assad government against the rebels. An inconvenient fact that the U.S. chooses to ignore, as it also refrains from protesting Iran’s extensive training and sending of Shiites from and all over the world to fight alongside Bashar’s forces in Syria.

Rowhani’s appointment of mostly Western-educated former diplomats and bureaucrats to his government succeeded in creating the impression that Iran is becoming more moderate and is ready to renew the process of talks with West.

“Process” is the key word. The process that goes on in perpetuity achieves the following: The Iranians agree to talk but demand concessions to come to the table. When they get them, they join the talks only to obtain more concessions, but always walk away from the table because their demands were not met. All the while the clock on their nuclear weapons program keeps on ticking along nicely.

In advance of Rowhani’s visit to New York on September 26 to attend the U.N. General Assembly, OFAC declared last week that it had lifted sanctions on Iran to allow for a “broader range of activities by non-government organizations, to expedite the provision of health services, disaster relief,wildlife conservation [emphasis added] and human rights projects in the country.” OFAC also lifted sanctions on “imports and exports of services related to professional and amateur sporting activities” between the U.S. and Iran. Who knows? Perhaps this assitance would persuade Revolutionary Guard members to leave their uniforms behind to join Iran’s shooting team for the 2014 Sochi Winter Olympics. What we know, however, is that the money spigot from the U.S. can now directly help Iran to complete is nuclear program.

But why would Obama help Iran? After all, nuclear Iran presents a real danger to the U.S., not only to Israel and Saudi Arabia.

If Obama’s “me first” leadership style is any indication, it would not be unreasonable to assume that in return for his gestutres to Iran, he would ask Rowhani to reciprocate with an invitation to visit Tehran. This, as Obama’s logic seems to go, would ensure that that visit to Iran will reserve his place in history next to Nixon’s visit to China. And if Iran decides to use its nuclear weapons, hopefully that deluge would happen après Obama.