Iraq’s Theater of the Absurd* 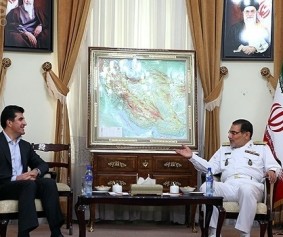 After wasting so many lives and so much treasure, the US may now have to cosy up to Iran to save Iraq.

Everyone in the ongoing Iraq tragedy has boxed himself in.

The Iraqi government of al-Maliki invited disaster by refusing to sign a status of forces agreement with the US and running Iraq as a private fief of the Sh’ia majority, systematically sidelining the Kurds and Sunnis. To compound the damage, Maliki is now creating hundreds of armed gangs of young men with no training or discipline but well-armed. Chaos impends

From the beginning, the US government mishandled the unnecessary invasion and its aftermath almost completely. A trillion dollars and thousands of lives later Iraq is a failed state.

Iran now has to intervene directly, and is already doing so with troops in Iraqi uniforms and the commander of the Quds Force in Baghdad advising the government. It cannot stand by and witness a Sunni takeover in Baghdad.

ISIL, the Sunni, terrorist army is in the process of overreaching. Instead of consolidating its hold over western and northern Iraq, it is pushing forward into the Sh’ia heartland. This will not be successful and may well lead to a disastrous defeat

Given all the above, the following tentative conclusions can be reached:

(1) The only group or country that will come out of this well is Iraqi Kurdistan, which now has full control of Kirkuk and its oil. The Kurdish army (Pesh-Merga) is fully capable of holding its own against ISIL and against the Iraqi government. The only defeat ISIL has sustained so far was against the Syrian Kurdish fighters. A declaration of full independence by the Iraqi Kurds is likely soon.

(2) It is quite possible, though absurd, that the US and Iran will cooperate in trying to shore up the Maliki government. Thus the US would be in informal alliance with a country it has declared to be a state sponsor of terrorism, supporting a government avowedly hostile. This is true theater of the absurd.

(3) Any substantial Iranian incursion into Iraq would have to pass through either Sunni Azeri territory or Iranian Kurdish territory. There is a possibility that outside forces might try to take advantage of that geographic situation to promote ethno-religious violence against the Tehran theocrats. More chaos would ensue.

This play is far from over. Turkey, Saudi Arabia and the Gulf states, particularly Kuwait, may very well be sucked in in one way or another. Hopefully, Israel will be able to observe events from the sidelines, while having to pay higher prices for the crude oil it imports due to the unrest.

This column was originally published in Globes.

“The current crisis in Iraq is the result of the meddling and collaboration of the western and regional enemies of the Iraqi nation, who are seeking to prevent the Iraqi people’s will and determination from coming into action,” Shamkhani said during the meeting in Tehran on Monday.

He called on Iraqi Kurds, Shiites and Sunnis to become united and defend their country to restore peace, tranquility and security to their country and ward off the danger of terrorism and its spread to the region.

Barzani, for his part, elaborated on the situation in Iraq after the start of the ongoing bloodshed by the terrorists of the Islamic State of Iraq and the Levant (ISIL), and said the Iraqi Kurdistan region will use all its capacities to maintain Iraq’s integrity and solidarity and won’t allow inhumane actions of the terrorists to affect the country’s unity and solidarity.

Barzani arrived in Iran a few hours ago to meet senior Iranian security officials on ways of ending the ongoing bloodshed in his country.

“Iraq enjoys the necessary potential and military preparedness to fight against the terrorist and extremist elements,” she said.

The Iranian foreign ministry spokeswoman also dismissed reports about the deployment of Iranian forces in Iraq, and said, “Any move that complicates the situation in Iraq will not be in the interest of Iraq and the region.”

She also stressed that the Iraqi people and government from all political and religious groups will stand in a unified front to confront the violent, extremist and terrorist elements.

“We believe that the Baghdad government can fully overcome the ongoing crisis in Iraq and thwart conspiracies through consolidation of national unity and internal solidarity,” Afkham added.