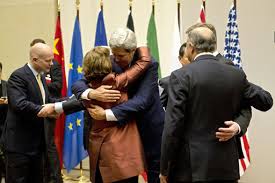 The speed at which the United States, Britain, France, Germany, China, and Russia are advancing Iran’s nuclear ambitions is mind-boggling. Even before the ink dried on the P5+1’s six-month Geneva accord with Iran — aptly described as  “just an appetizer” by former chief UN nuclear inspector Herman Nackaerts — we hear that talks on the final agreement will start shortly after the interim agreement begins on January 20.

This is especially alarming since the Geneva agreement did not demand that Iran stops all of its uranium enrichment programs and nuclear weapons research, in return for the West’s lifting some sanctions. Iran has never allowed U.N. inspection of all its nuclear sites and repeatedly stated it will not allow this now.

The current agreement doesn’t request, for example, inspection of Parchin military base, which has not been inspected since 2005, “despite calls by Yukiyo Amano, head of IAEA.”

Moreover, satellite imagery from August 2013, showing “ongoing construction and testing … [and] major alterations at the site which the Institute for Science and International Security (ISIS) says were meant to hide possible tests of conventional triggers for a nuclear explosion.” These images followed satellite images from August 2012 “showing cleanup activities [and] … suspicious activities at a building suspected of housing nuclear blast experiments.”

Back in December, we learned that the IAEA was by no means ready to inspect Iranian sites.  This appeared to be a problem that would take some considerable time to remedy.  But the Obama administration has not dealt either with this potentially deal-breaking fact or with other conditions Iran refuses to implement. It’s been busy congratulating itself on its diplomatic efforts while pressuring Congress to prevent the passage of new additional sanctions that would take effect if Iran fails to comply with any of the accord’s requirements during the next six months.

Meanwhile Rouhani et al., have announced that the Arak reactor would surely be built in due course (along with myriad new reactors around the country) and that the country would be upgrading the efficiency of its centrifuges no matter what. The Majlis (parliament) has a bill under consideration to enrich uranium to 60 percent purity whenever the negotiations don’t go Teheran’s way. That, as we have witnessed in the past, allows Iran to blackmail the U.S. and other Western nations to more concessions that harm their own national interests.

Rightly anticipating the end of all sanctions, the Iranians have been meeting steadily with potential European investors over the past two months.  The climate of this is fully expressed in a recent Der Spiegel article on just how busy the head of the German-Iranian Chamber of Industry and Commerce in Tehran has been. It’s not entitled “Chance of a Century” for nothing. Other Europeans agree. They, as did the Iranians, understood last November that the U.S. and UN sanctions regimes ended with the Geneva accord. The U.S. has tried to pretend that it is still seriously enforcing them, but our feckless allies clearly got the assurances that this is just window dressing to help Obama keep Congress in line.

The Western media mostly downplays the above, most likely because the Obama administration and other Western leaders have so little (if anything at all) to say about them. Story after story, however, regards whether the West is treating Iran with proper respect and well enough for the Geneva Agreement to work out. This began almost immediately after the agreement was inked. Opinion pieces were dominated by accusations against Congress for daring to prepare new sanctions if the agreement failed to work out after six months.  On December 7, Iranian Foreign Minister Javad Zarif warned, “If Congress adopts sanctions … The entire deal is dead. We do not like to negotiate under duress.” Pundits wondered if the Obama administration would be able to talk Congress out of such irresponsible actions while such “sensitive” negotiations were ongoing.  Some media outlets even compared the U.S. Congress to Iran’s Revolutionary Guard as irresponsible “conservative” opponents to the deal.

Iran is clearly in the driver’s seat not only regarding the lifting of sanctions but seems to be effectively calling the policy shots for the U.S. and the rest of the P5+1.  It’s no accident at all, then, that it was Tehran that first announced the January 20 commencement date for the agreement.

Accommodating Iran to the fullest extent possible is now the mantra of Western governments.  If you are not convinced of this, take a look at the January 8 issue of the New York Times for the article “U.S. and Iran Face Common Enemies in Mideast Strife.”  Although ostensibly on the simple fact that both the U.S. and Iran are supporting the Maliki government’s struggle against al Qaeda in Iraq’s Anbar Province, the Obama-worshipping NYT carefully explains-just as Khamenei and Rouhani would-that the real danger in the Middle East is Sunni jihadis and their supporters (and, by implication, not poor innocent Iran itself). Is the Times trying out a new explanation for the administration on why Iran should be accommodated? Stay tuned.

None of this would have happened has Obama insisted on ending uranium enrichment as a condition to lift any of the sanctions.  The question remains whether this was simply a witless act of appeasement that is an integral part of the president’s “multipolar world” and “we should negotiate with our enemies and discipline our friends” fantasies, or a deliberate betrayal of longstanding U.S. policies and our Middle East allies, especially Israel, which Iran says would be the first target of their nuclear weapons. It certainly serves to advance Obama’s quest of U.S. withdrawal from the world.

To date, the U.S. has given Iran the rope with which to hang the West and its allies. Finalizing any sanction relief agreement with Iran in February, without even an apparent demand to curb the regime’s nuclear weaponization programs, would amount to the U.S. springing the gallows trap on itself and its purported allies.