Iran Threatens Reprisals Against the U.S. 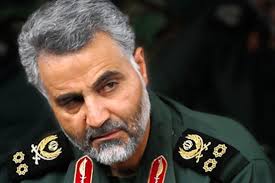 There seems to be no end to Western self-delusion when it comes to Iran. On September 4, President Hassan Rowhani allegedly sent Rosh Hashanna greetings to “all Jews, particularly Iranian Jews,” on a defunct Twitter account. Shortly after, this was officially denied. However, Deputy National Security Adviser Tony Blinken told NBC chief foreign affairs correspondent Andrea Mitchell, “The message is welcome. The tone is welcome.” Blinken added, “But what counts are deeds more than words.” Apparently, he hasn’t seen the clear evidence of Iran’s race to realize its nuclear weapons program, and hasn’t heard the repeated statements by Rowhani about Iran’s right to do whatever it wants. The scholarly looking, sophisticated Rowhani was “elected” president to help Iran buy more time to complete its nuclear plans and to help lift the sanctions.  The Rosh Hashana greeting flip-flop has served to perpetrate the illusion  of Rowhani’s moderation and willingness to deal with the U.S. on nukes, and other “reformist” intentions.

Iran hasn’t hesitated to threaten global reprisal against American interests, in reaction to President Obama’s ‘threats’ of “limited attack” on Syria. The U.S. has intercepted an order from Iran to militants in Iraq to attack the U.S. embassy and other American interests in Baghdad in the event of a strike on Syria. U.S. sources purport that the message came from Qasem Soleimani, the head of the Qods Force, and went to Shiite militia groups in Iraq. What makes this credible is the U.S. order that nonessential diplomatic personnel leave Lebanon. The administration has also made it known that “The U.S. military has also readied Marines and other assets to aid evacuation of diplomatic compounds if needed, and the State Department began making preparations last week for potential retaliation against U.S. embassies and other interests in the Middle East and North Africa.”

As with Rowhani’s greeting to the Israelis, the Iranians deny that Soleimani said any such thing. Alireza Miryousefi, a spokesman for Iran’s United Nations mission, said the allegation was baseless and meant to “provoke the Congress” into authorizing a strike on Syria.

Iranian threats of “terrorist” reprisals cannot be taken lightly. while they are meant to scare the West, they are also intended to inspire Tehran’s and Hezbollah’s “home grown” supporters in the Middle East, Africa, North and South America to terrorist actions, if Obama carries out his “limited attack” on Syria. Reza Kahlili describes the full extent of the vileness being peddled to the faithful.

As Congress debates whether to support President Obama’s call for a limited strike against Syria for the alleged use of chemical weapons, Iran is vowing to back Bashar al-Assad’s regime to the hilt and threatening to unleash terrorism should the U.S. strike.

Qassem Soleimani, the head of Iran’s Quds Forces, Wednesday told the Assembly of Experts–the body that chooses the supreme leader–that “[w]e will support Syria to the end.”

And in an unprecedented statement, a former Iranian official has warned of mass abductions and brutal killings of American citizens around the world and the rape and killing of one of Obama’s daughters should the United States attack Syria.

Alireza Forghani, the former governor of southern Iran’s Kish Province, threw down the gauntlet last week. Forghani is an analyst and strategy specialist in the supreme leader’s camp and closely aligned with Mehdi Taeb, who heads the regime’s Ammar Strategic Base, a radical think thank, and thus speaks with the blessing of the Islamic regime.

“Hopefully Obama will be pigheaded enough to attack Syria, and then we will see the … loss of U.S. interests [through terrorist attacks],” he threatened. “In just 21 hours [after the attack on Syria], a family member of every U.S. minister [department secretary], U.S. ambassadors, U.S. military commanders around the world will be abducted. And then 18 hours later, videos of their amputation will be spread [around the world].”

A similar act was committed in a video of the torture of William Buckley, a CIA station chief who was abducted in Beirut in 1984 and later killed by Hezbollah on Iran’s order. That video was dropped off at the U.S. Embassy in Athens. Former CIA Director William Casey later described what he saw in the video: “They had done more than ruin his body. His eyes made it clear his mind had been played with. It was horrific, medieval and barbarous.”

In addition, Forghani warned, “We should remind Obama that if you are a bastard, there are other bastards all around the world who can assault Sasha.” The statement is written in both English and Farsi, but in the Farsi version, Forghani clearly stated that Sasha will be raped by someone who has been able to get close to the Obama family.

“Obama will attack Syria and then you’ll go to hell, and the world’s public opinion will accept that you deserve to be attacked and assaulted, so please attack,” Forghani concluded.

Forghani, though not holding an official position within the regime but in a country that tightly censures the media, has stated his radical positions in articles that have been run by the majority of the regime’s media and has written several commentaries on the need for the destruction of Israel. One such article described the need for the Islamic Republic to have nuclear weapons and in another he laid out the legal case for the annihilation of Israel and all Jewish people. The latter, which ran in all of the regime’s media outlets, called for a pre-emptive strike on Israel. Based on this pre-emptive doctrine, he suggested, several “ground zero” points of Israel must be destroyed and its people annihilated.

Forghani cited the last census by the Israel Central Bureau of Statistics that shows Israel has a population of 7.5 million citizens of which a majority, 5.7 million, are Jewish. The census breaks down the districts with the highest concentration of Jewish people, indicating that three cities, Tel Aviv, Jerusalem and Haifa, contain over 60 percent of the Jewish population. Forghani wrote that Iran could target the three with its Shahab 3 ballistic missiles, killing all of its inhabitants.

Forghani’s threats last Wednesday were further emphasized by the chief commander of Iran’s Revolutionary Guards, Mohammad Ali Jafari, who on the same day told the regime’s Fars News Agency that “America’s vision in its ability for a limited strike in Syria is an illusion. The reactions will be beyond Syria’s borders … [and] those who participate with America in this matter will soon witness threats on their national security.”

Taeb, the head of the Ammar Strategic Base, had previously stated that, “Syria is the 35th province [of Iran] and a strategic province for us … if we lose Syria, we won’t be able to hold Tehran.”

Regime officials, including Ayatollah Ali Khamenei, have made it clear on many occasions that Assad’s regime is their red line and that any attack on Syria will have grave consequences for Israel and America.

Obama has stated that he is determined to punish Assad for the alleged recent chemical attack on his own people that killed more than 1,400 civilians, hundreds of them children.

*Reza Kahlili is a pseudonym for a former CIA operative in Iran’s Revolutionary Guard and author of the award-winning book “A Time to Betray” (Simon & Schuster, 2010). He serves on the Task Force on National and Homeland Security and the advisory board of the Foundation for Democracy in Iran (FDI).