Iran Inflates Its Involvement In Iraq* 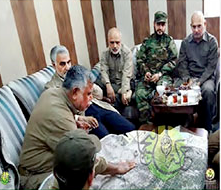 Left: Qasem Soleimani, second from left, in the operations room of the Shi’ite militias engaged in fighting alongside the Iraqi army[1] to take control of Fallujah (Qasemsoliemani.ir, May 23, 2016)

On May 22, 2016, Iraqi Prime Minister Haydar al-Abadi announced the beginning of a campaign to liberate the city of Fallujah from ISIS. Fallujah, located about 40 miles ( less than 60 km) west of Baghdad, is the most important stronghold still held by ISIS in the Sunni Anbar Province (western Iraq). The intense fighting to retake the city, where more than 50,000 civilians are held hostage by ISIS, is being carried out by Iraqi security forces with local Shi’ite and Sunni militias, and with American support.

Since the beginning of the Fallujah campaign reports published by the Iranian media have emphasized the role of Iran and Iraqi Shi’ite militias operating under Iranian direction in the fighting. According to the reports, Qasem Soleimani, commander of the IRGC’s Qods Force plays a central role in fighting on the ground.

While the Iraqi Shi’ite militias are taking part in the Fallujah campaign, their and Soleimani’s role have been limited to besieging the city.  The Iraqi regime keeps the Shiite militias from entering Fallujah out of fear they might retaliate against the city’s Sunni population. This would lead to deepening the Sunni-Shi’ite schism and would interfere with the continuation of the fight against ISIS.

This is not the first time that there have been differences between the actual involvement of Iran and the Shi’ite militias in the fighting and exaggerated reports in the Iranian media. After the liberation of Ramadi (the capital of Anbar Province) in December 2015, the Iranian media gave prominence to the involvement of the Islamic Revolutionary Guards Corps (IRGC) and Shi’ite militia forces in the fighting, even though their role in taking control of the city was marginal. After the liberation of Ramadi, the Iranian-backed Shi’ite militias attempted to ensure their inclusion in the campaign against ISIS. However, the central government in Baghdad opted to continue relying on American support and non-Shi’ite forces.

In recent months, there has been an increase in internal Iraqi criticism of Iran’s involvement, because Iran encourages the sectarian schism between Shi’ites and Sunnis and meddles in Iraq’s internal affairs. Criticism reached new heights during the political crisis of April 2016 between Prime Minister Al-Abadi and the Iraqi parliament over the prime minister’s proposed reform program. During the temporary takeover of the Iraqi parliament building by supporters of Muqtada al-Sadr, a Shi’ite cleric with political clout, Iraqi demonstrators shouted extreme anti-Iranian slogans and protested Iran’s meddling in their country’s politics.

The limited involvement of Iran and the Shi’ite militias in the fighting in Fallujah is also the result of the decline of Iraq’s strategic importance to Iran and the subsequent downgrading of Iraq as an Iranian priority over the past year. A weaker ISIS in Iraq diminishes its threat to Iran. But in Syria Iran has been forced to cope with the continuing predicament of the Assad regime, and the addition of Russian involvement in the fighting. Thus, Iran has become more attentive to Syria than Iraq. Despite the achievements of the Assad regime’s supporters in recent months, the war in Syria continues and Iran and the IRGC are still faced with a significant challenge.

But despite the constraints and difficulties, Iran is still determined to position itself as a central factor in the continuing fighting against ISIS in Syria and Iraq. The involvement of the IRGC and the personal involvement of Qasem Soleimani in the Fallujah campaign are intended to signal Iran’s important role in Iraq. Also, by claiming a bigger role in the Fallujah fighting, Tehran wants to enhance its influence in the Middle East. With Qasem Soleimani as a symbol of Iran’s regional power,  the Iranians have also a vested interest in glorifying him both at home and abroad, even when the degree of his actual involvement in conducting the war in Iraq has significantly decreased.

Regarding Iraqi politics, the Iranian attempt to magnify the role of the Shi’ite militias, even if their role is marginal, increases both the sectarian schism and Sunni alienation towards the central government and makes it difficult to proceed with the campaign against ISIS. It also magnifies the concerns of the Iraqi administration and the local Shi’ites regarding Iran’s influence on Iraq’s internal affairs. That could be seen in the reactions of both Sunni and Shi’ite Iraqi politicians to Qasem Soleimani visit to Fallujah.[2] The reactions came at a time when Sunni support for the Iraqi regime was considered of paramount importance, especially with the upswing of the campaign to rid Anbar Province of ISIS operatives, and later to liberate the ISIS stronghold in Mosul.

[1]Al-hashd al-shaabi (“the popular mobilization forces”), an umbrella organization of Shi’ite militias supported by Iran.
[2]Three Sunni Iraqi lawmakers who related to Qasem Soleimani’s visit to Fallujah claimed it could fuel sectarian tension and cast doubt on Baghdad’s assertions that the offensive was an Iraqi-led effort to defeat ISIS (Reuters, May 28, 2016). However, the deputy chairman of the popular mobilization forces (the Shi’ite militias operated by Iran) told the Al-Sumaria News network that Iranian advisors had been fighting alongside popular mobilization forces since the beginning of the struggle and that Soleimani was [in Fallujah] at the request of the Iraqi government and with the authorization of the Iraqi chief of staff (ISNA, May 29, 2016).
* A version of this analysis was published in Hebrew by the ITIC on May 30, 2016