Iran Flexes Muscles in the Gulf 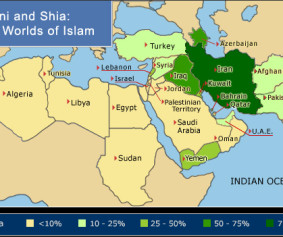 For the first time, the Iranians are attacking not just the Saudi government, but also the Wahhabi extremist Sunni sect that is the ideological underpinning of the Saudi regime. Wahhabis have been declared to be “worse than Jews” and heretical. “If they refuse to convert (to Shi’ism) killing them is not a sin.”

Of course, to Shi’as, all Sunnis are heretical, as they in turn are considered heretical by the Sunnis, but until recently the ayatollahs have been cooperating with Sunni governments and terrorist organizations such as Hamas and Islamic Jihad to confront the Israelis and the West. This tactic is apparently now ending, as the Iranians feel themselves capable of confronting their Sunni rivals as well as secular regimes and Western governments, given what they see (and proclaim) as their “victories” in the negotiations with the six powers.

They are also engaged in a charm offensive vis-à-vis the Gulf states, and have apparently achieved some success with Kuwait and Oman. The other Gulf emirates may also decide that they need to protect their eastern flank, given their perception that they have been abandoned by the US and that Iran is now certain to develop a nuclear weapon capacity, while the Tehran regime has shored up its internal position as a result of the partial lifting of sanctions and the widespread perception that all sanctions are crumbling and will not be able to be re-imposed, whatever happens in future negotiations.

To be watched for are signs of further unrest in the Saudi eastern province on the Gulf, which is majority Sh’ia. The bulk of Saudi oil is produced there, and any sabotage of the production facilities would do great damage to the Saudi economy. Now that Iran is again increasing oil exports with the collapse of the sanctions regime, the benefits to Iran could be immense if it were seen as a more reliable supplier of crude.

The Saudis are responding by deploying their financial resources: financing the Egyptian purchase of Russian defense equipment; providing further support to the Sunni rebels in Syria; and donating two billion dollars to the Lebanese army to enable it to better confront Hezbollah, Iran’s terrorist proxy.

For Israel, this development could be very significant, as contacts with the Saudis and the Gulf states have been proliferating recently. Right now, Iran has the upper hand, and the Persian theocrats have improved their domestic support thanks to their ability, under the terms of the agreement with the six, to import more foodstuffs and consumer items. The balance in the Gulf is shifting, and in a negative direction.

*Norman A. Bailey, Ph.D., is Adjunct Professor of Economic Statecraft at The Institute of World Politics, Washington, DC, and a researcher at the Center for National Security Studies, University of Haifa.