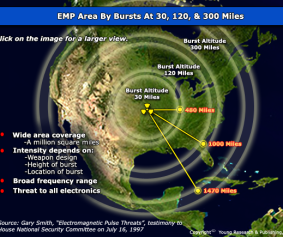 The United States’ electric power grid is more vulnerable today to Electro Magnetic Pulse effects, either by a sun-burst or a high altitude nuclear explosion, than it was five decades ago.

Yet, on January 21, 2014, responding to Fox News analyst Bret Baier’s inquiries, the Department of Defense stated:

“The Department is unaware of any increase in the threat of a deliberate destructive use of an EMP device. Further, any reporting to the contrary by those without access to current threat assessments is both reckless and irresponsible…”

The growing EMP threat seems to escape the Obama administration. However, back on September 16, 2002,Defense Secretary Don Rumsfeld warned: “countries have placed ballistic missiles in ships — cargo ships, commercial ships, dime a dozen — all over the world. Any given time, there’s any number off our coast, coming, going, on transporter-erector-launchers, and they simply erect it, fire off a ballistic missile, put it down, cover it up. Their radar signature’s not any different than other 50 others in close proximity.”

Washington denials aside, the Geneva Accord that went into effect on January 20th, has increased, not lessened, an Iranian EMP threat. Iranian Foreign Minister Mohammad Javad Zarif, insisted on CNN today “that the Obama administration mischaracterizes concessions” by his country “in the six-month nuclear deal with Iran.”

And Iran’s President Hassan Rouhani stated: “No Destruction of Centrifuges.” He repeatedly refused to accept any limitations on Iran’s research and development its nuclear technology. Instead, he announced that “in accordance with the parliament’s law, in the future, we’re going to need 20,000 mega watts of nuclear produced electricity and we’re determined to get it at the hands of our Iranian scientists.“

While the federal government is denying the threat, most of our satellites, as well as our civilian infrastructure remain exposed to an EMP threat. But several states have taken the initiative to improve the protection of their citizens.

The front page of the Honolulu Star-Bulletin on the day after a 1962 high altitude nuclear test 900 miles away, which caused damage in Hawaii, and a National Geographic magazine a couple of summers back, which highlighted EMP from Solar emissions.

We worked hard during the Cold War to harden our key military systems against EMP effects, but not our critical civil infrastructure-notably the electric power grid-and modern solid state electronics are much more vulnerable to EMP effects than they were in 1962. Unless these vulnerabilities are rectified, a single nuclear burst over the center of the nation could bring down the grid for an indefinite period and several hundred million Americans could die within a year. Solar storms can also bring down the currently unhardened grid with similar consequences-and a major solar storm will happen one day when the orbital mechanics associated with the Earth’s travel around the sun coincides with one of the regularly occurring massive solar emissions.  The only question is when?

[The] current main concern is that a nuclear armed Iran (see the chart below) could mate a nuclear weapon on one of its many ballistic missiles and launch it to produce the EMP of concern.  The good news is that the Pentagon, at Congress’ direction, is considering five possible locations for a ground-based ballistic missile defense (BMD) site-like those in Alaska and California-to defend the Eastern Seaboard against Iranian intercontinental ballistic missiles (ICBMs) that could carry a nuclear weapon over the North Pole to attack us.

The bad news is that such a site would not deal with Iran (or their terrorist surrogates) in launching ballistic missiles from off our coasts-particularly from the Gulf of Mexico, nor would it be effective in defending against nuclear weapons carried by Iranian satellites over the South Pole.  Iran and also its ally North Korea have launched satellites over the South Pole, so this threat is not hypothetical from a technological point of view.  In fact, the Soviets had such a system, called FOBS (for Fractional Orbital Bombardment System) in the 1960s. We also need to defend against these “attack from the south” or “back door” threatening scenarios.

A “quick fix” to this urgent need-and that South Carolina has an important role in addressing the need.  We can place key missile defense system components of the Aegis BMD ships on 2-4 military bases around the Gulf of Mexico as suggested by the stars in the chart below. A football field size area is needed-also with appropriate separation to assure public safety considerations. No R&D is required for such a deployment beyond working the public interface issues-which we at High Frontier have been doing, so far in Pascagoula, Mississippi where our Aegis ships are built and on Tyndall AFB in Panama City, Florida, home of the First Air Force (AFNorth), which is solely responsible for ensuring the air sovereignty and air defense of the Continental United States, U.S. Virgin Islands and Puerto Rico, as a direct l Guard, reporting through the SC Adjutant General to the Governor of South Carolina.  As elaborated in the linked briefing, the Army Major General Commander of the 263rd AAMDC is the Deputy Area Air Defense Commander for Continental NORAD Region, reporting to the Air Force Lieutenant General commanding AFNorth at Tyndall AFB. He also is a direct report to the Army Lieutenant General Commander of Fifth Army in Ft. Sam Houston, Texas, who is charged with protecting the American people and their way of life. Both of these 3-star commanders directly report to the 4-star Commander of Northern Command in Colorado Springs.

In addition to its well-known role in responding to disasters of all sorts, the SC National Guard also has a very important role to play in defending Americans against air and missile attack. All but a couple of the several hundred people present at the Convention did not know about the 263rd AAMDC in Anderson, let alone of its important mission. Even folks from Anderson were unaware of its presence or mission.  Consider the 6th chart of the linked briefing for more information.

During the coming months, I intend to work with the SC Adjutant General’s office and the men and women of the 263rd AAMDC to help them better understand the EMP issues and what can be done to prepare to help counter an EMP attack-or to deal with the consequences of  an EMP attack should the defenses fail, or in the case of a major solar emission.

We have already agreed to work toward a series of exercises this spring to build awareness among the Guard and others in SC who can play a critically important role in dealing with this existential threat to all we hold dear-hopefully leading to a major Vigilant Guard exercise in 2015. We anticipate reaching out to the private sector-local and state authorities who have potentially critical roles to play, as well as private citizens.  And we anticipate including the neighboring state citizens and authorities in seeking to assure a regional focus on this important problem. My bottom lines-in more detail that I had time to present- are summarized on the final chart of my briefing, below.

[It is importan[t] of working this problem from the bottom-up, and…the National Guard had a major opportunity to become the integrating agent between the local citizenry and the local, state and federal authorities in recognizing and dealing with this well-known (even to our enemies) threat.  Up to now, the Federal authorities seem to be ignorant or incompetent in developing the needed countermeasures.

As an example of this impedance, consider Bret Baier’s excellent January 21st Fox News Report, and the Department of Defense incredible response to inquiries regarding the threat-as noted above, ignorant at best in stating:

“The Department is unaware of any increase in the threat of a deliberate destructive use of an EMP device. Further, any reporting to the contrary by those without access to current threat assessments is both reckless and irresponsible.”…

The EMP Commission’s 2004 and 2008 reports on these matters. This congressionally mandated commission, made up of national experts on this subject, would certainly disagree with the DoD’s misinformed spokesperson.  Calling those warning the American people about this existential threat “reckless and irresponsible” is a clear example of an absurd charge that should be applied to those making such a charge themselves.

Indeed, the DoD has no excuse whatsoever for ignoring or misleading others about this threat-which the DoD has understood and responded to since the early 1960s-justifiably then as a highly classified matter.  But the EMP Commission went to great efforts to get much of that information into the open literature in its 2008 report-so there is no excuse for such ignorance and ambivalence.

Indeed, as one who oversaw many of these important programs and designing systems to protect against EMP, I say that those in the Defense Department suggesting there is nothing to worry about are “reckless and irresponsible” beyond measure!

Commissioners’ statements that first pointed out that Iran in the late 1990s conducted tests from vessels in the Caspian Sea that indicated an interest in detonating a payload at an altitude that could optimize EMP effects.  Then, here’s a quote from former Secretary of Defense Don Rumsfeld:

“Countries have placed ballistic missiles in ships – dime a dozen – all over the world.  At any given time, there’s any number off our coasts – coming, going.  On transporter-erector-launchers, they simply erect it, fire off a ballistic missile, put it down, cover it up.  Their radar signature’s not any different than 50 others in close proximity”

And I could go on, for example by quoting Jim Woolsey, a colleague and friend who was Bill Clinton’s CIA Director, was one of the EMP Commissioners and has spoken often about this important problem.

Importantly, he gave a very impressive account of the political and societal problems of hardening the electric power grid-including the reluctance of the electric power companies in hardening the grid-also reckless and irresponsible behavior. And this is related to the Congressional reluctance to take the initiatives to require that the grid be hardened-also reckless and irresponsible for those who are sworn to “provide for the national defense.”

In particular, without calling them out in particular, he explains why the House Energy and Commerce Committee blocked the Shield Act to direct that these matters be addressed in that past Congress-and why that is still the case in this Congress. ….  A lady from Michigan who knows Congressman Fred Upton, who chairs this important committee. She was notably outraged that he was blocking congressional action that has overwhelming bipartisan support  and promised to take this issue home and engage with Chairman Upton and his constituents to encourage him overcome his reluctance.

This could be enormously helpful.  And it illustrates how initiatives from the bottom-up could be very helpful to our cause.  Stand by.

A version of this articled appeared on the High Frontier website January 23, 2014.