If we must speak Gaelic, Amaideas!* 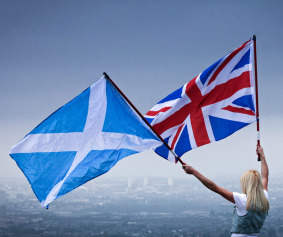 All the media hype to the contrary notwithstanding, the referendum on independence for Scotland was very close to a farce. Ironic, too, that such political balderdash should have taken place in the historic home of a half dozen of the world’s most noted political thinkers.

That it was media-driven was made even more apparent in the closing hours after the victory of commonsense took over. CNN, unfortunately that worldwide purveyor of stylish rubbish, set the tone. Amanpour, who never met a cliché she couldn’t misappropriate, led the pack in the little inquest, with talk of “the great democratic process”. That, of course, despite the fact that not a single of the extremely difficult problems which would surface with “independence” from currency to defense had been debated in any real sense. Then there was a spokesman for Facebook who nattered on for several minutes on how important the social media had been to “the process” without presenting one solitary fact. And bringing up the rear was a bimbo from a leftwing American think-tank – the Scots didn’t have enough muddlers on their own, apparently – who supposedly advised the Scottish demagogic leader, Alex Salmond, on economic issues. But, as with every major concern in the whole proposed process of leaving the United Kingdom, neither she nor he – an economist and onetime banker – gave a clue as to how a new impoverished mini-state would organize its finances or its currency.

From its origins in 2012 when U.K. Prime Minister David Cameron acquiesced to the referendum, blithely assuming there was no question of the overwhelming strength of “unionist” support, the referendum was treated cavalierly. Cameron had rejected, by the way, Salmond’s offer to put a third option on the ballot, the very one which Cameron and other U.K. leaders of all the major parties have now promised the Scots, that is, an expanded self-government. So much for the political perspicacity of the British Conservative Party leadership, which has little if any following among the Scots. [No one even mentions that the name “Cameron”, despite the PM’s very posh background, is of Scottish origin, widespread throughout “the Anglo-Saxon” world and typical of the many indivisible links that bind all the British isles’ peoples.]

Everything about the referendum – including permitting adolescents to vote – was inane considering the cataclysmic consequences a “yes” vote would have meant. Untying the centuries-old knot with London would have been a signal for the spread of so-called “nationalist” enterprises throughout Europe. The saw, once generally accepted, that the new European Union had loosened the old nation-state bonds throughout the Continent and therefore empowered regional “nationalisms” is now very much up for reevaluation given the splintering troubles in Brussels. Nor, for that matter, were the Scots to have been permitted to enter the EU would they have been likely to want to swap sterling, however battered still an independent and sometime reserve currency, for the foundering Euro.

Initially, at least, however a vote for independence would have refloated a half dozen regional agitations – from Catalonian and Basque old demands for separation from ”the Spains” to Bavarian exit from the German federation, to Corsican and Breton “independence” movements in France, to the claims of the Venetians, the South Tyroleans and Sardinians in Italy. Given the already strained environments in which all these countries find themselves it, a Scottish yes would have been a continent-wide disaster.

Strained, indeed. Glaswegians may have given the independence advocates its wholehearted support but there is little evidence they had any solutions to the joblessness created with the departure of what was once the world’s shipbuilding center on the Clydeside. Nor was there any solution evident about how to meet Scotland’s disproportionate “welfare” payments or the additional burden Salmond & Co. were promising to lay on the new independent state. The fact is that the nationalists were accompanied by remnants of every discredited leftwing movement of the Cold War, including unilateral disarmament. They might well have chosen words from the old Scottish ballad “I know where I am going”: “Some say he’s poor, But I say he’s bonnie, The fairest of them all, My handsome winsome Johnny” rather than “Scotts wha hae”.

In the cleanup, London will have to strive to come through on promises to extend still further local government prerogatives to the Scottish parliament. But that, too, was in the cards once Labor Prime Minister Tony Blair acceded to the whole concept of “devolution” and a regional legislature, in an effort to buy off his own Labor party’s following in Scotland and its representation at Westminster.

But the no vote gives the Brits an opportunity, which requires more than time but intense negotiation to turn their highly centralized government into one of federal units not only for the Scots, but also for the Welsh, the Northern Irish, and perhaps northern England. And now in the hysteria preceding the vote, the issue of an England-only representative body without the Scots voting on English laws has become an enhanced “issue”. That quirk in British representative government has long been obscured despite England’s overwhelming majority in the U.K. [totaling 63-million, with 84% in England and only a tenth of that in Scotland].

It’s an index to the mediocrity of British leadership that at a time of grave crisis to the whole of the democratic world, this kind of meaningless twaddle should have been entertained. Not that it does not have its replica in Britain’s democratic allies, including and especially in the U.S.

At a moment when the whole of Western civilization is beset with a dual crisis generated by a fragile but aggressive Russian dictatorship and the nihilistic onslaught of traditional Islamic fanaticism, leadership egged on by the media is largely obsessed with trivia. British constitutionalism is more than that, of course, but pretensions of Scottish exceptionalism don’t really count for much in the totality of things.

*A version of this column will be posted Monday, Sept. 22, 2014, on the website yeoldecrabb.com