Hezbollah’s Involvement in the Civil War in Syria 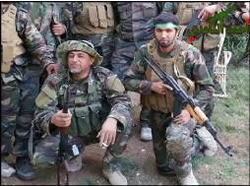 Left: Hezbollah operatives celebrate their victory after the takeover of the city of Yabrud (YouTube, March 16, 2014).

Hezbollah regards the takeover of Yabrud as a security and morale-boosting achievement, costing the organization relatively few losses

The Takeover of the City of Yabrud

1. On March 15 and 16, 2014, the Syrian army, with Hezbollah assistance, took over Yabrud, a city in the Qalamoun region near the main road leading from Damascus to Homs. According to Lebanese and Syrian media reports, Yabrud was conquered in a swift military move that took less than 48 hours. According to the media, before the takeover roads leading in were blocked, the hills overlooking the city were occupied and artillery was fired to weaken the rebels inside the city.

2. The Syrian army and Hezbollah’s rapid takeover of Yabrud caused some of the rebels to flee, reducing the number of casualties among the attacking force, and possibly contributing to lessening the physical destruction of the city. However, a senior source in the joint Syrian army-Hezbollah operations room reported that the Al-Nusra Front, a branch of Al-Qaeda and the most prominent organization among the rebel forces which defended the city, had lost hundreds of operatives in Yabrud as well as large quantities of military equipment (Al-Ra’i, Kuwait, March 17, 2014).

3. After the takeover of Yabrud the Syrian army, with Hezbollah support, began clearing the regions near the Syrian-Lebanese border. In our assessment the main military effort was directed at clearing rebel fighters from the cities, towns and villages lying between the Damascus-Yabrud road and the Syrian-Lebanese border (the media noted Ras al-Eyn, Al-Zabadani, Ranqus, Maaloula, Ras Maara and others). The military effort has not yet ended and battles with the rebels continue in the area (as of the beginning of April 2014). 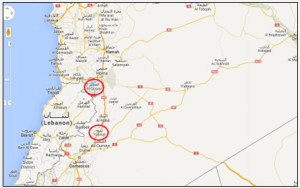 4. Hezbollah’s TV station reported that the Syrian army found a workshop in Yabrud where bobby-trapped cars were made and sent to Lebanon. A car was found in the workshop with Lebanese license plates and containing 200 kilos, or 440 pounds, of explosives. The car was supposed to be detonated by a suicide bomber (Al-Manar, March 18, 2014). The Lebanese TV station MTV reported that the Syrian army had found five car bombs in the workshop. In addition, the Syrian army is also operating in the region of Ras al-Eyn (southwest of Yabrud), where another workshop for making booby-trapped cars sent to Lebanon was found (Al-Manar, March 19, 2014). 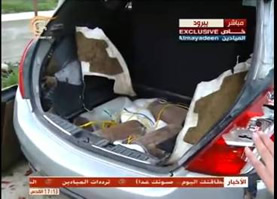 An Al-Mayadeen TV correspondent reports on the workshop for car bombs discovered in Yabrud, showing where in the car the explosives were hidden (Al-Mayadeen TV, Lebanon, March 18, 2014

The Significance for Hezbollah of the Takeover of Yabrud

5. The city of Yabrud and its environs were a main center for anti-Hezbollah attacks carried out by the organizations affiliated with Al-Qaeda and the global jihad, especially the Al-Nusra Front. Hezbollah repeatedly claimed that terrorist attacks were being planned in Yabrud, and from there operatives infiltrated into Lebanon through the Sunni Syrian city of Arsal in the northern Beqa’a Valley. In fact, at the end of 2013, when the campaign for the Qalamoun region began, there was a wave of attacks against Hezbollah led by the Al-Nusra Front, some involving suicide bombers who blew themselves up in car bombs. Most of the attacks centered on targets affiliated with Hezbollah and the Shi’ites in Lebanese, especially in the southern suburb of Beirut where Hezbollah has its headquarters.[1]

6. For that reason, Hezbollah considers the takeover of Yabrud as an important security and morale-boosting achievement. After the takeover a Lebanese newspaper correspondent reported that the Hezbollah leadership and the residents of the Shi’ite suburb of southern Beirut were extremely satisfied, because they hoped the takeover of Yabrud would release them from the nightmare of car bombs blown up by suicide bombers (The Daily Star, March 19, 2014). The feeling was described by Lebanese commentator Ibrahim al-Amin, who is close to Hezbollah, and who has often reported its positions. He said that “What happened in Yabrud will reduce the pressure on Damascus and the Syrian regime. It will [also] limit the capabilities of those who sponsor the suicide bombers who come to Lebanon. Slowly but surely it will lock Lebanon’s gates…” However, he said realistically, that “What happened yesterday [the takeover of Yabrud] will not slam the door on the confrontation and it will not permanently prevent suicide bombers from reaching their civilian targets in Lebanon…” (Al-Akhbar, March 17, 2014).

7. Hezbollah leader Hassan Nasrallah also spoke about the takeover of Yabrud and the campaign in the Qalamoun region in an interview with the Lebanese newspaper Al-Safir (April 7, 2014). He said:

1) Following the military action in Yabrud and the Al-Qalamoun region it could be said that the danger of attacks had been greatly reduced, because the Syrian forces exposed workshops for making car bombs, in both Yabrud and Ras al-Eyn. The security efforts of the Lebanese army and security forces also contributed [to reducing the danger]. “Generally speaking we can say the danger has been sharply reduced but we cannot say that it has completely disappeared. A great effort is required, both along the Syrian [-Lebanese] border and inside Lebanon.”

2) Hassan Nasrallah denied the Lebanese media reports of a “strangulation” of the southern suburb resulting from the security measures taken, and that it had led local residents to flee to other areas of Lebanon. He claimed that the attacks in the southern suburb had in fact increased support for Hezbollah’s military involvement in Syria, based on public opinion polls, information and research he had. Nasrallah claimed that the feeling of the general Lebanese public, not only the Shi’ites, was that Hezbollah’s involvement in Syria protected Lebanon from terrorist groups based in Syria. Moreover, he said, the Lebanese public even felt that Hezbollah’s military intervention in Syria should have come sooner.

3) As in the past, Nasrallah denied reports in the Arab media that Hezbollah had suffered many losses in the Qalamoun region [Hezbollah losses in Syria are a sensitive internal Lebanese issue]. Those reports, he claimed, were wishful thinking and not facts. For example, regarding the claim that Hezbollah had lost 500 operatives in Al-Qalamoun, he asked, “Is it possible to hide 500 shaheeds in a society like Lebanon’s? Not even one could be hidden, to say nothing of 500.”

8. From the Al-Safir interview it is clear that Hezbollah closely follows developments in Lebanese public opinion, both Shi’ite and non-Shi’ite, regarding sensitive and controversial issues, such as Hezbollah’s military involvement in Syria. To that end, according to Nasrallah, the organization is assisted by public opinion polls. He told Al-Safir that after the attacks in the southern suburb several people who could not decide where they stood on the issue of Hezbollah’s involvement in Syria, and even some of those who opposed, it had changed their minds. Nasrallah added that the [results of the] public opinion polls were supported by clandestine contacts Hezbollah had with political forces and religious and sectarian leaders in Lebanon. He said, “Some of them cannot not say in public what they say in private, fearing repercussions or negative consequences in the future, or lest their relations with other countries in the region or embassies in Lebanon suffer.”

9. In the takeover of Yabrud Hezbollah suffered far fewer losses than in the takeover of Al-Qusayr (June 2013). In our assessment the main reason was Hezbollah’s main role in the campaign for Al-Qusayr and its secondary role as an auxiliary force supporting the Syrian army in the battle for Yabrud (also the reason why, in our assessment, less military force was used at Yabrud than at Al-Qusayr). Another reason was the fierce resistance put up by the rebel forces at Al-Qusayr as opposed to the weak fighting in Yabrud, which made a swift takeover of the city possible (lasting only two days, March 15-16, 2014). In our assessment another reason was the military capability of the Hezbollah operatives, who accumulate considerable experience in urban warfare as the fighting in Syria continues, decreasing their losses.

10. Thus Hezbollah was able to rack up another achievement in its involvement in the civil war in Syria without suffering significant losses. According to an ITIC name count of Hezbollah operatives killed in Syria in March 2014, 28 operatives were killed, most of them in the campaign for Yabrud.[2] In comparison, 120 Hezbollah operatives died in the campaign for Al-Qusayr, most of them (114) in the two weeks of fighting inside the city, until it was conquered (June 5, 2013).[3]

11. Hezbollah’ death toll in the takeover of Yabrud and in the fighting in the Qalamoun region (which is still ongoing) raise the overall number of deaths of Hezbollah operatives during the Syrian civil war to 337. That is the number of names the ITIC has identified. There were several dozen additional deaths the ITIC did not identify or were not reported by Hezbollah in the media (for example, MIAs). Therefore, in our assessment the overall number of Hezbollah operatives who have died in Syria so far is about 360 (updated to April 1, 2014). 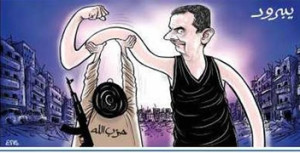 Hezbollah props up Bashar Assad after the battle in Yabrud (Al-Watan, Qatar, March 20, 2014)

[1]For further information see the February 11, 2014 bulletin “Using suicide bombers as weapons: The leading modus operandi in the Al-Nusra Front and Islamic State in Iraq and Greater Syria’s struggle against the Syrian regime in Lebanon.”
[2]An examination of the names of the 28 Hezbollah operatives killed in March showed that most of them (16) were killed in the battle for Yabrud. Another was killed in the fighting in the region of Al-Qalamoun. It was reported that ten others were “killed carrying out their duty of jihad” or “killed in the fighting in Syria.” It campaign be assumed that at least some of them were killed in the battle for Yabrud and/or battles in the Al-Qalamoun region. Only one death in March was explicitly reported as having occurred in the agricultural area around Damascus.
[3]For further information see the June 27, 2013 bulletin “Hezbollah Operatives Killed in Syria – Update.”