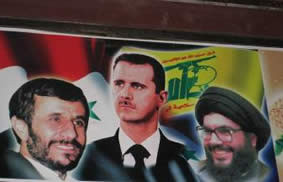 1. For Iran and Hezbollah, the preservation of Bashar Assad’s regime is of supreme strategic importance. Syria is Iran’s greatest “resistance camp” ally, providing it with a firm foothold in the heart of the Middle East, as well as political and military influence. Syria also plays a vital role in Hezbollah’s military buildup, helping it to build offensive and deterrent capabilities against Israel. For Iran and Hezbollah, the fall of the Syrian regime would be a disaster, it would weaken Iran’s regional position against the United States and Israel and damage Hezbollah’s military capabilities and political influence in Lebanon.

2. Iran and Hezbollah’s strategic interests are accompanied by religious-sectarian solidarity with Syria’s Shi’ite population (an estimated 400,000-450,000 strong) and also with the Alawite sect that rules Syria. That solidarity, which as been pronounced in Nasrallah’s recent speeches, has became stronger since the Syrian Shi’ites and their holy sites in Syria became targets for harassment by the rebels (particularly organizations affiliated with Al-Qaeda, such as the Al-Nusra Front, which considers Shi’ites as infidels).

3. With those dangers in mind, Iran and Hezbollah employ two parallel strategic tracks: the first, immediate track is intended to prop up the Syrian regime’s ability to survive and continue governing, with the aid of military, economic, political and propaganda support. The second track, planned as an intermediate- and long-term strategy, is intended to make it possible for the Shi’ites and Alawites to defend themselves by founding a “popular army.” In our assessment such a “popular army” is planned for an estimated 100,000-150,000 militiamen and give Iran and Hezbollah a foothold in the areas populated by Shi’ites and Alawites, making them important factors in the internal Syrian arena in the post-Bashar Assad era.

4. In addition to providing a response to the potential dangers, Hezbollah strives to acquire advanced military capabilities from the Syrian regime, the possession of which could deter Israel and challenge its technological superiority. Such advanced capabilities includeadvanced surface-to-surface missiles (such as the Iranian Fateh-110s), anti-ship cruise missiles (Russian Yakhonts), and anti-aircraft missiles (Russian SA-17s and other systems). Hezbollah also wants, in our assessment, to establish a foothold for terrorist attacks from the Golan Heights by exploiting the weakness and strategic distress of the Assad regime. Hezbollah’s desire for “game-changing” weapons and its willingness to “help” the so-called “Syrian popular resistance” in the Golan Heights were publicly stated in a speech given by Hassan Nasrallah on May 9, 2013. Israeli policy, as publicly stated byIsraeli Prime Minister Benyamin Netanyahu, was “to prevent, the transfer of advanced weapons to Hezbollah and to [other] terrorist elements.”[1]

5. The Iranian policies regarding the civil war in Syria are handled by the Qods Force(commanded by Qassem Suleimani), with Hezbollah as Iran’s main subcontractor. Hezbollah’s involvement in the Syrian civil war is expressed by their sending several thousand operatives to participate in the fighting in Shi’ite regions. Hezbollah also supports the Syrian regime in several other ways: training (its forces in guerilla warfare),intelligence, securing the Syrian-Lebanese border, taking preventive measures inside Lebanon and propaganda campaigns.

6. The operatives sent to Syria play an important role in the fighting, especially in locations where Hezbollah (and Iran) have sectarian-religious interests: the Al-Qusayr region, south of Homs, near the northern border with Lebanon where there is a Shi’ite population living within a Sunni area (the Syrian army, with Hezbollah support, is currently [beginning of June 2013] trying to complete its takeover of Al-Qusayr); and the grave of Al-Set Zaynab, located south of Damascus, an important holy site for Shi’ites and an important pilgrimage site.Hezbollah continues to be sucked further into the civil war in Syria despite its losses and the political price it is forced to pay: so far more than one hundred of its operatives have been killed (most of them in the campaign for Al-Qusayr) and criticism of Hezbollah has increased among its opponents in Lebanon and throughout the Arab world.

7. Hezbollah was involved in the first year of the civil war in Syria but was careful to keep a low profile. In 2012 it sent a limited number of its military operatives to Syria, mainly as advisors and for security missions. Hezbollah was actively drawn into the war (as opposed to Iran’s caution) during the first half of 2013. That was because both in Iranian and Hezbollah assessment, the survival of the Syrian regime was in jeopardy and that Shi’ite religious-sectarian interests were being threatened. However, despite its having fallen into the Syrian cauldron, Hezbollah’s direct involvement in the war is still relatively limited and its influence on overall events in Syria is secondary. In our assessment, however, its involvement may grow as the Syrian regime weakens and the dangers to Iran and Hezbollah’s strategic interests increase.

Contents of This Study

1. Iran and Hezbollah interests in Syria

2. Iranian support for the Syrian regime

3. Hezbollah support for the Syrian regime

2) Direct Hezbollah participation in the fighting

3) Other military fields of support

4. Plans for the morning after: Establishing Shi’ite and Alawite militias

2) The explosive zone: The grave of Zaynab, sacred to Shi’ites (south of Damascus)

6. The price Hezbollah pays for supporting the Syrian regime

7. Analysis of Hezbollah operatives killed in the fighting in Syria

8. Appendix: List and pictures of Hezbollah operatives killed in Syria

* Full document of this analysis is available in Hebrew in the Meir Amit website.

Syria: The Spanish Civil War All Over Again: Michael Ledeen

Hezbollah’s Safe European Home Funds Terror in the Middle East-and in Europe. Will the call to list the Lebanese group’s military wing as a terrorist organization in the European Union have any effect? Hanin Ghaddar and Ana Maria Luca