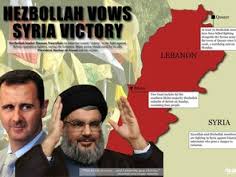 1.   In late 2013, Hezbollah had intensified its military involvement in the civil war in Syria, suffering heavy losses. The main three sites of Hezbollah fighting were the eastern rural area of Damascus (Al-Ghouta al-Sharqiyya), the Al-Qalamoun mountain range, north of Damascus, which runs along the Syrian-Lebanese border (the Homs – Damascus route), and the grave of Al-Set Zaynab, south of Damascus.

In these three sites, Hezbollah operates as an auxiliary force, aiding the Syrian army and the Syrian security forces, and not as a military unit with independent missions (as was the case in the Al-Qusayr campaign).This fighting was closely coordinated with the Syrian army:according to Kuwaiti newspaper Al-Rai (December 12, 2013), the Syrian army and Hezbollah maintain a joint operations room for managing the campaign. We estimate the number of Hezbollah operatives in the fighting at several thousand, an estimate similar to the scope of the Hezbollah force in the Al-Qusayr campaign (May 19 – June 5, 2013).

The goals of the campaign

3.   The military campaign waged by the Syrian army, with the assistance of Hezbollah, has several military and political goals:the first – to establish the regime’s control in the rural eastern part of Damascus (Al-Ghouta al-Sharqiyya); the second – to take over the Al-Qalamoun mountain range north of Damascus and cut off the rebel organizations in the north from their forces in the Damascus region and near the Syrian-Lebanese border. All this was done in order to address the rebels’ recent successes (i.e., taking over the large arsenals in Mahin, south of Aleppo[2]) and to position the Syrian regime in a better bargaining point prior to possible political moves (“Geneva 2”).Senior figures in the joint operations room of the Syrian army and Hezbollah forces told a reporter from Kuwaiti newspaper Al-Rai that “the campaign to strengthen [the hold of the Syrian regime in] Damascus and isolate [the rebel forces] in northern Syria from the south is underway in full swing and there is a possibility that it will expand prior to the Geneva 2 Conference on January 22 [2014].”

4.   Beyond the fundamental interest of Iran and Hezbollah to help promote the strategic goals of the Syrian regime, Hezbollah has two interests of its own, security and sectarian-religious.From a security aspect, Hezbollah seeks to gain control over the area bordering on the Syrian-Lebanese border (the Al-Qalamoun mountain range), out of which organizations affiliated with Al-Qaeda and the global jihad launch terrorist attacks against Hezbollah in Lebanon.[3]From a sectarian-religious aspect, Hezbollah is committed to continue defending the grave of Al-Set Zaynab, which is under constant attack by the rebels, who are aware of the site’s religious significance (Hezbollah suffered a large part of its losses in the compound of the grave). YouTube video of a military framework so-called the Golan Heights Martyrs Division, documenting an explosion at Hezbollah’s headquarters near the grave of Al-Set Zaynab (Farah News Online, October 28, 2013). In an interview with the Lebanese channel OTV (December 3, 2013), Hassan Nasrallah admitted that the building collapsed but claimed that no one was inside. Therefore, Nasrallah said that the allegation that Hezbollah suffered 25 casualties in the building is incorrect. A reporter from the Lebanese TV channel Al-Mayadeen, which is affiliated with Hezbollah, explains the importance of the campaign currently raging in the town of Yabrud. According to her, the route between Yabrud (Syria) and Arsal (Lebanon) is an important route for smuggling weapons and infiltrating into Syria. There is also a dominant presence of operatives from both the Al-Nusra Front and the Islamic State in Iraq and al-Sham in the town. She claimed that the car bombs that exploded recently in Lebanon were assembled in a workshop in Yabrud (the Lebanese TV channel Al-Mayadeen, December 11, 2013).

6.   During the last campaign (which has not yet ended), which included large Hezbollah forces, the organization suffered heavy losses:in November and the first half of December 2013, 47 Hezbollah operatives were killed.Thus the total number of casualties, which amounted to around 180 at the end of the Al-Qusayr campaign (early June 2013), now amounts to around 300. Note: To date, we have counted the names of 272 dead.However, this is the minimum and we must take into account that not all the names of those killed were publicized, not all of them were sent for burial in Lebanon and not all of them are known to us.Accordingly, in our estimation, their number may be higher and total around 300 (see Appendix A for details of the fatalities).[4]

7.   The 47 operatives who were killed in November and the first half of December 2013 fought in three combat zones:the rural eastern area of Damascus (13 dead); the battles in Al-Qalamoun (5 dead), the battles in the area of the grave of Al-Set Zaynab (24 dead).As in the past, most of the fatalities (20) are from southern Lebanon and the rest (11) are from the Beqaa Valley, Beirut (1), and from Syrian territory (1).We believe Hezbollah may exaggerate the number of operatives killed at the grave of Al-Set Zaynab and, on the other hand, may understate the number of fatalities in the rural eastern area of Damascus and in Al-Qalamoun, with the aim of legitimizing their deaths from a religious standpoint in the eyes of the Lebanese Shiite community. Coffins in the shape of candy, sent to Nasrallah from the town of An-Nabk, in the Al-Qalamoun mountains, where Hezbollah suffered losses (Syria Change website, December 5, 2013)

b.  Ali Hossein al-Bazi (Hajj Sajed)– Hezbollah commander.He was a native of the village of Bint Jbeil, in southern Lebanon, but lived in Harat al-Saida (Sidon).He was formerly in charge of Hezbollah in Harat al-Saida.His job was training Hezbollah operatives.He was killed in battle in Al-Qalamoun on December 8, 2013.

Hassan Nasrallah’s speech: A response to criticism of Hezbollah

9.   In an interview granted to the Lebanese channel OTV (December 3, 2013), Hassan Nasrallah admitted that his organization was forced to expand its involvement in the fighting in Al-Ghouta al-Sharqiyya and Al-Ghouta al-Gharbiyya (the rural areas east and west of Damascus).He also noted that the organization works against the “armed groups” in the Al-Qalamoun region along the Syrian-Lebanese border.As a direct result, Nasrallah admitted, Hezbollah had suffered a large number of fatalities. However, he denied Lebanese media reports stating that Hezbollah’s losses amounted between several hundred and 1,000 (Note:In our assessment, this estimate reflects the number of Hezbollah fatalities since the beginning of its involvement in Syria).

a.  The grave of Al-Set Zaynab (south of Damascus): Nasrallah noted that while most of the rural sections of Damascus have fallen in the hands of the rebels, the compound of the grave of Al-Set Zaynab remained isolated.He said that the “armed groups” (in this case, the term “armed groups” is used for jihadis) are striving to destroy the shrine and that this could have led to an inter-communal war.He said that Hezbollah’s involvement during the civil war in Syria began with dispatching 40-50 operatives to the area of ​​the shrine in order to assist the Syrian army and residents of the area in defending it. “This is how our story in Syria began” (Nasrallah does not specify how many of the organization’s operatives are currently protecting the shrine, suffering heavy losses).

b.  The Al-Qalamoun mountain range: Nasrallah stressed that most of the fighting is carried out by the Syrian army and “national defense forces,” while Hezbollah’s participation is, as he said, “extremely modest.”He went on to specify the security-related reasons underlying the organization’s involvement in the fighting in this area:he claimed that the fall of the Al-Qalamoun area in the hands of the “armed groups” would mean “dozens and hundreds of car bombs in Lebanon.”Therefore, Hezbollah took “preemptive action” aimed to “prevent the armed groups from taking control of the places opposite the border [the Syrian-Lebanese border].”He added that most of the car bombs that exploded in Lebanon came from Yabrud and An-Nabk (north of Damascus) and passed through the area of the Lebanese town of Arsal (northwest of Baalbek).He said, “We are really defending inside Syria, but [actually] we are protecting Lebanon.” The cities of Yabrud and An-Nabk (Syria) and Arsal (Lebanon) which, according to Hezbollah, are the places from where car bombs are sent from Syria to Lebanon (Google Earth)

12.   Hassan Nasrallah(in response to criticism, in our opinion) admitted that his organization had suffered many losses but claimed that he is being transparent and is not attempting to conceal them:“When we have a shahid, we announce the shahid and make sure to bring his remains for burial in broad daylight.We are proud of our shahids.”Nasrallah denied Lebanese media reports claiming that the number of fatalities is 500 or 600 and could reach as high as 1,000.[5] Moreover, he claimed that the number of fatalities was less than 250-300. However, Nasrallah refused to specify the total number of Hezbollah fatalities, merely saying that “if there is a shahid, we notify his family, and the body arrives, and we accompany him on his final journey.”

Reactions in Lebanon to Hezbollah’s involvement in Syria

13.   Strong criticism of Hezbollah’s involvement in the fighting in Syria continues in the Lebanese media and the Lebanese scene.This criticism, on the part of Hezbollah’s opponents, was expressed in various editorials, cartoons against Hezbollah’s participation in the fighting in Syria, and remarks made by Lebanese officials who belong to the anti-Hezbollah camp. For example, former Lebanese Prime Minister Saad Hariri claimed that Hezbollah leader Hassan Nasrallah is involving Lebanon in the Syrian crematorium and added that it’s a pity for Lebanese blood to be spilled this way. These remarks were made in response to an interview with Hassan Nasrallah, in which he said that “he himself is prepared to go fight in Syria” (Sky News in Arabic, October 18, 2013).Former Lebanese Prime Minister Fouad Siniora claimed that Hezbollah is killing the youth of Lebanon and Syria, and that its media is misleading the Lebanese public (Al-Hayat, published in London, September 14, 2013).