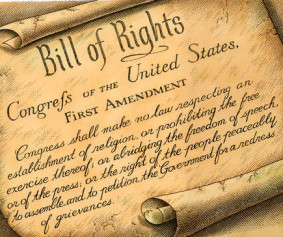 Only in the USA – freedom conscious determined individuals can successfully fight to protect their unique right to speak and write freely about issues important to our national security and the public’s safety without fearing intimidation from abroad.

An Act To amend title 28, United States Code, to prohibit recognition and enforcement of foreign defamation judgments and certain foreign judgments against the providers of interactive computer services.  Be it enacted by the Senate and House of Representatives of the United States of America in Congress assembled, Securing the Protection of our Enduring and Established Constitutional Heritage Act. Courts, or the “SPEECH Act”.

(1)The freedom of speech and the press is enshrined in the first amendment to the Constitution, and is necessary to promote the vigorous dialogue necessary to shape public policy in a representative democracy.

(3) These foreign defamation lawsuits not only suppress the free speech rights of the defendants to the suit, but inhibit other written speech that might otherwise have been written or published but for the fear of a foreign lawsuit.

(4) The threat of the libel laws of some foreign countries is so dramatic that the United Nations Human Rights Committee examined the issue and indicated that in some instances the law of libel has served to discourage critical media reporting on matters of serious public interest, adversely affecting the ability of scholars and journalists to publish their work. The advent of the internet and the international distribution of foreign media also create the danger that one country’s unduly restrictive libel law will affect freedom of expression worldwide on matters of valid public interest.

(5) Governments and courts of foreign countries scattered around the world have failed to curtail this practice of permitting libel lawsuits against United States persons within their courts, and foreign libel judgments inconsistent with United States first amendment protections are increasingly common…...more….