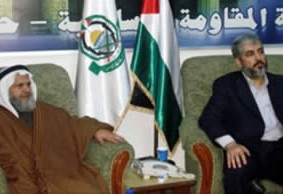 Left: Khaled Mashaal, chairman of Hamas’ political bureau, at a conference of Arab parties where he said that most of the money received by Hamas and most of its efforts were invested in its military buildup (Paltimes.net, November 12, 2009).

1.   The rebuilding of the Gaza Strip after Operation Protective Edge, once it ends, can be expected to be an important issue on the Arab and international agenda. It is therefore interesting to note remarks made by Khaled Mashaal, chairman of Hamas’ political bureau, about a year after Operation Cast Lead (when the civilian rebuilding of the Gaza Strip was also on the agenda).

2.   On November 12, 2009, Khaled Mashaal met with several senior figures at a meeting of Arab parties in Damascus. One of his main themes was that Hamas would continue the path of “resistance” [i.e., terrorism], and therefore most of Hamas’ money and efforts in the Gaza Strip were invested in military preparations. His main talking points were the following (Paltimes.net):[1]

1) Most of Hamas’ efforts in the Gaza Strip are invested in military preparations: “On the surface, [statements in the Gaza Strip] refer to reconciliation [between Hamas and Fatah] and rebuilding, however, what is not revealed is that most of Hamas’ funds and efforts are invested in the resistance and military preparations… We are intent on the resistance.”

3.   Khaled Mashaal made the remarks almost year after Operation Cast Lead, when the civilian rebuilding of the Gaza Strip was proceeding slowly. The remarks reflected Hamas’ genuine order of priorities, the result of its being a “resistance” organization and of its strategy in the conflict with Israel. Hamas’ top priority was the rehabilitation of its military infrastructure in the Gaza Strip, which was damaged in Operation Cast Lead. It channeled most of the funds that poured into the Gaza Strip, including those from Arab and international aid funds into its military buildup, at the expense of the civilian rebuilding of the Gaza Strip.

4.   In retrospect it is evident that Hamas’s order of priority, as reflected by Khaled Mashaal’s remarks, was implemented on the ground during the five years between Operation Cast Lead and Operation Protective Edge (during which Hamas also had to deal with the consequences of Operation Pillar of Defense). Funds and resources (such as cement and iron) received by the Gaza Strip for civilian purposes were used for Hamas’ military-terrorist infrastructure, particularly on increasing the number and quality  of its rockets and on the tunnel project. In ITIC assessment, Hamas’ order of priorities will be on the political agenda after Operation Protective Edge, and will necessitate close supervision of how resources funneled into the Gaza Strip for its rebuilding are used.

[1]For further information see the November 17, 2009 bulletin “Khaled Mashaal makes it clear that Hamas is determined to continue the path of ‘resistance’ (i.e., terrorism) and that ‘other statements are political maneuvers.’ He reveals that Hamas uses most of its financial resources in the Gaza Strip for military purposes.”

34.   Qassem Suleimani, commander of the Iranian Qods Force, issued a statement emphasizing Iranian support of the “resistance.” He claimed Iran would not stop defending the resistance and the Palestinian people “even for one second.” He claimed the world would understand that disarming the resistance was “a false belief and will never happen.” He compared Palestine to the eruption of a volcano that could not be stopped. He said that “when the time is right, we will take out our anger on the Zionists” (Farsnews.com, July 30, 2014). In response, Ziyad al-Nakhala, deputy secretary general of the PIJ, which is supported by Iran, said the statement expressed Iranian support for the resistance of the Palestinian people and it reinforced the bond between the Palestinian people and Iran (Al-Mayadeen TV, Lebanon, July 30, 2014).

35.   On July 29, 2014, Khaled Mashaal, chairman of Hamas’ political bureau, was interviewed by PBS’ Charlie Rose in Doha. The interview, whose objective was to present Hamas’ position to the American public, dealt extensively with the current fighting. Khaled Mashaal also answered questions regarding Hamas’ position in the Palestinian-Israeli conflict. He tried to represent Hamas as a pragmatic movement that did not adhere to radical Islam (“In Hamas,” he said, “we believe in modern Islam, we are not fanatics or fundamentalists…”

36.   Khaled Mashaal said the following about the current round of fighting:

1)  In answer to the question of who began the fighting, Khaled Mashaal blamed Israeli “aggression,” changing the order in which the events occurred. He claimed the events began when “some teenagers were unaccounted for in the West Bank” [Hamas, he claimed, had no knowledge about who was behind their abduction and murder]. Netanyahu, he claimed, did not rein in the settlers, who burned Muhammad Abu Khdeir alive, and then Netanyahu “moved to Gaza,” where he started the “aggression” against the Gaza Strip. The rocket fire, he claimed, was the Palestinian defensive response to Israel’s “aggression.” He claimed the rocket fire that preceded the Israeli response was only “an Israeli narrative.”

2)  As to Hamas’ conditions for a ceasefire and its position to the Egyptian initiative, he said Hamas demanded the siege of the Gaza Strip be lifted. The siege had been a fact of life for the Palestinians for eight years, he said. All the border crossings had to be opened and an airport and sea port had to built. Israel also had to release hundreds of prisoners who had been detained since June 12, 2014 (i.e., during Operation Brothers’ Keeper). Hamas, he said, rejected the Egyptian initiative because it did not include lifting the siege and it had been released without previous consultations with the Palestinian factions in Gaza.

3)  Khaled Mashaal was asked why John Kerry’s proposal for a one-week ceasefire had not been accepted. Hamas, he said, appreciated Kerry’s efforts to stop the bloodletting but, he claimed, it was not Hamas but the Cabinet of Israel that had refused the proposal. He blamed Israel for the failure of Kerry’s proposal, as it caused the failure of the nine months of negotiations between Israel and the Palestinians.

4)  Khaled Mashaal praised Hamas’ alleged high moral standards. Hamas, he claimed, avoided harming civilians [completely ignoring Hamas’ massive rocket barrages which deliberately target the civilian population]. That was shown, he said, by the fact that Israelis who were killed were combatants, while most of the Palestinian casualties were civilians. Israel, he claimed, killed between 100 and 200 civilians every day while Hamas killed combatants [Khaled Mashaal and other Hamas spokesmen do not mention the hundreds of terrorist operatives killed in the fighting, adding them to the total number of civilian dead].

37.   Khaled Mashaal answered questions about fundamental issues in the Palestinian-Israeli conflict while whitewashing Hamas’ refusal to recognize Israel and its efforts to destroy the State of Israel, as do all Hamas spokesmen in interviews directed at Western public opinion. Two central questions were dealt with:

1)  Was Hamas prepared to live in coexistence and peace with Israel?Khaled Mashaal repeatedly avoided answering, and when the interviewer insisted, said that when Israel withdrew from the Gaza Strip completely [Israel withdrew from the Gaza Strip completely eight years ago] and from the West Bank, and if the Palestinians received Jerusalem as their capital, and when the refugees returned [Khaled Mashaal has claimed that six million Palestinians refugees were from their “homeland”], then peace could be reached. It was Israel, he said, that had killed the peace process.

2)  Did Khaled Mashaal believe that the conflict could be resolved by violence?Khaled Mashaal replied that if the Palestinians did not achieve peace then the resistance was legitimate. Asked if he believed he could use military force to make Israel leave the West Bank and the Gaza Strip, he said “I do believe this, it is a conviction.” He added that “every Palestinian can die so that the next generations can live peace and freedom.”

39.   Riyadh al-Maliki, minister of foreign affairs in the national consensus government, said they were in contact with the attorney general of the ICC in The Hague to advance legal procedures against Israel. He claimed it was one of the options open to the Palestinians but they had to take into consideration it was a “double-edged sword,” because an investigation would include not only Israel’s “crimes” but the acts of the Palestinian side. He claimed that was the reason that so far they delayed formally approaching the ICC (Al-Arabiya Al-Hadath, July 31, 2014)

Hamas Tries to Provoke the Palestinians in Judea and Samaria

30.   Hamas activists in Judea and Samaria are trying to provoke the Palestinians in Judea and Samaria to participate in anti-Israeli activities. Hamas issued a statement calling on the Palestinian populace to declare Friday, August 1, 2014, a “day of rage” against Israel. According to the statement, after the Friday prayer protest marches and other activities would be held in support of the Gaza Strip (Alresala.net, July 30, 2014). On July 30, 2014, Hamas in Al-Najah University in Nablus issued an invitation to “a solidary march with the Gaza Strip and support of the resistance” after the evening prayer in the al-Haj Nimr mosque in Nablus on July 31, 2014 (Facebook page of Shabakat Filatin Lil-Hiwar name, July 30, 2014; Facebook page of the Islamic Bloc in Al-Najar University, July 30, 2014).

31.   Hamas spokesman Fawzi Barhoum, interviewed in the Al-Shifa’a Hospital, asked why the Palestinian people in Judea and Samaria were not active, in view of the events in the Gaza Strip. He called on the residents in Judea and Samaria to rise above political disagreements, declare a struggle, and take their cars and “run over Jews and kill dozens of Zionists” (Alquds.com, July 30, 2014). 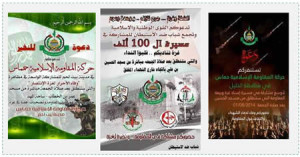 * The full versions of these reports by Meir Amit’s website can be found under the title “Prioritization of Hamas’ Military Buildup vs. the Gaza Strip’s Civilian Needs: Hamas’ genuine strategic priorities according to Khaled Mashaal, about a year after Operation Cast Lead”. And Operation Protective Edge – Update No. 17 (As of 1200 hours, July 31, 2014)