Hamas Trains to Attack the IDF 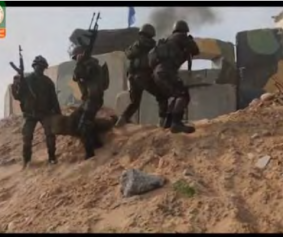 Left: Izz al-Din al-Qassam Brigades operatives simulate an attack on an IDF post and abduct “an IDF soldier,” dragging him away to the left (Paltimes.net, December 27, 2014).

Careful examination of the list of Gazans killed last summer during Operation Protective Edge, uncovered 50 Hamas terrorists whose names were missing from lists published by Hamas and the Palestinian Authority (PA).  “We believe that the 50 names, identified by us, represent a partial list and that there many other terrorists whose names are not included in the various casualty lists,” said Dr. Reuven Erlich, who heads the Meir Amit Intelligence and Terrorism Information Center.

The deliberate concealment, or lying about the number of dead terrorists has long been a strategy used by the PA and Hamas to falsely accuse Israel of killing innocent civilians.

On August 5, 2014, shortly after Israel begun to retaliate against the barrage of rockets fired on the country from Gaza, the ministry of the interior in the Gaza Strip issued a warning, which it also posted on its Facebook page, urging the Palestinians not to divulge information about terrorist operatives (“resistance” casualties) killed during Operation Protective Edge.” This information was exposed the following morning by the Center, but received little, if any, coverage in the Western media.

Instead of denouncing the PA and its jihadi terrorist subsidiaries, the media as well as the international donor community has been eager to join their anti-Israeli propaganda campaign. This, of course, requires turning a blind eye to advanced terrorism training that is taking place in Gaza. But The Meir Amit Intelligence and Terrorism Information Center again documented how “Hamas’ Izz al-Din al-Qassam Brigades and National Security Forces Exercises Simulate Takeover of IDF Posts near Gaza Strip and Abduction of Soldiers:”

1. On December 23, 2014, the national security forces in the Gaza Strip, one of the internal security forces controlled by Hamas, held graduation exercises for an officers’ training course. The exercise simulated the storming and takeover of an IDF post and was held in an Izz al-Din al-Qassam Brigades training facility in the southern Gaza Strip. In addition, on December 27, 2014, the Izz al-Din al-Qassam Brigades issued a video of dozens of armed operatives simulating attacks on IDF posts near the border security fence. In one of the simulated attacks “IDF soldiers” were abducted from the post. In another the operatives attacked and took control of a post, making off with the bodies of “dead IDF soldiers” (See the Appendices.)

3. In ITIC assessment, Hamas feels the attacks carried out on IDF posts near the border during Operation Protective Edge had positive results. Thus, exercises simulating attacks on IDF posts are intended to improve the operational skills of the Izz al-Din al-Qassam Brigades and the security networks affiliated with to them. The final goal is apparently to attack IDF posts during the next round of fighting, for which they are preparing. In addition, the exercises indicate the great importance Hamas attaches to seizing soldiers or the bodies of soldiers as bargaining chips in the negotiations for the release of terrorist operatives imprisoned in Israel.

4. On December 27, 2014, the Izz al-Din al-Qassam Brigades issued a video through the Paltimes.net website, illustrating the rehabilitation of its military capabilities after Operation Protective Edge. The video (which was then posted to YouTube) showed dozens of armed terrorists wearing uniforms and bulletproof vests simulating attacks on front-line IDF posts. In one attack they destroyed a front-line defensive post, entered and took the “bodies of IDF soldiers.” In another video terrorists attacked a post, abducted a soldier and left the scene (See Appendix A for pictures).

5. In the video the operatives demonstrated a variety of military tactics, among them launching long-range M-75 rockets; sniping; using tunnels to infiltrate Israeli territory; landing naval commando forces behind Israeli lines and using infantry forces to attack IDF posts. The video was made up of segments, some of them old and recycled for propaganda purposes. It is unclear when the segments dealing with attacking posts and abducting the IDF soldier were made.

6. On December 23, 2014, the national security forces in the Gaza Strip held a military exercise simulating the attack and takeover of an IDF post. They detonated IEDs and used live mortar and light arms fire (See Appendix B for pictures).

7. The exercise took place during the graduation ceremonies of 166 operatives of the eighth officers’ training course. The course was held during November and December 2014 and dedicated to the martyrs of Operation Protective Edge. The final exercise was held at an Izz al-Din al-Qassam Brigades training facility in the southern Gaza Strip, east of Rafah.

8. General Hussein Abu A’dhra, the commander of the internal security forces in the Gaza Strip (and commander of the national security forces until 2011), briefed them on the final exercise. He said they were going to simulate the takeover of an Israeli military post with mortar and light arms fire, as well as IEDs. He added that the takeover of the post would translate into heavy losses for Israel (Website of the ministry of the interior in the Gaza Strip, December 24, 2014; Facebook page of PALINFO, December 23, 2014)

9. Two other senior members of the internal security apparatuses in the Gaza Strip controlled by Hamas participated in the exercise: