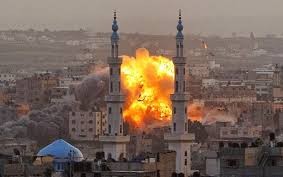 The current battle between Israel and Hamas in Gaza resembles nothing so much as the violent thrashing-about of a mortally wounded shark leaving a trail of blood in its wake.

Nothing remains static for any length of time, especially in the Middle East/North Africa (MENA) region.  That is true of countries, governments, religions, and ethnic groups; and it is also true of terrorist organizations, which have proliferated in MENA in recent decades.

To deal with such organizations as if they do not change is a sure recipe for failure. As a current example, the fearsome al-Qaida, which has understandably been focused on by the Western powers since 9/11/2001, and which seemed to be proliferating throughout not just the MENA but also sub-Saharan Africa and beyond, is now in full retreat, with its leader, Ayman al-Zawahiri less and less able to assert his authority.

Other terrorist organizations are purely regional in nature, such as Boko Haram in northern Nigeria and al-Shabaab in Somalia.  Some have become criminal syndicates, such as FARC and the ELN in Colombia.  Others operate as an extension of state power, such as Hezbollah, supported and manipulated by Iran.  Hezbollah also operates as a criminal syndicate, with about 40% of its half billion dollar budget covered by smuggling activities and extortion, both in Lebanon and abroad, especially in Latin America.

The Islamic State (IS), currently the most successful of the terrorist groups, is one of the few that is still primarily religiously driven, exploiting the resentment of the Sunni populations of Syria and Iraq to expand its area of control in those countries.

In this tragic typology, Hamas is currently unique.  In short, Hamas is an orphan.  It no longer has any ideological patron, since the Muslim Brotherhood is in full retreat throughout the region, nor does it have any state patron, since its decision to support the insurgency against the Assad regime in Syria caused Iran to withdraw funding.  It no longer can live off of smuggling activities, like Hezbollah, since both Egypt and Israel are blockading it.  Arab support for Hamas is conspicuously absent currently and commentators, especially in Egypt, have openly wished the IDF efforts well.

Fatah, whatever Abu Mazen may say in public, would be delighted if Hamas were dealt a death blow, and the population of the Gaza Strip is turning against its Hamas masters, according to opinion surveys.  In short, it is the terrorist equivalent of the mortally wounded shark thrashing about.

If this is the case, it would seem appropriate for Israel, while retaliating against rocket attacks, to also tighten the blockade and withhold supplies of food, fuel, water and electricity.  The best of the possible outcomes of the current struggle would be for the people of Gaza to take matters into their own hands and overthrow the Hamas government, at which point supplies could be resumed in return for a moderate government, supported also by Egypt, Saudi Arabia and some of the Gulf states.

* This article was first published at Globes