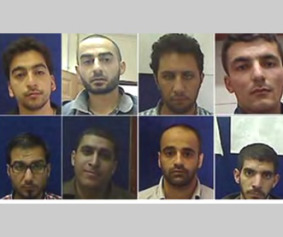 Left:  These Hamas terrorists were handled from Turkey and captured in Judea and Samaria

In August and September 2014 the Israeli security forces uncovered two Hamas military-terrorist networks operating throughout Judea and Samaria and recruiting squads to attack Israeli targets. Their operations were directed from Turkey and the operatives were trained outside Judea and Samaria. More than 30 terrorist operatives were detained and large quantities of weapons were seized.

Information about the networks (from the Israel Security Agency website, November 27, 2014):

Recruiting operatives: Most of the operatives were Palestinian students studying in Jordan. They were approached by people they knew. Candidates considered personally and ideologically acceptable were enlisted and turned over to commanders who saw to their training.

Military training: The recruits’ training was carried out in coordination with and under the supervision of Hamas military-terrorist operatives at locations in the Gaza Strip and abroad, including Jordan, Turkey and Syria. To reach the Gaza Strip the recruits went to the Sinai Peninsula and were smuggled in through the tunnels. In the Gaza Strip Hamas military-terrorist operatives trained them in using explosives, operating weapons, terrain analysis and navigation. They also learned about securing information. In Turkey they were briefed on planning military activity, including on how to attack targets in Israeli, Judea and Samaria and abroad. In Jordan they were trained in the use of weapons, in sabotage and covert activity, and were given security briefings. After training they were assigned various missions by senior Hamas figures in Turkey and Jordan.

Military activity: After completing their training they were sent back to their homes in Judea and Samaria. When they had settled they were given various missions, such as attacking Israeli targets, coordinating and transporting weapons and funds, training local squads, and locating sites suitable for creating home laboratories and operational houses.

Objectives of the terrorist attacks: The recruits were instructed to carry out a number of terrorist attacks, the most prominent of which were attacks on the Teddy [soccer] Stadium and the light railway, both in Jerusalem. They were also instructed to carry out shooting attacks and to place IEDs along the roads in Judea and Samaria, prepare car bombs, infiltrate Jewish towns and villages, and abduct Israelis in Judea and Samaria and abroad. In effect, on August 31, 2014, one of the squads placed IEDs at the Rehalim and Jat junctions in Samaria.

The most important terrorist operatives caught were:

* Manaf Muhammad Abd al-Rahman Ajbara – Born in 1986, resident of Jordan. Recruited to Hamas terrorist activity while studying engineering. Received military training. Instructed to establish a network in Judea and Samaria and carry out attacks on Israel. Helped prepare the IED used in the attack at the Rehalim junction in Samaria on August 31, 2014.

* Rajaa’i Ahmed Mustafa Amouri – Born in 1984, from Tulkarm. Imprisoned in Israel five times for Hamas terrorist activity. Recruited by a Hamas terrorist operative from the Gaza Strip at the beginning of 2014. Rented a safe house in Ramallah where weapons and materials to manufacture IEDs were stored. When detained, he handed over several weapons in his possession.

* Mahmoud Wael Mahmoud Milham – Born in 1984, resident of Anabta/Tulkarm. Was imprisoned in the past for Hamas terrorist activity. Helped rent the safe house in Ramallah.

* Abdallah Muhammad Yussuf Zeitawi – Born in 1989, resident of Jordan. Underwent three series of military training courses in the Gaza Strip in 2012-2013. In 2014 was instructed to enter Judea and Samaria and to settle there.

* Musab Khaled Ibrahim Dweib – Born in 1991, resident of Zaatra/Bethlehem. Studied in Jordan between 2010 and 2014. Instructed by Hamas handler in Jordan to support terrorist activity in Judea and Samaria by transferring weapons and funds to another operative.

* Adnan Taysir Kamel Samarra – Born in 1984. Resident of Safarin/Tulkarm. Was imprisoned four times in the past for Hamas terrorist activity. Planned to recruit a squad to carry out terrorist attacks. 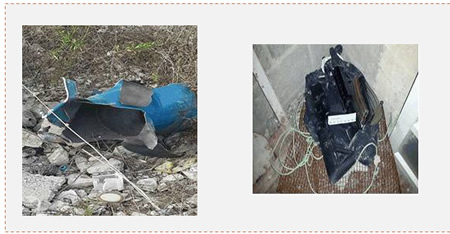 Weapons found in the possession of members of the Hamas network (Shabak.gov.il November 27, 2014).

Hamas Networks in Judea and Samaria Handled from Turkey

The terrorist networks were handed by Saleh Muhammad Suleiman al-Arouri, a senior Hamas operative living in Turkey. Saleh al-Arouri was born in the village of Aroura (Ramallah district) in 1966 and was a member of Hamas’ political bureau, where he held the prisoners’ affairs portfolio. In the 1990s he was one of the founders of Hamas’ military-terrorist wing in Judea and Samaria. He was detained by Israel in 1992 and sentenced to five years in prison for membership in a terrorist organization. After that he served various prison sentences. He was released on March 30, 2010, and expelled to Jordan, and from there he went to Syria.

In Syria he returned to anti-Israeli terrorist activity. Once in Syria he was appointed to Hamas’ political bureau and given the prisoners’ affairs portfolio. He also participated in the negotiations for the Gilad Shalit prisoner exchange deal. At the same time, as responsible for Judea and Samaria at Hamas headquarters in Syria he worked to establish, fund and maintain Hamas military-terrorist networks there. During the past two years his name was mentioned in connection with handling a Hamas terrorist network in Judea and Samaria from his current place of residence in Turkey.[3]

According to reports in the Israeli media, Israel appealed to NATO and the American administration to take steps against Turkey for allowing Hamas to establish its headquarters in Istanbul and from there to direct anti-Israeli terrorist activity. “Turkish sources” claimed the allegation that Hamas initiated terrorist attacks from its Istanbul headquarters was baseless, adding that making such information public was an attempt to defame Turkey and sabotage the contacts to end the diplomatic crisis between the two countries (Ynetnews.co.il, November 28, 2014).

On November 27, 2014, UNRWA issued a report about the humanitarian situation in the Gaza Strip. According to the report, there are 23,338 Palestinians sheltered in UNRWA schools. As of November 25, 2014, 15,726 families had received financial aid to repair their houses, and to that end UNRWA had transferred the sum of $15.1 million. UNRWA expressed concern over the slowness of the rebuilding process (UNRWA.org, November 27, 2014).

John Gatt-Rutter, the EU representative to the PA, said “A long time has gone by without enough cement or enough materials coming in that will allow people to rebuild their houses.” He added there was “a real need to move urgently and diplomatically and politically to try to work something out” (Reuters.com, November 26, 2014).[4]

Rami Hamdallah, prime minister of the Palestinian national consensus government, met with ambassadors of foreign countries and emphasized his government’s commitment to rebuild the Gaza Strip and the need to speed up the program. He called on the international community to exert pressure on Israel to increase the amount of building materials entering the Gaza Strip and to completely lift the siege. He also called on the donor countries to make good on their promises to send funds to rebuild the Gaza Strip (Al-Amad, November 26, 2014).

On December 1, 2014, dozens of Gazans whose houses had been destroyed in Operation Protective Edge demonstrated in front of UNRWA headquarters in Gaza City. They said that if the delays continued they would take more serious steps. They demanded the “siege” of the Gaza Strip be lifted and that concrete and cement be delivered (Paltimes.net, December 1, 2014).

It was recently reported that cement dealers in the Gaza Strip objected to stationing security cameras in the warehouses where sacks of cement were stored, as demanded by the oversight mechanism. Their refusal was supported by similar decisions made by the union of factories and the association of businessmen in the Gaza Strip not to station cameras in their factories (Quds.net, October 26, 2014).

Hamas sources continue opposing the establishment of a mechanism to oversee the delivery of building materials into the Gaza Strip. The following remarks were made:

Musa Abu Marzouq, a member of Hamas’ political bureau, claimed that Robert Serry, the UN envoy to the Middle East, had recently changed the oversight mechanism, based on Hamas’ demands (Alresala.net, November 26, 2014).

Senior Hamas figure Mahmoud al-Zahar claimed that officials connected to the oversight mechanism had accepted Hamas’ objections and that negotiations were underway with a number of agencies, especially the UN. He stressed that anyone in need would receive building materials, as in the past. He claimed Hamas intended to have larger quantities of building materials enter the Gaza Strip without Israel’s forcing conditions on it (Safa.ps, November 25, 2014).

Senior Hamas figure Mahmoud al-Zahar claimed that highly placed officials in Egypt had contacted the heads of Hamas to improve relations. He claimed both sides wanted closer relations and to turn over a new leaf. However, he noted the negative influence of the buffer zone along the Rafah border on the Gazans and the “resistance| [i.e., terrorist organizations] (Paltoday.tv, November 25, 2014).

Wael Nasr al-Din Atia, Egyptian representative in the PA, said that Egypt was expected to renew the indirect Israel-Palestinian negotiations in the near future. He said Egypt would invite the two sides “when the conditions are ripe” (Al-Istiqlal, November 30, 2014). 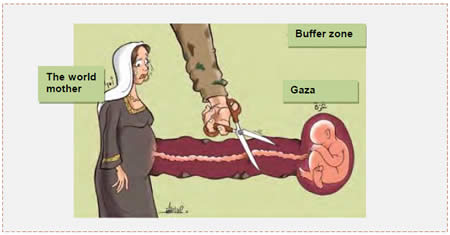 Cartoon appearing on the Felesteen website: The Egyptian buffer zone cuts the umbilical cord to the Gaza Strip (Felesteen.ps, November 30, 2014)

* These excerpts were originally published on the Meir Amit website under the title “News of Terrorism and the Israeli-Palestinian Conflict (November 26 – December 2, 2014).”