Hamas: Only Ideological and Religious Ties with Muslim Brotherhood*

In an attempt to defuse the situation and regulate its relations with Egypt, the Hamas movement sent a delegation of twelve senior figures to Egypt, the first visit of its kind since Operation Protective Edge. On March 12, 2016, the members of the delegation met with Khaled Fawzy, the head of Egyptian General Intelligence. The meeting apparently did not have a practical outcome. Another meeting was held with senior Egyptian General Intelligence officials on March 27, 2016. At that meeting, the Egyptian authorities apparently exerted pressure on Hamas to stop its support of jihadist operatives and to sever all ties with the Muslim Brotherhood, accused by the Egyptian regime of involvement in the anti-Egyptian terrorist campaign.

The Egyptian accusations of supporting the Muslim Brotherhood and the demand that Hamas sever its ties with them touched a nerve for Hamas. Since its founding, Hamas has been joined at the hip the Muslim Brotherhood in Egypt, both ideologically and practically, and maintains contacts with the movement at varying levels of overtness and intensity (see below). On the other hand, Hamas is forced to find a publicly acceptable response that will enable it to reduce Egyptian pressure and rehabilitate bilateral relations with Egypt.

With that in mind, Hamas spokesmen, among them Sami Abu Zuhri, issued public statements about Hamas’ relations with the Muslim Brotherhood. They represented the relations as exclusively ideological and religious, neither political nor organizational. They stressed that Hamas was a Palestinian movement operating for the sake of the Palestinian people, and its first priority was the struggle against Israel. Hamas, they claimed, had no interest in the internal affairs of Egypt or any other Arab country. Interviewed by Al-Arabiya on March 22, 2016, Sami Abu Zuhri said the following:

A paragraph of the text of the Al-Arabiya interview. In the [ITIC] underlined portion Sami Abu Zuhri denies all political, organizational or popular ties between Hamas and the Muslim Brotherhood in Egypt. However, he added that ideologically Hamas belonged to the Muslim Brotherhood (Alarabiya.net, March 22, 2016). Mahmoud al-Zahar made similar statements to Al-Sharq (quoted by Paltoday).

Regarding practical matters, Hamas spokesman stressed that Hamas had made a commitment to Egyptian General Intelligence that it would institute effective control of the Gaza-Egypt border to keep terrorist operatives out of the Gaza Strip. Sami Abu Zuhri and other Palestinian spokesmen also claimed Hamas had taken down posters and signs of Mohamed Morsi and senior Muslim Brotherhood figures and instead hung signs stating that Hamas’ weapons were aimed only at the “Zionist enemy” (Sami Abu Zuhri claimed that “for a number of months there have been no such signs in the streets of Gaza City.”) However, it is doubtful whether the Egyptian regime, which is fully aware of the nature of the relations between Hamas and the Muslim Brotherhood, will be particularly impressed by Hamas’ media campaign. 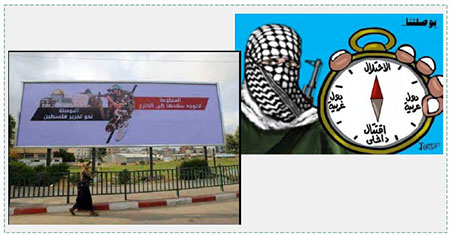 Left: A sign in the center of Gaza City. The Arabic reads, “The resistance [i.e., Hamas] does not aim its weapons outwardly [i.e., at the Arab country]. Its compass points to the liberation of Palestine.” Right: A cartoon by Hamas-affiliated Omaya Joha showing Hamas’ compass pointing to Israel and not the Arab states. “North” is “the occupation,” allegedly the target for Hamas’ weapons (Facebook page of Paldf, March 20 and 21, 2016).

Hamas: The Palestinian Branch of the Muslim Brotherhood

Ahmed Yassin also wrote and edited the Hamas Charter. Published in August 1988, it is Hamas’ most important ideological document.[3] It begins with a religious invocation and then quotes Muslim Brotherhood founder Hassan al-Banna, “Israel will arise and continue to exist until Islam abolishes it, as it abolished what went before.” Hassan al-Banna’s uncompromising hostility to Israel and his pursuit of its destruction are reflected in the Hamas Charter and manifested in Hamas’ ideology and strategy to this day.
10. Article 1of the Hamas Charter deals with its ideological roots. Article 2 states that Hamas is the Palestinian branch of the Muslim Brotherhood. The following is the translation of the Article:

“The Islamic Resistance Movement [i.e., Hamas] is a branch of the Muslim Brotherhood [operating] in Palestine. The Muslim Brotherhood is a global organization and the largest Islamic movement in modern times. It excels in profound understanding and has an exact, fully comprehensive perception of all Islamic concepts in all areas of life: understanding and thought, politics and economics, education and social affairs, law and government, spreading [i.e., indoctrinating the tenets of radical] Islam and teaching, art and the media, by that which is hidden and by martyrdom and in the other areas of life” (ITIC emphasis). 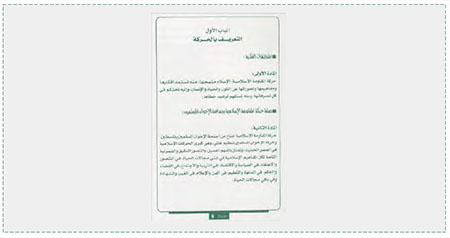 Article 2 of the Hamas Charter, stating Hamas is the branch of the Muslim Brotherhood [operating] in Palestine.

The Hamas Charter is still in force. At the beginning of 2006, the day elections were held for the Palestinian Legislative Council, senior Hamas figure Mahmoud al-Zahar said in an interview that Hamas was ideologically committed to the Charter of 1988. He emphasized that Hamas would not change a single word in the Charter calling for the destruction of the State of Israel, and would not become a political party, but would rather continue along the path of “resistance” [i.e., violence and terrorism] (Reuters, “Gaza,” January 25, 2006). In response to acting Israeli Prime Minister Ehud Olmert’s call to cancel the Charter, Hamas spokesman Sami Abu Zuhri said the movement adhered to its principles (Agence-France Press, Gaza, January 29, 2006).

At the end of October 2011, a Muslim Brotherhood delegation from Egypt visited the Gaza Strip for the first time. The delegation members were Jumaa Amin, deputy Muslim Brotherhood general guide, accompanied by two other senior Muslim Brotherhood officials (Safa, October 29, 2011). The delegation met with senior Hamas figures, including Ismail Haniyeh, at the time head of the de facto Hamas administration in the Gaza Strip, who thanked Egypt for its role in the Gilad Shalit deal. At a press conference held in the Gaza Strip, Jumaa Amin claimed Hamas and the “resistance” [i.e., the path of terrorism] had proved themselves while the path of negotiations had failed. Therefore, he claimed, there was no path other than the “resistance” for resolving the conflict with Israel (Safa, October 29, 2011).

It is likely that the meetings dealt with practical Muslim Brotherhood support for Hamas. For Hamas, the most desirable support would be political, which could be used to strengthen Hamas’ position vis-à-vis the Egyptian army and government (which at the time was forced to take the Muslim Brotherhood into consideration more than in the past.). Besides, Hamas’ relations with the Muslim Brotherhood helped it improve its political status (with Egyptian mediation) in the internal Palestinian arena,  regarding Mahmoud Abbas and the Palestinian Authority (PA). They also improved Hamas’ status in the Arab-Muslim world, given the increase in problems caused by Hamas’ relations with the Syrian regime.

At the time, Hamas probably hoped to translate the strengthening of the Muslim Brotherhood’s political status into immediate, concrete gains in its dealings with the Egypt authorities and to promote its vital interests. That would include decreasing Egyptian security activity against the tunnels to make it easier to smuggle weapons into the Gaza Strip; facilitating the passage of Palestinians and aid convoys to the Gaza Strip through the Rafah crossing; greater consideration for Hamas’ position on affairs such as the Gilad Shalit deal, or contacts for reconciliation with Fatah and the PA, where Egyptian brokering was important; keeping Egypt from exerting pressure on Hamas after terrorist attacks on Israel (as was usually done under Mubarak), while restraining Israel and keeping it from responding to terrorist attacks carried out from the Gaza Strip and the Sinai Peninsula.

[1]For further information, see the March 20, 2016, bulletin, “Hamas as a Supporter of Anti-Egyptian Terrorism.” [2]Michael Milstein, The Green Revolution, a Social Portrait of Hamas, (Hebrew), The Moshe Dayan Center for Middle Eastern and African Studies, Tel Aviv University, 2007, pp. 28,102, 108. Shlomi Eldar, Getting To Know Hamas, (Hebrew) Keter Publishing, Jerusalem, 2005, pp. 21, 22. [3]For the full version of the Hamas Charter in English, see the February 3, 2006, translation, “The Hamas Charter.” [4]On July 10, 2013, a warrant was issued for the arrest of Mohamed Badi’ on the charge of incitement to violence and to killing demonstrators during the demonstrations organized by the Muslim Brotherhood to protest the ousting of Mohamed Morsi. On July 14, 2013, Hisham Barakat, the new Egyptian attorney general, ordered the freezing of Mohamed Badi’s assets. On August 20, 2013, Mohamed Badi’ was arrested and on March 24, 2014, he was sentenced to death. On August 30, 2014, the death sentence was commuted to life imprisonment. [5]For further information, see “A high-level delegation of Egypt’s Muslim Brotherhood recently held a first-of-its-kind visit to the Gaza Strip, following up on meetings with top Hamas officials held in Cairo” at http://www.terrorism-info.org.il/en/article/17832.

*For more details see: Hamas’ Response to the Egyptian Demand to Sever Its Relations with the Muslim Brotherhood Following Strong Egyptian Pressure on Hamas