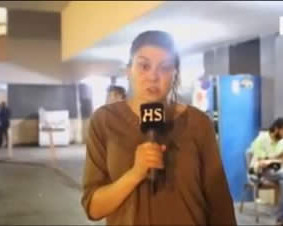 Left: A correspondent from the Finnish TV channel HS-TV reports on rocket fire from close proximity to the Al-Shifa’a Hospital (https://www.youtube.com/watch?v=Nu-e5qWXx-k)

As is readily apparent, the “free” media of the West has succumbed to being a propaganda tool for Hamas, just as it had during the Muslim Brotherhood riots in Egypt after the removal of Morsi from power.

Characteristically, foreign media have been constrained and manipulated by Islamist groups, whereas their adversaries make no attempt to limit coverage.  There are no imbedded reporters with Hamas, Hezbollah, ISIS, Boko Haram or Taliban. More importantly, those imbedded with their adversaries are careful not to report on their hosts but, rather, focus on what these Islamist groups choose to show them.

It is apparent that the Western media either does not see the imbalance in information created by this journalistic strategy or somehow it believes it has an obligation to favor Islamists lest it be accused of favoring those fighting them.

1.      Hamas’ media policy forged during Operation Protective Edge restricts local and foreign correspondents covering the fighting in their reports on military-combat activity or military-related information (especially regarding rocket fire and the use of civilians as human shields). During the operation foreign and local correspondents followed Hamas’ policy guidelines, for the most part, and mainly reported on the suffering of the local population and other civilian aspects of the fighting.

2.      However there were occasional instances of foreign correspondents who did not follow Hamas guidelines, especially towards the end of July when media personnel began leaving the Gaza Strip. During the last two weeks reports have crept into the media about rockets fired into Israeli territory from populated areas, particularly from around sensitive institutions (the Al-Shifa’a Hospital, a hotel where many of the foreign correspondents stayed, a UN facility, a church).

3.      During the first days of Operation Protective Edge Hamas forged a policy for media reports to be implemented by local and foreign correspondents covering the fighting. Its objectives were to prevent reports that would prove Israel’s claims of Hamas use of Gazan civilians as human shields, and to reinforce the propaganda theme that Israel deliberately attacked civilians and committed “war crimes.” As a result, during the first days of the fighting the information bureau of the Hamas-controlled ministry of the interior in Gaza issued instructions under the heading “Be aware of the following.” The instructions dealt with how the social networks in the Gaza Strip were to relate to Israeli activity (YouTube, July 10, 2014).

4.      Instruction number five read, “Do not publicize [information about] and do not share pictures or video clips showing rocket launching sites or the movement of resistance [operatives] in Gaza.” Those responsible for news pages on Facebook were told “don’t use close-ups of heavily armed masked operatives, otherwise your Facebook page will be closed for incitement to violence.” Hamas issued similar instructions to correspondents in other ways. For example, the Palestinian Journalist Bloc, a media group in the Gaza Strip affiliated with Hamas, instructed the media and correspondents in the Gaza Strip not to photograph or publicize information about rockets fired by military-terrorist operatives belonging to the various organizations so as not to play into the hands of Israeli public diplomacy (Hamas’ Al-Aqsa TV, July 8, 2014). 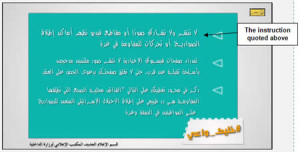 Instruction number five from the Hamas-controlled ministry of the interior in the Gaza Strip, “Do not publicize [information about] and do not share pictures or video clips showing rocket launching sites of the movement of resistance [operatives] in Gaza”

5.      During Operation Protective Edge local journalists were careful to follow Hamas’ policy guidelines, among other reasons out of the concern for their own safety.[1] That was made evident by the great emphasis reports and news stories placed on the suffering of the local population, which used Hamas propaganda without criticism. Conspicuous by their absence were reports of the fighting in which terrorist operatives participated, their losses and the use they made of civilians as human shields.

6.      In retrospect it can be said that the local and foreign media reports generally followed Hamas policy. They emphasized civilian suffering, the many civilian casualties and the increasing humanitarian distress, while severely criticizing Israel’s conduct. On the other hand, reports of the military aspects of the fighting and the sensitive issue of the use of the civilian population as human shields received relatively scant coverage.

7.      In ITIC assessment, there are several reasons for the bias in the foreign media reports from the Gaza Strip during the fighting: pressures Hamas exerts on correspondents; Hamas terrorist operatives strictly avoid exposing themselves to the media, for both security reasons and Hamas’ media policy; the danger to the lives of correspondents who report from combat zones, and the personal tendency of many of them to report the human interest angle, which emphasizes the suffering of the population. Examples can be found in conversations between Israeli journalists and foreign correspondents who covered the fighting in the Gaza Strip.[2]

8.      Regardless of the journalists’ reasons, Hamas’ media policy was clearly successful, as far as Hamas is concerned. A foreign correspondent, who preferred to remain anonymous, told Yedioth Aharonoth’s Daniel Batini (August 7, 2014) that “First, Hamas said its spokesmen could only be interviewed in the courtyard of the Al-Shifa’a Hospital in Gaza City. That meant there were long lines of correspondents waiting for interviews, and as a result they watched the bleeding wounded arriving at the hospital for treatment. That [system] created exactly the impression Hamas wanted, of an immediate emergency situation and a human and humanitarian catastrophe. Second, Hamas never allowed foreign correspondents access to military sites attacked by Israel, whether they were bases, rocket launching sites or other targets. The organization’s dead and wounded operatives were not photographed and therefore, from a media point of view, they do not exist. All that serves Hamas’ objective of representing all the casualties as civilians. Third, it was obvious that Hamas was firing rockets from civilian areas, but Hamas operatives forbid camera teams from filming them, because they did not want to reveal the tactic or the locations of the launch sites” (ITIC translation from Hebrew and emphasis throughout).

[1]A correspondent for the Palestinian magazine Al-Sabah, published in the Gaza Strip, reported that Hamas harassed any correspondent who dared to publicly criticize it. According to its sources, operatives from Hamas’ security forces broke the arms and legs of a journalist and threw him into the street (Al-Sabah, August 4, 2014). A French-Palestinian journalist named Raja Abu Daqa, whose reporting went beyond the limitations of the Hamas guidelines, said that he was summoned by Hamas’ security forces to the Al-Shifa’a Hospital. There he was interrogated, and then told that “for his own good” he should leave the Gaza Strip (Libération, July 23, 2014).

* This article appeared on the Meir Amit website on August 10, 2014, under the title “Reports from foreign correspondents in the Gaza Strip vis-à-vis the limitations Hamas placed on media coverage of the military aspects of the fighting.”