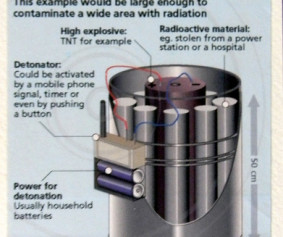 Major Cities Could Benefit from Federal Guidance on Responding to Nuclear and Radiological Attacks,

Major cities varied widely in perceptions of their abilities to respond within the first 24 hours of RDD and IND attacks (early response). For example, all 27 cities were perceived by their emergency managers as being able to conduct at least a few of the early response activities after an RDD attack, such as treating casualties, with assistance from other jurisdictions but not federal assistance. Ten of those cities were perceived as not being able to conduct any of the response activities for an IND attack without federal assistance. GAO analysis found that these perceptions were not necessarily related to a city having RDD and IND response plans but rather related to their understanding of nuclear and radiological incidents and the capabilities needed for response according to information obtained from Federal Emergency Management Agency (FEMA) officials.

GAO found limited federal planning guidance related to the early response capabilities needed by cities for the large RDD attack depicted in the national planning scenarios. Federal guidance may not be needed, according to FEMA officials, because they expect cities to address a more likely but smaller RDD attack–as they would a hazardous materials spill–with limited federal assistance. More federal planning guidance applicable to cities has been developed for IND response, but this guidance does not detail the early response capabilities needed by cities in relation to other sources of assistance. Without greater awareness of and additional federal guidance on the capabilities needed by cities for early response to these attacks, cities may not have the information they need to adequately prepare for and respond to them. This could lead to complications that result in greater loss of life and economic impacts.

Most emergency managers reported perceived needs for federal technical and resource assistance to support their cities’ early response to RDD (19 of 27 cities) and IND (21 of 27 cities) attacks. However, GAO found that federal guidance on the type and timing of such assistance is not readily available or understood by all emergency managers. This condition could lead to a disjointed and untimely response that might increase the consequences of either kind of attack. Emergency managers also reported a need for improved procedures and more information that FEMA is addressing. In addition, most emergency managers reported their city needed federal funding to maintain current capabilities to respond to RDD and IND attacks. According to DHS guidance, response capabilities are developed through planning, training, equipping, and exercising, which are essential elements of an integrated, capability-based approach to preparedness.

Why GAO Did This Study

A terrorist attack in a major city using an RDD or an IND could result not only in the loss of life but also have enormous psychological and economic impacts. Major cities are assumed to be preferred targets of such attacks, and local governments, along with their states, have primary responsibilities for early response (within the first 24 hours), with assistance from federal sources, as necessary, coming later. A disjointed or untimely response could increase the impact and undermine public confidence in federal, state and local governments’ ability to respond to an attack.

GAO was asked to review issues related to response preparedness for RDD and IND attacks. This report examines major cities’ (1) assessment of RDD and IND risks and development of response plans, (2) perceptions of their abilities to respond within the first 24 hours, and (3) perceptions of the need for federal support in early response to these attacks. GAO primarily relied on questionnaire responses from emergency managers of 27 of the 31 major cities that the Department of Homeland Security considers to be at high risk for terrorist attack, the review of pertinent federal guidance, and interviews with FEMA officials and others.

Recommendation: To provide assistance to major cities in planning for early response to RDD and IND attacks, the Secretary of Homeland Security should direct the Administrator for the Federal Emergency Management Agency to promote greater awareness of existing federal guidance and develop additional guidance where appropriate to clarify the capabilities needed by cities for these attacks, including the planning assumptions for an RDD attack and the type and timing of federal assistance for early response.

Comments: When we confirm what actions the agency has taken in response to this recommendation, we will provide updated information.