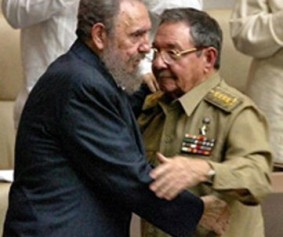 The amateur ideologues of the Obama Administration have fallen into another snakepit with their tacit endorsement of the notorious Cuban dictatorship. That’s despite all the nonsense about a blossoming Cuban economy if Washington just relents.

In reality, Washington is buckling in its opposition to one of the world’s most hideous regimes. Now its death throes will be perpetuated for Cuba’s 12 million people, with the help of such deep thinkers as Sen. Rand Paul who dreams despite all the evidence in China and Vietnam to the contrary, that contagious capitalism will bring down a police state.

Even more shameful is the helping hand – which Pres. Barack Hussein Obama acknowledged – of Canada in this new Obama enterprise. For half a century Canadian nickel interests and the always anti-American wheat lobby have blackened Ottawa’s reputation with its support of the Castros. At the Vatican, whose help Obama also acknowledged, there are echoes of the Church’s tacit support of Franco and other cruel dictatorships, as well as Jorge Mario Bergoglio’s ambiguous relationship with Argentine totalitarians as Jesuit Father Provincial in his native country before mounting the papacy. (Nor is this gesture likely to help stave off the growing influence of Evangelical Christians on the old Roman Catholic monopoly of Christian believers throughout Latin America.)

Despite all the talk of the regime moderating , Raúl Castro holds more than 57,000 political prisoners. And his dungeons have sucked in more new victims in the past year than the five previous years. Conditions are as bad as in the worst days of the Soviet Union and the East Eruopean Communist Bloc, producing hunger strikes in a noble if feeble effort against solitary confinement, beatings, restricted family visits, and denial of medical care. There is no redress except for American citizens like the naïve and very lucky Alan Philip Gross, who had maximum U.S. support for his release on trumped up charges, but only after five years..

The fiction that Cuba has anything to sell or that investments there could pay off has been refuted by decades of failed efforts by the Europeans – especially Spain – to circumvent the now tattered American embargo. Little Cuba has no hope of repaying some $25 billion it already owes these ambitious “investors”. Prepare yourself for the coming suggestion that the International Monetary Fund and World Bank (with the U.S. carrying its quarter or more of support) “amortize” these bills.

The destruction of a thriving if troubled Latin American society in the 1950s came with the help of the same cheering section of the current White House strategy (notably The New York Times. When Cuba left the real world a half century ago, it ranked fifth in the Hemisphere in per capita income, third in life expectancy, second in ownership of cars and telephones with a 76 percent literary rate. (The fact that it was 11th in the world in the number of doctors per capita gives the lie to the Castros’ claims of creating a new medical miracle.) Cuba’s prosperity then was largely paid for by a guaranteed sugar import quota in the U.S., its principal industry and income producer, and tourism for a glamorous if corrupt nearby tourist capital in Habana.

Now Cuba comes back into the world not only with its sugar industry in ruins, but in a world with a half-dozen “new” sweetener competitors (including highly subsidized U.S. domestic sugar beets), no possibility of a guaranteed American market, and a world drowning in subsidized sugar programs. (This week the U.S. has hauled Mexico up on a charge of dumping its subsidized sugar in American markets in violation of the spirit if not the letter of the North American Free Trade Agreement.)

After decades of Communist repression and mismanagement, Cuba has reached a desperate crisis. Its Venezuelan ally, which had provided subsidized energy in exchange for Castro assistance in setting up its own police state, can no longer foot the bill for Cuban energy.

That was the situation when Obama and his speechwriters rushed to fill the gap.

Now greedy American exporters – supercharged with their own program of an annual $14 billion in corruption-ridden agricultural and export subsidies – will be bidding with their Canadian taxpaying counterparts for supplying the starving country. Any extension of aid – private or government – will end up in the hands of the regime in its effort to survive by continuing to exploit an impoverished population.

Not only did Raúl Castro not make even the nominal concessions he has made in the past toward a liberalization of the regime, but so-called “reforms” permitting small scale private enterprise are a sham.

To the extent Obama can carry out his tactics despite formidable opposition in the Congress, his strategy will only intensify the implosion when it comes in Cuba. Rather, the American government should be preparing for that day, not the least for the tens if not hundreds of thousands of refugees who will flow toward Miami. Fifty years of dealing with the problems of another small Caribbean tropical island, Puerto Rico, a third Cuba’s size, have taught us just how difficult those problems will be.