From Osama to Obama: The Decline of the Pax Americana 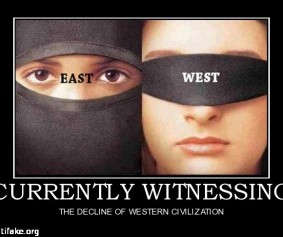 “If you don’t know where you’re going, any path will take you there.” — Chinese Proverb…

And then, only nine months later, the hyperpower began a long, agonizing decline, beginning with Bush’s response to the attack; the invasions and disastrous occupations of Afghanistan and Iraq which cost trillions of dollars and tens of thousands of lives. The financial bleeding was compounded by domestic spending excesses, such as the Medicare drug benefit.

Surpluses turned to deficits, and then more deficits. An unparalleled military machine was trashed and wasted in the deserts of Mesopotamia and the mountains of Afghanistan.  The Taliban was overthrown in days — and thirteen years later we’re still there — and still spending money and lives.

Subsequently, Proconsul Paul Bremer disbanded the Iraqi army and police, unleashing  tens of thousands of suddenly unemployed young men, who were trained in the use of weapons, and then turned them on us and on their fellow Iraqis.  He decreed that no government official could continue in his position if he was a member of the Ba’ath Party.  Of course, you could not be an official unless you were a member of the Ba’ath Party.

So the result was the total collapse of the civil administration.  After ten years we withdrew from that benighted land after having destroyed it utterly (except for Kurdistan in the north) and the country is now headed to the category of failed states, following Syria, Lebanon and Libya.  For this,  Bremer was also awarded the Medal of Freedom.

What could have/should have been done?  Here are two alternatives:

1.     Don’t invade Iraq at all, since it was no threat to the national security of the United States.  But if you do, disband the intelligence agencies and secret police, decapitate the army and police and maintain the  middle- and lower-level civil officials in their posts.  Find a compliant anti-Saddam exile and install him as president.  In and out—one year maximum.

2.    Overthrow the Taliban and turn Afghanistan over to the Northern Alliance.  In and out–six months maximum.

Overthrow Saddam without firing a shot—by blockading the country.  Within a few weeks some general would have approached Saddam and blown his head off.  End of story.

So the spendthrift son inherited a peaceful and prosperous country and bequeathed to us two of the longest wars in our history, to no good purpose whatever, and debt – lots and lots of debt.

In 2009 a man with the unlikely name of Barack Hussein Obama is installed as president.  In 2012 he is reelected, despite having solved none of the country’s problems, domestic or international.  On the contrary, every mistake that could be made was made by this man with no executive experience whatever and life experiences that turned him into one part third-world intellectual, one part 1960’s radical, and one part Chicago machine politician.

With the country in the throes of the worst economic downturn since the Great Depression, Obama convinced a compliant Congress to pass a mammoth health care bill virtually no one had read. This law will cost hundreds of billions of dollars — and we have no reasonable assurance that the net gain will be benefit the country and its citizens.

Foreign policy has been turned into the pursuit of neither the national interest nor national security, but rather such fuzzy concepts as “leading from behind”, “resets”, and “pivots”.   America watches its reputation and prestige evaporate.  The colossus is crumbling:  “Look upon my works, ye mighty, and despair.”

But so what?  Hasn’t the U.S. been a malign influence in the world for decades?  Hasn’t the United States used its wealth and power to throw its weight around, support dictators and overthrow progressive regimes?

I submit the Obama administration has been very successful—successful, that is, in fulfilling its real goals: to weaken the U.S. and diminish its influence in the world, so  the “people” can move ahead with truly important things such as climate change and “resetting” relations with tyrants like a Putin and Khamenei.

From a misguided patriot who did great damage to a supporter of ideals and principles that the U.S. has traditionally fought against, the period from Osama to Obama has brought us to where we are now.

The future will tell if the American Republic has the resilience and determination to reverse the decline and confront the true problems of society, such as structural unemployment and income disparities.  Incredible technological developments — fracking, 3-D-print manufacturing, advanced robotization and others are on the event horizon. These should usher in a new era of prosperity and freedom — except, of course, for a crushing burden of debt. It isn’t helpful that innovative thinking is wanting – where are the programs to promote widespread ownership of productive assets,  rather than making larger and larger percentages of the population wards of the state?

As always, the future is in our hands.  The challenge is huge, but if the country could survive four years of civil war and 600,000 casualties between 1861 and 1865 (the equivalent of six million now), I believe it can indeed survive, rebuild itself, and thrive again.