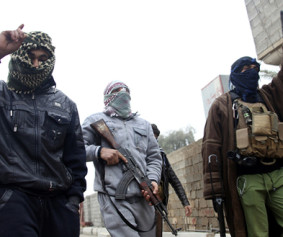 Recent in-fighting among anti-Assad rebel groups in northern Syria attests to the extent to which the area has become the new home of Islamist jihad.  While there may be as many as a thousand rebel “bands,” it’s clear that most are either al Qaeda, or affiliated with al Qaeda, or are just like al Qaeda but not quite affiliated yet. While IHS Janes‘s recent estimate claims the number of Islamist jihadis among the rebels to be around 50 percent, other estimates have the figure at 80 percent. However, according to daily reports from the region the number of new jihadist recruits making their way to Syria is steadily growing. By some estimates, the inflow from Turkeyis several hundreds per month, with groups gathering in Bulgaria and other places and arriving … by car.

Last week, after 30 people from the northern Syrian province of Idlib were kidnapped and executed by fighters associated with the Islamic State of Iraq and al-Sham (ISIS), the Free Syrian Army (FSA), which apparently objects to the imposition of sharia, gave the ISIS 24 hours to surrender and leave the country. Thereafter, the FSA “arrested” some 200 of what they called “outsiders” with ties to al Qaeda. And according to  a Jauary 7 report by Al-Monitor, the FSA had also killed what it called 34 “foreign fighters” from al-Qaeda-linked groups in the Jabal al-Zawiya region. “‘Now, we repeat that we don’t want any foreign fighters in Syria,’ [FSA spokesman Loauy] Mokhdad said, equating the ISIS fighters with the Syrian regime. ‘We do not want any terrorist groups in Syria. We will not allow them to make bases in Syria.'”

The above is evidence that the Islamist help in the struggle against Assad is no longer cheered by all Syrians rebels.  Al Qaeda has clearly used the conflict to its own advantage, establishing control of towns and regions and declaring Islamist statelets, just as it has done in Fallujia and Ramadi in Iraq lately.

Despite the opposition of secular Syrian rebels and the tut-tutting of Western governments, al Qaeda in Syria and its affiliates seem to have been extremely successful at recruiting “foreign” fighters.  Estimates vary from 5,000 to 11,000 or more (out of total rebel numbers of around 100,000).  The bulk of them reportedly have come from Tunisia (perhaps the largest contingent), the Gulf States, Libya, Bosnia, China, Chechnya and the North Caucasus.

But there are also significant numbers of “jihadis” from Western Europe, Canada and the United States.  While they may not make a significant difference to either the al-Qaeda affiliates or the secular rebels in their struggle with one another, they have surely become significant in the eyes of European and U.S. authorities.  Already “dozens” have returned to the U.S. with experience and new contacts and skills, says the FBI. But there is general agreement that “dozens” described only number those the FBI has been able to identify and place under surveillance.  Unnamed public officials put the real number at 50 “and much higher.”

ABC reports that “Al Qaeda-aligned jihadi commanders in Syria screen new American arrivals in the ranks of foreign fighters to recruit those with clean passports who have the capability to conduct future operations against the West.”
This certainly bodes ill for us. Any number of trained al-Qaeda jihadis enthused by their experience in Syria and bent on forming paramilitary groups and conducting suicide bombings could do a significant amount of damage to U.S. lives and property.

However, not only Sunni jihadists flock to fight in Syria. More than 10,000 foreign Shiite jihadists supporting Assad and Iran have been reported. ACD Fellow Jonathan D. Halevi* reports on Why did Kazakhstan nationals go to Syria in time of civil war and why did they visit Iran?

One of the Syrian rebel factions posted (on January 9, 2014) a video containing allegedly personal documents seized in a headquarters of The Islamic State in Iraq and Syria (ISIS), an offspring of al-Qaeda, which has recently been under attack by the Free Syrian Army (FSA) and other rebel armed organizations, opposing the attempt of ISIS to impose its extremist Islamic rule over the liberated areas.

The speaker in the video argued that the passports and the personal documents belong to the ISIS foreign operatives who are linked to Iran. He zooms in on passports of two Kazakhstan nationals, who visited Iran prior to arriving in Syria, and other personal documents.

The allegations with regard to the affiliation of these persons with ISIS or Iran are not corroborated. However, their visit to Iran and presence in Syria in time of civil war may raise questions about their motives.

Here are the pictures of the personal documents seized by one of the Syrian rebel factions in western rural area of Aleppo:

*Jonathan Halevi is a Fellow of the American Center for Democracy.