For Palestinians, Conflict With Jews Is Existential in Nature* 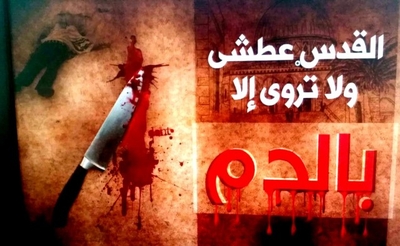 Left: “Jerusalem is thirsty, and this thirst will be quenched with blood.” Today, “three Israelis are killed and dozens injured during a Palestinian ‘day of rage.’ Two Palestinians shot and stabbed passengers on a Jerusalem bus. Another Palestinian rammed his car into a bus stop in Jerusalem and began stabbing pedestrians, wounding several of them, police said. (Reuters).

The large number of knife attacks is a product of the long-running educational war conducted by the Palestinian leadership, including both Mahmoud Abbas and Hamas.

The current terror wave proves again that the Palestinians see the conflict with the Jews as a religious, nationalist and existential in nature. The terror outbreak is rooted in the Palestinians’ demand that Jews be barred from Jerusalem’s Temple Mount and Muslims allowed unrestricted access to the site.

They cite a number of reasons to support this demand. First, that they are the only masters of the site Muslims call Haram al-Sharif, which is occupied territory. Second, that Jews’ very presence there defiles it. Third, that Jews must be kept from carrying out their nefarious plot to destroy the site’s mosques in order to turn the area into a place for Jewish prayer.

Almost every Palestinian justifies every manner of struggle to “protect” the holy mount. Still, due to cost-benefit considerations, many of them believe that the preferred way to obtain this goal at present is what they call “popular resistance.” It is code for all violent means short of live fire — stabbings, throwing stones and firebombs and hit-and-run attacks.

Hamas also backs using live fire from the territory of the Palestinian Authority, since that does not jeopardize the organization’s rule in the Gaza Strip. The leadership of the PA believes the benefit of terror attacks does not outweigh the political damage they cause to it, but it refrains from condemning them because they constitute legitimate resistance. It is in this context that the conflicting remarks about the role of Palestinian President Mahmoud Abbas in the recent wave of terror — he encourages the “popular resistance,” including knife assaults, but is willing to prevent “hot attacks,” using guns, that he believes pose a threat to his government and to Palestinian interests.

The large number of knife attacks is a product of the long-running educational war conducted by the Palestinian leadership, including both Abbas and Hamas, with the aim of inculcating the minds of the young generation with the fundamental principles underlying the Palestinian collective consciousness, to wit: There is no Jewish nation, since Judaism is only a religion, and the Jews have no history of ruling the Land of Israel, which is Palestine. Therefore, there is no justification for a nation-state for the Jewish people, and certainly not here. The mission of Palestinians, who are victims of the injustice entailed in the continued existence of the “occupation state,” is to accelerate its inevitable disappearance by means of struggle and sacrifice, which are the core of Palestinian identity.

The role of Israel’s Palestinian inhabitants, according to Abbas, is to advance these goals by means of their influence in the Israeli political system, their steadfast hold on the land and their demand that Israel be turned into a state of all its citizens. According to this approach, the Palestinians in Israel should avoid carrying out terror attacks because that could keep them from realizing their goal. The PA’s role in the territories of 1967 is to advance this goal by creating the conditions for the regular operation of the various authorities.

Palestinians created the term “Israeli nation” in order to appear moderate in the eyes of the world and the Israeli left. From their perspective, it is the entity with which they are willing to achieve peace. Thus, they seemingly hide their objection to the existence of a Jewish nation state.

In his opinion piece “Between two national movements” (Haaretz, Oct. 1), Prof. Shlomo Avineri recognizes this but suggests looking for creative ways to compromise with the Palestinians.

Why did the fire catch precisely now? One reason is the Palestinians’ worry about being pushed aside as the world focuses on other developments in the region. Another is the rise of radical Islam in the region and among Palestinians in the territories and in Israel. Abbas and Arab Knesset members felt (in contrast to the opinion of many Israeli Arabs) the need to show that their commitment to the armed struggle with Israel is no less than that of their rivals.

Thus, it seems that although most of the terrorists decide to attack spontaneously, the Palestinian leadership, especially Abbas and Hamas, have considerable influence. It is clear that the agitation of Israeli extremists also plays a significant role.

Firm and level-headed management of the fight against the present wave of terror can bring renewed quiet relatively quickly. Doing so requires massively boosting the presence of security forces as well as public alertness, gathering the waiting forces and increasing deterrence. This can be done by hurting inciters and terrorists in order to render them inactive, and by punishing their families, all within the bounds of law.

Increased construction in the settlements and terror attacks by Jews in response to terror attacks will impair both the likelihood of calming the situation and American support for Israel. The clearer it becomes to Palestinians that Israel has the tenacity to thwart their goals, the more likely it is that their leaders will fear losing control and will in turn be increasingly willing to help calm the situation. In the long run, it is likely that when Palestinians recognize that the paths of terror and of unilateral political moves are ineffective, they will begin to doubt their fundamental positions, and then it will be possible to consider an agreement. Until then, we must manage the conflict wisely.

* Brig.Gen. (res.) Yossi Kuperwasser is Director of the Project on the Regional Implications of the Syrian Civil War at the Jerusalem Center. He was formerly Director General of the Israel Ministry of Strategic Affairs and head of the Research and Analysis and Production Division of IDF Military Intelligence. He gave his permission to repost this article that was first published in the Israeli Daily Haaretz, October 12, 2015