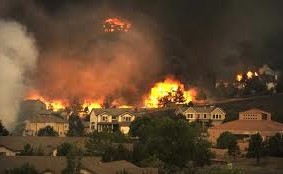 The fire raging in Colorado Springs forced William (Bill) Scott and his wife Linda to evacuate their home. Last we spoke, Bill didn’t know if they’ll have a home to return to.

As of Saturday afternoon, June 15, the apparent arson that set Colorado’s Black Forest on fire last Tuesday killed at least two people and destroyed and damged more than 388 homes. The fire that burned 15,500 acres led to the evacuation of 38,000 people. The six-hour delay of federal air tankers to help extinguish the fast spreading fire didn’t help. All the while, local law enforcement and firefighters have been collecting whatever evidence they can find to identify the arsonist(s).

Bill Scott, who’s a senior fellow at ACD, warned about such a scenario last July, speaking at the ACD/EWI Economic Threats briefing on Capital Hill. An expert on aerial firefighting, he presented a sobering analysis of the devastating Waldo Canyon Fire, pointing out that the striking rise Western U.S. wildfires may be caused by elements other than nature.

He noted that in spring 2012, al-Qaeda’s English-language online magazine, Inspire, published an article called “It Is of Your Freedom to Ignite a Firebomb,” which featured instructions on how to build an incendiary bomb to light forests on fire.

A few months later, Russia’s security (FSB) chief, Aleksandr Bortnikov warned, “al-Qaeda was complicit in recent forest fires in Europe” as part of the terrorists’ “strategy of a thousand cuts.

Bortnikov spoke of “extremist sites [that] contained detailed instructions of waging the ‘forest jihad’ and stressed that such a method had proved itself effective as it inflicted both physical and moral damage, needed little training or investment and it was extremely hard for police to find and apprehend the arsonists.”

Since then, more fatwas advocating that “Fire is cheap, easy and effective tool for economic warfare” have been issued. They’ve included detailed instructions for constructing remote-controlled “ember bombs, and how to set fires without leaving a trace.

Fire wars are not limited to Europe and the U.S. Palestinan jihadists have been setting fire to Israel’s modest forests for many years.However, political correctness seems to override Israeli and Russian warnings of that jihadist modus operandi. How many Tzarnaevs are hiding in Colorado’s woods?

While many of the fires that have scorched millions of acres and destroyed thousands of homes in Arizona, California, Colorado, New Mexico, Utah and other states have been identified as arson, none have been publicly attributed to criminal or terrorist groups, despite the presence of Mexican gangs and large number of other illegals in our Western states

Bill Scott’s “Fire Wars” presentation on YouTube led several Colorado legislators to propose a bill to allow the formation of Colorado’s Firefighting Air Corps. “In military terms, Colorado is a target-rich environment – an arsonist’s dream-come-true, and the U.S. Forest Service’s worst nightmare,” as Scott said while giving a riveting testimony before the state Senate a few months ago. He went on to say that

“Colorado wildfires took six lives, destroyed 647 homes and consumed $48 million in fire suppression costs.  And we are one match or lightning strike away from a disaster that will make 2012 look like a GOOD year.”Consider this scenario: A hot day with humidity levels below 10 percent. High winds, blowing into a dead-end valley, toward a picture-perfect town on the shore of a large mountain lake. Also watching the weather, an Islamic jihadist decides, ‘Today’s the day.’ He takes off in a rented Cessna 172 and flies across the mouth of that valley, pitching lighted road flares from the airplane. In a matter of minutes, a wall of fire with flames topping 200 feet roars up that valley, trapping hundreds of tourists and citizens.

“The local U.S. Forest Service district ranger issues a top-priority emergency call for fire-fighting air tankers, noting that lives and property are in imminent danger. A harried federal dispatcher responds with this chilling truth: ‘We’re out of air resources. We’re fighting fires all over the nation, and all federal assets are committed. You folks are on your own.”

“Within hours, the small Colorado town burns to the ground and hundreds of trapped people die horrific deaths. After-action reviews conclude that the deadly fire was ignited by an al Qaeda terrorist – who was never caught – and all fatalities were attributable to ‘insufficient firefighting resources.’ If large air tankers had been deployed in a timely manner, a protective corridor through the conflagration could have been created, providing an escape route.”

“Some will scoff and dismiss that scenario as mere fiction, noting that Colorado has never suffered such a disastrous fire. True, but we’re in a new era, facing a perfect storm of unprecedented elements: Drought; tinder-dry beetle-kill trees blanketing millions of acres; a real-and-present terrorist threat; and a cash-strapped, dysfunctional federal land-management agency that has less than a dozen large air tankers to serve the entire nation.”

Indeed, a state firefighting airforce would make Colorado independent of the cash-strapped, dysfunctional federal land-management agency, reducing the response time from six hours to 20 minutes. Colorado’s Senate Bill 245 was reluctantly approved last April by the Democratic majority; however, it refused to allocate the funds necessary to buy the air tankers. It was signed into law last week by Colorado’s Governor John Hickenlooper.

Ironically, Bill and his wife had to evacuate exactly one week after the unfunded bill was signed into law, and the worst fire in Colorado history was raging, endangering the state’s citizens, its forests and economy.

In California alone, during the first two weeks of June, wild land fires have already surpassed the total cost of the last two years of firefigthing in rural areas.

Most U.S. state economies seem to be rebounding this year. However, recovery from anticipated natural disasters could easily deplete their treasuries.  There is little that can be done to prevent huricane destruction. However, states, as well as the federal government, could and should more to do to minimize the effects of man-made forest fires.

NOTE: Just prior to the posting of this blog, we learned that the winds changed and that the Black Forest fire is now 45 percent contained.