All analysts agree that many countries engage in unfair trading practices.  The disagreement lies in how to respond.  The free-market types argue that mercantilist policies—such as those employed by China—don’t work.  China cannot continue running trade surpluses and manipulate their currency without eventually doing great harm to their domestically.  In other words, economic fundamentals, like the laws of physics, will prevail.  Some assert —beginning with President Trump—countries such as Germany and China take advantage of America’s good will; stealing American works’ jobs and wealth.  These advocates argue that the US must be engaged in similar tactics in this “economic warfare.”

Too often one loses sight of the impact domestic policy plays in the conduct of economic warfare.  U.S. economic policy decisions, however well-intentioned, nullify efforts in dealing with countries like China.  Congress and the administration must be provided with the analysis of how potential legislation hurts the U.S. economy and fuels economic conflicts.  The main objective of these analyses should be the short and long-term impact certain economic legislation has on our foreign policy aims and goals.

A historical example of impact was President Nixon’s decision to take the U.S. off the gold standard in 1971. The monetary policy of the Federal Reserve undermined U.S. efforts in the Cold War; the dollar windfall provided the Soviet Union funds to finance its military and overseas operations.

When President Reagan took office in 1981, the inflation rate was 9.3%.  The Federal Reserve, under the aegis of Paul Volker, raised interest rates to stifle the historic high inflation rate.  Volker’s intervention led to lower inflation and a stronger dollar, strengthening the U.S. economic conflict with the Soviet Union.  The growing strength of the dollar helped Pres. Reagan convinced Saudi Arabia to lower oil prices.  This resulted in the loss of a main source of revenue for the Soviets that prevented them from keeping pace with the Reagan administration’s defense buildup, convincing Gorbachev to implement Glasnost and Perestroika.

What would a contemporary example look like?  A recent headline in the Financial Times, reads:  “White House touts initiative it says could provide $200bn for infrastructure,” referring to the potential Saudi investment in construction projects in the U.S.  However, one could write that an equally valid headline that reads: “President Trump initiative will increase the trade deficit by $200bn.”

How can this be true?

A country’s trade in goods and services and the resulting deficits/surpluses are only part of the equation regarding international economics.  Exports and imports of goods and services are a subset of what is known as the international transaction accounts, which consists of two equal segments of an accounting ledger:  current accounts (balance of payments) and financial accounts (sometimes referred to as net borrowing on current-account transactions.)  The former is the technical name of the part of the ledger which measures the value of imports and exports of goods and services.  The latter is the part of the ledger which measures the value of U.S. direct investment in foreign countries and foreign direct investment in the United States.  Put in simpler terms; the current accounts measure net exports:  the financial accounts measure net investments.

By definition, current accounts must offset the financial accounts of the United States—just as in accounting, where the credit and debit columns must offset each other (i.e. the two columns must equal.)  For instance, if the U.S. runs a current account deficit, then it must run a financial account surplus. Because of the high demand for savings to finance public and private debt, the U.S. seeks foreign investments, the result of which is a positive balance on current account transactions.  On the flipside, it means greater trade deficits.  If the U.S. wants to run a trade surplus, then it would also have to run a financial account deficit.  You can’t have a surplus (or deficit) in both accounts at the same time. 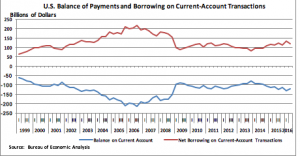 The Information Technology and Innovation Foundation (ITIF) recently released a paper that goes into very good detail on the mercantilist and illegal practices of China.  The very security of the U.S. is tested by the daily cyber-security attacks—backed by the Chinese Communist government—against U.S. government agencies and corporations; stealing vital information worth untold amount of money to be used for improving its military and economy.  It is reasonable for the U.S. to promote fairer trade with other countries creating a more balanced trading system.

Not all trade deficits with countries like China and Germany are the result of unfair trading practices or mercantilist policy.  Much of it is due to a federal tax code that favors consumption and debt over savings, and an unwillingness of politicians to pay for increase spending on current programs, as well as any new initiatives, through higher taxes. Over the years, this has resulted in declining saving rates of both the U.S. public and private sectors.  The graph below shows two components:  the overall size of the federal debt (red line) and the U.S. balance of payments (i.e. trade surplus/deficit).  One can see the rise in the latter coincides with the rise in deficit spending.

The graph below compares the same U.S. balance of payments with the individual’s personal savings rate.  Americans saved, on average, 12.8% of their disposable income between 1970 and 1975; between 2003 and 2007 it was only 3.6%.  This is significant because the federal government needs Americans’ contribution to the pool of savings to avoid tapping foreign investors.

This is not to say that President Trump’s agreement with Saudi Arabia for investment, as in the example above, is not beneficial to the country.

The problem lies with a lack of strategy and underlying analyses of the administration’s economic policies.  Trade deals such as TPP and NAFTA were cited as “bad deals,” increasing the deficit and moving jobs overseas.   Closer scrutiny finds this to be not fully accurate.

The administration’s talk on trade, tariffs, and “economic” threats points out the economic conflicts. However, it seems to fall short of considering how security and economics intersect, how this intersection impacts policy and how to respond to China’s economic warfare. Creating a Geo-economics Analyses Unit within the Treasury Department would help to better face economic warfare from China and others by coordinating the nation’s economic and security needs.