Examination of Names of Palestinians Killed in Gaza* 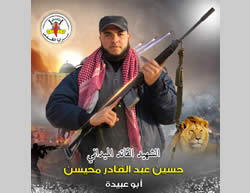 The findings of the current examination

1.   This document is the second in a series of publications of the Intelligence and Terrorism Information Center (ITIC) examining the names of the Palestinians killed in Operation Protective Edge. The goal is to ascertain the identity of terrorist operatives and non-involved citizens, and to examine the ratio between them.

2.   To date, the ITIC has examined the first 300 names on the Palestinian Health Ministry’s lists. In its second examination, the ITIC examined another group of 150 names of Palestinians killed between July 12 and July 19, 2014, in the order in which the names appear on the Palestinian Health Ministry’s lists (see Appendix C). The present examination also includes Palestinians killed during the first two days of the IDF’s ground operation in the Gaza Strip (which began on July 17, 2014).

3.   Based on our examination of the second group of 150 names on the Palestinian Health Ministry’s list, we reached the following findings:

3)  We identified 66 names that appear on the Health Ministry’s second list as non-involved civilians.

4)  Fifteen names of dead Palestinians that appeared on the list have not yet been identified. At this stage we cannot determine whether they were terrorist operatives or non-involved civilians.

5.   Below is a breakdown of 71 terrorist operatives identified by us, by organizational affiliation:

Summary of the findings to date

6.   Weighting the findings of the current examination and the previous findings yields the following results:

3)  The identity of 18 names is unknown at this stage (15+3). Therefore, it is not yet possible to determine whether they were terrorist operatives or non-involved civilians.

7.   Due to Hamas’s policy of concealment and deception, we believe that the number of terrorist operatives that we have identified, based on the lists examined to date, is minimal. This is because we take into account that there are terrorist operatives who do not appear in the Palestinian Health Ministry’s records (either deliberately or because their bodies have not yet been recovered). In any case, out of all 289 names of those killed that we were able to identify on both lists, terrorist operatives constitute about 49% and non-involved civilians constitute about 51% of the names. This ratio may vary as the ITIC continues to examine the names of those killed.

How does the Palestinian Health Ministry compile its list of names of Palestinians killed? (Further to the previous document)

8.   In our examination of the names of the Palestinians who were killed, we encountered and still encounter many difficulties in identifying them. This is due to the reporting method of the Palestinian Health Ministry, which is an important factor in Hamas’s policy of concealment and deception. While it is Hamas that sets the policy, the one who compiles and publishes a daily list of names of those killed in Operation Protective Edge is Dr. Ashraf al-Qudra, spokesman for the Hamas-controlled Palestinian Health Ministry in the Gaza Strip.

9.   Dr. Ashraf al-Qudra, 41, resident of Khan Yunis, the father of two sons and two daughters, studied medicine in Pakistan and at hospitals in the Gaza Strip. He recently received his MD. To the best of our knowledge he was a Hamas activist in the 1990s and, in our assessment, has continued to be affiliated with Hamas since then.[1] A few years ago he was appointed spokesman for the Health Ministry and was given the important and sensitive (from Hamas’s perspective) task of compiling and publishing lists of those killed in IDF operations. Dr. Al-Qudra is often interviewed in the media. His remarks are blatantly[2] hostile to Israel and are consistent with Hamas’s propaganda line.

10.    Dr. Al-Qudra compiles the daily lists of those killed in Operation Protective Edge in his office at Shifa Hospital (which also serves as the headquarters where Hamas leaders are based). To prepare the lists, Dr. Al-Qudra has a team of assistants who update him 24 hours a day about Palestinians killed in Israeli attacks (maannews.net; AFP, July 27, 2014). In our assessment, this team utilizes reports from the field in various areas in the Gaza Strip. It is, therefore, an entire system that operates continuously and is governed by Hamas policy. This system – from its head to the operatives in the field – make an effort to“efface” or obscure the identity of the terrorist operatives who were killed and to present those killed as Palestinian martyrs, civilians who were deliberately killed by Israel.[3]

11.    During Operation Protective Edge, Dr. Ashraf al-Qudra holds a press conference every evening at Shifa Hospital, during which he mentions the number of casualties and publish their names. His lists are uploaded to Twitter and Facebook pages and receive extensive media coverage. They serve as a sole source of information for the Arab, international and even Israeli media concerning the number and identity of those killed during the operation. Moreover, human rights organizations, UN agencies and international organizations also rely on the information disseminated by Dr. Al-Qudra.

12.    The number of fatalities and their identity, distributed by Dr. Al-Qudra and his team and by other Hamas officials or those working in the service of Hamas, create the impression that only innocent Palestinian civilians were killed in Operation Protective Edge. Dr. Ashraf al-Qudra assures journalists that the figures that he disseminates are accurate and objective. However, in practice they create the distinct impression that Israel harms civilians and ignores terrorist operatives, and thus they are used as powerful “weapons” in the propaganda campaign of Hamas and its supporters (the names and organizational affiliation of terrorist operatives are now starting to be revealed in the examination carried out by the ITIC).

13.    It is very difficult, and almost impossible, to refute the names and number of fatalities that reach the media, the UN and human rights organizations, within a short time. This is because an examination on an individual basis requires time and effort and meets with attempts at concealment and deception on the part of Hamas. This is manifested in the reports of the Palestinian news agency Ma’an and AFP, which believe that the lists distributed by the Palestinian Health Ministry cannot be examined independently: “With numbers rising so quickly, sometimes by 100 deaths per day, it would be an impossible task to independently verify every casualty …” (maannews.net; AFP, July 27, 2014).

[**] Further to the ITIC Information Bulletin from July 28, 2014: “Preliminary, partial examination of the names of Palestinians killed in Operation Protective Edge and analysis of the ratio between terrorist operatives and non-involved civilians killed in error”. This is the first part of a study with three appendices, which will be completed within the next few days. The full study in Hebrew is available on the ITIC website.

[1] Dr. Ashraf al-Qudra told the Palestinian and foreign media that he does not see himself as affiliated with Hamas, and insisted that his work is “a humanitarian duty” (maannews.net; AFP, July 27, 2014).

[3] Evidence of attempts to blur the military trappings among the dead terrorist operatives can be found in a report on the French TV channel France 24 (July 27, 2014). The report showed the evacuation of casualties from beneath the rubble of a house. One of those evacuated was a military operative in uniform and armed with a rifle, who looked dead. The announcer said that “his rifle was quickly hidden from our cameras.” A local Palestinian citizen, who received the rifle that had belonged to the dead man, was shown handing it to another person and saying, “Take this and hide it.”

* This article appeared on the Meir Amit website on August 5 under the title “Examination of the Names of Palestinians Killed in Operation Protective Edge – Supplement 1.”