Erdogan a threat to US effort to contain Iran* 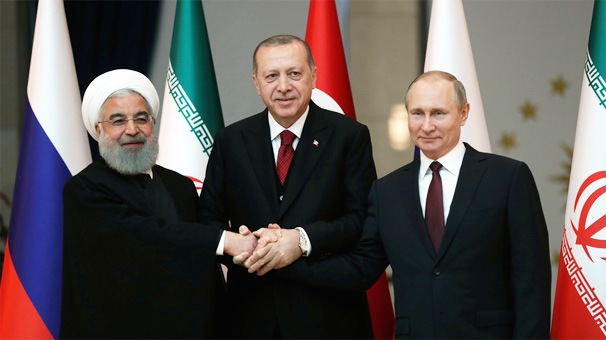 Turkish President Recep Tayyip Erdoğan is ratcheting up the pressure on Saudi Arabia for the now-admitted killing of journalist Jamal Khashoggi – a strategy that threatens the US effort to contain Iran.

Instead of letting the United States and Saudi Arabia settle the matter, Erdoğan keeps raising the stakes in the game, unleashing new accusations and leaking purportedly incriminating footage and information.

The latest is to suggest that the decision to kill Khashoggi was taken at the highest level of Saudi Arabia’s leadership.

“Pinning such a case on a handful of security and intelligence members will not satisfy us or the international community,” Erdoğan said in a speech on Tuesday.

Turkey, according to a Saudi source quoted by Middle East Eye, claims to have intercepted 14 phone calls made during the confrontation with Khashoggi inside the consulate, where Saudi Major General Maher Abdulaziz Mutrib – the head of Crown Prince Mohammed bin Salman’s personal security and protection detail – allegedly contacted the office of the Crown Prince seven times.

‘Bring me the head of the dog’

On top of that there was an alleged call on Skype from Riyadh to the consulate where Saudi royal aide Saud al-Qahtani confronted an under-duress Khashoggi and hurled insults at him. Khashoggi gave back what he got in the form of insults, leading to reports that at this point al-Qahtani ordered Khashoggi’s elimination, allegedly saying “Bring me the head of the dog.”

Al-Qahtani has since been fired as a Royal Court adviser. On Saturday, October 20, the day he was dismissed, al-Qahtani tweeted that he would always be a “loyal servant to my country at all times.”

There are unconfirmed reports that some of the body parts belonging to Khashoggi have been found in the garden of the Consul General.

Earlier, President Trump had called King Salman on Monday, October 15. He reported on Twitter: “Just spoke to the King of Saudi Arabia who denies any knowledge of whatever may have happened ‘to our Saudi Arabian citizen’,” a reference to Khashoggi who had a US Green Card (but was not a US citizen). But the President soon learned the King was not honest in his response to Trump’s questions.

Now Trump has dispatched CIA chief Gina Haspel to Turkey to work on the investigation into the Khashoggi murder. So far at least, whatever information Turkey actually has, particularly in the form of telephone and Skype intercepts, has not been shared with the United States. It could be that Washington already has some of the intercepts through its own surveillance capabilities, but no information on US intelligence gathering on “friendly targets” is available and even if Washington had them it would not say so both for security and policy reasons.

US policy is currently aimed at containing Iran, and Saudi Arabia is a key ally in this effort. Iran has been building up its military capabilities, especially in ballistic missiles and is using its Revolutionary Guards to promote Iranian aims in Iraq and Syria. Iran is also backing the Houthis in Yemen, supplying weapons including ballistic missiles the Houthis have been firing into Saudi Arabia and anti-ship missiles that have hit at least two coalition warships. The Houthis, meanwhile, are holding onto the port of Hodeida in Yemen, a key to controlling the Bab el Mandeb (Gate of Tears) Strait. Approximately 4.8 million barrels a day of crude and petroleum products flow through the strait, with about 2.8 million going north toward Europe, and another 2 million moving in the opposite direction.  The strait is also important in the flow of goods between the Mediterranean and Asia.

The United States has been restructuring its policy toward Iran and has begun to oppose Iran in Syria (with Saudi help in terms of financing and arms purchases) and in Iraq. US policy explicitly has called for removing Iranian forces from Syria. The US also is supporting the Saudi led Coalition (with Egypt, Morocco, Jordan, Sudan, Kuwait and the UAE) to defeat the Houthis in Yemen, supplying arms and support, including real-time tactical intelligence. US ships in the Red Sea, when fired upon by the Houthis, have also responded by destroying Houthi missile sites.

Even more significantly, the Trump administration has withdrawn from the Iran nuclear deal and is putting pressure on other governments and businesses to stop projects in Iran while reimposing sanctions on Iran. “Anyone doing business with Iran will NOT be doing business with the United States,” the President has said. The ploy is working and some European companies have pulled out of transactions in Iran.

Turkey, however, has been in pursuit of a different policy. While not exactly a friend of Iran, Turkey has a loose form of alliance with Iran and Russia, which gives Turkey a voice in operations in Syria that affects Turkey’s borders and Turkey’s ongoing struggle against the Kurds, who live on both sides of the Turkish-Syrian and Turkish Iraqi border. In fact, Turkey has been willing to take risks with its US alliance in buying some of Russia’s latest weapons, especially the S-400 air defense system, an acquisition that has caused distress in Washington.

Nevertheless, Turkey remains a big customer for US weapons, especially the stealthy F-35 fighter. Turkey plans to buy up to 100 of the high-cost aircraft. Washington sees the F-35 as a key way to keep Turkey as a formidable player in the NATO alliance. But NATO members worry that Russia, with its S-400 in Turkey, could have a backdoor into Turkey’s airspace and even into its command and control systems, that form the southern anchor of the NATO alliance and exert key leverage over the Dardanelles and Russia’s access from the Black Sea to the Aegean and Mediterranean.

But the most immediate question is why is Erdoğan stirring up trouble with Saudi Arabia, especially after the Saudis admitted responsibility for Khashoggi’s death? Erdoğan certainly knows that doing so undermines US regional policy and potentially threatens to lead to an upheaval in Saudi Arabia should the matter spiral out of control.

Washington needs to find a way to tone down Erdoğan’s assault on Saudi Arabia and the constant drumbeat he is managing against Saudi Arabia’s leaders. But Washington has diminished leverage with Turkey and Erdoğan. In sending his CIA head to Turkey, Washington is sending an important message, and it is not about the investigation. Whether Erdoğan can be calmed down and stop his agitating remains an open question.

*This commentary has been published by AsiaTimes, on October 24, 2018.