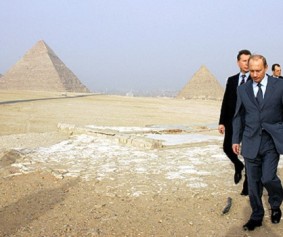 In one of my encounters with the Soviet military attaché in Paris in the late 1980s, I was asked how many staff members were assigned to me at the Israeli Embassy. I answered that I was the only officer and was assisted by two secretaries. I asked my Soviet counterpart how many people he had working with him, and he said “16.” I was shocked at the high number. “What are you doing with so many officers and staff?” I asked. I remember his answer as if it was yesterday: “We are still waiting for better times!”

This episode can easily apply to Egyptian-Russian relations as they emerge today. It seems indeed that “better times” is the proper way to describe the latest developments in Russian-Egyptian relations after almost 30 years of strained, always problematic, and sometimes hostile relations. This is happening not because of a deliberate choice made by the Egyptian regime, but rather as an option of last resort, mainly because of what the current Egyptian leadership and probably half of the Egyptian body-politic feel is a betrayal by their American ally.

The regime is resentful towards Washington for several reasons, most importantly because of its perception that the United States backed the Muslim Brotherhood. Instead of siding with the political forces that stopped the proliferation of political Islam in Egypt, or remaining neutral at a minimum, the U.S. administration, battling to “save democracy in Egypt,” pushed for a compromise between Morsi and his opposition, which could only mean for the opposition that the United States had chosen to be in Morsi’s camp and to back the Muslim Brotherhood unconditionally.

Morsi’s ouster on June 30 in a counter-coup led by the liberal and anti-Muslim Brotherhood forces in Egypt, and backed by the military establishment, was difficult to swallow since the Obama administration had viewed Morsi as the first democratically elected Egyptian president. However, understanding the limits of its power, the U.S. decided to ignore the fact that Morsi had been deposed by what appeared to be a “coup d’état” that would have meant a total halt in American aid to Egypt. The crackdown of the military against the sit-ins staged by the Muslim Brotherhood that had a paralyzing effect on Egypt and brought it to the verge of chaos led the Obama administration to express its disapproval with the events by deciding to inflict minimal sanctions on Egypt by halting the delivery of major weapon systems. U.S. officials said the aid being withheld included 10 Apache gunships at a cost of more than $500 million, and M1A1 tank kits and Harpoon anti-ship missiles. The U.S. had already suspended the delivery of 4 F-16 fighter jets and canceled joint military exercises.

This last action by the American administration was the straw that broke the camel’s back. The already tense relations with Washington that surfaced in the aftermath of President Mubarak’s ousting in February 2011 could not bear what the actual rulers of Egypt felt was an unjustified humiliation imposed on them. The U.S. had, in General Sisi’s words, “turned its back on Egypt,” an American ally for more than 30 years.

The Egyptian answer was nothing but expected: turning toward Moscow. President Morsi had already heralded the shift by re-establishing diplomatic relations with Iran and then by visiting China. However, very quickly Morsi came back to the American fold. It was General Sisi who chose to accelerate the trend after having secured financial backing from Saudi Arabia and the UAE. Sisi understood the rising power of Russia in the Middle East and the declining influence of the United States, the superpower that reigned unchallenged in the region since the 1973 Yom Kippur War.

The shift toward Moscow was logical, but not easy. A full generation separates Cairo from Moscow. The Egyptian officer corps has been educated in the United States, Egyptian army weaponry is basically American, and the alliance with the U.S. had also proven its benefits vis-à-vis Israel. The late President Sadat had chosen to turn his back on the then-USSR and challenge Israel in its exclusive turf – the United States – which he did with much success. It was through American sponsorship and guidance that Egypt got back the Sinai; Egypt enjoyed American economic and military aid since 1975; under American guidance and involvement, Israel had signed a peace agreement with Jordan and attained several agreements with the Palestinians. All this was achieved when Moscow was absent or irrelevant, as it had been during the two Gulf wars and other conflicts in the area.

But now, the tide has changed. The so-called “Arab Spring” has taken a heavy toll on American influence in the area and a series of ill-fated decisions (mainly in the Libyan and Syrian crises as well as a bad choice made by the U.S. administration relating to Egypt) were instrumental in the emergence of Russia as an alternative power in the region. Russia’s unconditional backing of the Assad regime, a local client, emphasized the difference between Moscow’s attitude towards allies compared to American behavior towards Egypt’s Mubarak, Tunisia’s Ben Ali, Yemen’s Ali Salah, and even Libya’s Gaddafi. The U.S. pullout from Iraq was just another “brick in the wall”: The message was loud and clear and to the detriment of the United States.

Having said that, what can one learn from the first-ever visit to Egypt of a Russian foreign minister together with the Russian defense minister on November 13-14, 2013? The answer lies in the composition of the delegation that visited Egypt. It included Mikhail Zavaly, a senior representative of Rosoboronexport, Russia’s state arms exporter, which was meant to signify that one of the main themes of the visit was the supply of Russian weaponry to Egypt in the wake of a further deterioration of relations with the U.S. and a possible embargo on further items crucial to the Egyptian army.

A Rosoboronexport representative said after the visit that Russia was considering selling some major weapon systems to Egypt and in fact was waiting for the Egyptian answer in order to proceed. The representative spoke about supplying helicopter gunships, air defense systems, Kornet anti-tank missiles, and about refurbishing and modernizing previously purchased military equipment delivered by the then-Soviet Union to Egypt. (Other leaked information mentioned selling Mig-29M/M2 fighter jets and even submarines.) Some reports published in the Russian press added that this arms deal would be possibly funded by a third party (Saudi Arabia) or that a loan provided by Russia could be considered in order to finance the multi-billion dollar deal.

It should be stressed that military cooperation between Egypt and Russia never came to a complete halt. The military and technical cooperation between Moscow and Cairo, which was stopped at Egypt’s initiative in the first half of the 1970s after Sadat decided to reorient procurement towards the U.S., was resumed back in the 2000s when Russia upgraded systems it had supplied to Egypt in the 1960s and early 1970s. The total volume of military trade between Russia and Egypt amounted to $1.852 billion from 2005 to 2012 (which equaled 19.4% of the market). With that volume, Russia is rated second among all weapons suppliers to Egypt. First place is held by the U.S., which over the same period supplied Egypt with weapons and military equipment worth $6.865 billion (71.8% of the market). China is third with a military trade volume of $341 million (3.56%), followed by the Netherlands with $165 million, Italy with $139 million, Spain with about $100 million, and some smaller suppliers.

The potential volume of $4 billion currently being discussed could greatly increase Russia’s share in the Egyptian arms market. Finally, the Russian delegation went to Egypt not to discuss the limited contracts that have been typical of the last few years, but to return to the full-scale cooperation reminiscent of the 1960s and ’70s.

According to various press reports from Egypt and Russia, the parties also discussed the possibility of granting the Russian Mediterranean fleet a naval base that could become an alternative to the Tartus port in Syria, where Russia maintains a limited naval facility. Significant in this context was the docking of a Russian warship (the first since 1992) in Alexandria two days before the arrival of the Russian ministers. The ship was greeted with a 21-gun salute and an Egyptian military band.

The parties also discussed cooperation in the economic field and even raised the possibility of establishing a nuclear power plant to be provided by Rosatom that would supply 900-1600 megawatts of electricity.

Russia Grants Legitimacy to the Regime

However, the most important part of the visit in Egyptian eyes was the political legitimacy granted by Moscow to the current regime in Egypt by disavowing and ignoring the Morsi interlude. The Russian Minister of Foreign Affairs, Sergei Lavrov, as well as the Russian media did not miss an opportunity to emphasize that, unlike the United States, they would not interfere in the domestic affairs of other states, that their loyalty to friends was beyond doubt, and that it was up to the Egyptian people to find the best way to solve their internal problems. The most significant pronouncement to this effect was Lavrov’s statement (Voice of Russia, November 11) which said, aiming at the Unites States: “Russia is strictly committed to the principle of non-interference in the affairs of a sovereign state and people’s right to free and independent choice of ways and forms of government…. We do not deliver sermons to our foreign partners. We won’t impose the methods for solving problems of internal competence.”

Lavrov added for Egyptian ears: “I’m convinced that the Egyptian people with its rich historical and civilized heritage is able to make an adequate decision on the role and place of any organizations, including the Muslim Brotherhood…. I’m sure that the Egyptian people is capable of finding effective solutions to problems by taking into account the interests of all political, ethnic and confessional groups.” Lavrov concluded by saying that since the very beginning, Russia “has expressed solidarity with the Egyptian people and supported the drive for renovating the society and the state, promoting democratic reforms and creating more effective social and economic systems.

Lavrov, in fact, expressed full recognition of the June 30 counter-revolution by adding after his meeting with Egyptian Foreign Minister Nabil Fahmi: “Russia wants Egypt to remain a stable state with an effective political system…. We believe that the work that is currently being done there, including the drafting of the new constitution and the holding of a referendum, will help the Egyptians move forward and achieve the long-wished results.” “We have respect for Egypt’s sovereignty as well as for the Egyptians’ right to decide their fate,” he added.

Adding a nostalgic note, Lavrov said that Russia and Egypt are committed to further strengthening their partnership and mutually advantageous cooperation. “Egypt was and remains Russia’s leading partner…. This year we mark the 70th anniversary of the establishment of diplomatic relations…. Thousands of Russians live in Egypt and do business. Hundreds of Russian citizens arrive in Egypt to study at universities while young Egyptians work in Russia,” he said. “This is the base on which we should build more fruitful relations.”

Russia’s charm campaign was well received in Egypt. However, in order to project a balanced approach, the Egyptian foreign minister stressed the fact that Egypt was not abandoning one ally for another. Rather, he said, “Independence is having choices. So the objective of this foreign policy is to provide Egypt with choices, more choices. So I’m not going to substitute. I’m going to add.”

To what extent the United States will accept these new rules remains to be seen. From the Egyptian side, however, it seems that Cairo is preparing for more difficult days to come.