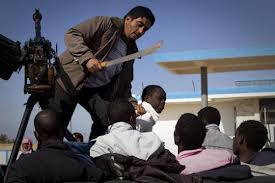 On August 22, 2013, Dr. Abdel Hadi al-Qasi, Egypt’s predominant Sufi leader, speaking on behalf of ‘millions of Sufis in Egypt’, made the following statement:  “President Obama, it seems that the U.S. administration, at this current time, instead of choosing to support love, peace, security, and constructive purpose, has chosen to support violence, destruction, vandalism, chaos, and terrorism.”

In late October an international blog for journalists published an article with an interesting title, viz., “The Four Fingers Holding Up The Muslim Brotherhood.”

The article notes the prevalence of a sign, four fingers outspread, with the thumb touching the palm of the hand and facing outward, which now serves as the symbol of support for Egypt’s Muslim Brotherhood (Ikhwan al-Muslimun) and its deposed President Mohamed Morsy. No one seems quite sure when the salute was first adopted.  Called the “R4bia,” it does relate to the August 2013 sit-in carried out by pro-Mohamed Morsy demonstrators at a protest held at Rabaa Al-Adawiya Square in Nasr City where some 600 protestors (many of them armed) were reported killed by Egypt’s Mukhabarat, the notorious security service.

The four-finger salute has now been adopted throughout Egypt; likewise, it circulates on the Internet on postings made by Ikhwan supporters found from Turkey through the Maghreb. Turkey’s Prime Minister Recip Erdogan, a known Muslim Brother, has used “the four-fingered gesture to greet crowds during public speeches in August.  And Turkey’s official news agency reported that following the August massacre in Cairo, more than 300 Turkish babies were given the name Rabaa in a gesture of solidarity.” Tunisia’s En Nahda party, headed by Muslim Brother Rachid Ghannouchi, has also adopted the four fingers salute.

The R4bia does of course refer to the Rabaa Al-Adawiya mosque located in Nasr City, an eastern quarter of Cairo, where the largest pro-Morsy sit-in was held in August 2013.  The word rabaa means “fourth” in Arabic and, it is yet another irony that the Islamists chose to occupy a mosque and square named for Rabaa Al-Adawiya, an 8th century Sufi Muslim pacifist, mystic and poet. It is also ironic that overthe last decade the pacifist Egyptian Sufi, who exist as a branch of Sunni Islam, have been under attack from both the Muslim Brotherhood and the ultra-radicals.

Many scholars consider Sufism to be an influential and distinct school of thought within Islam; in Egypt alone there are some seventy Sufi brotherhood tarika.  Many are centuries old, and each is led by a Sufi sheikh.  In Egypt there exists a Supreme Council for Sufi Orders and the president is directly in charge of Sufi affairs.

While Sufis are a minority in Egypt they are no insignificant group. It is estimated that as many as fifteen million Egyptians are either practicing Sufis or are in some way influenced by Sufism. Hasan al-Banna, founder of the Muslim Brotherhood was a practicing Sufi, and presently the two leaders of the Al-Azhar (the oldest and most important seat of Sunni learning in the Arab world) are Sufis.

Sufi adapts practice a form of Islamic mysticism that seeks to enable a follower to embrace or experience God during a life on Earth. It is generally agreed that, “The Sufis are moderate, tolerant, peace-loving and highly spiritual Muslims, light years away from the violent image of projected to western audiences.” They believe God must be at the forefront of one’s thoughts at all times.

Sufi leaders are convinced that Egypt’s Salafism is a Saudi Arabia export, and that Egypt’s Salafists follow the same school of thought as Saudi Arabia’s Wahhabis. Opponents argue that the explosion of Saudi petrodollars underpins Salafism, and that it is the enemy of anything moderate and tolerant. In fact, the Salafis do abhor bida’a (innovation), and they believe that the only true path is the reverence for, and the literal replication of, the practices of the post-Muhammad generation. Thus, the Sufi are considered both evil and sinful because there is no strict separation of the sexes at mosques or during their celebrations.  Such antipathy has led Sufi leaders to respond that Salafi practices put “enormous emphasis on external appearance rather than the inner spirit.”

The Egyptian government attack on the Sufi strain of Sunni Islam emerged in 2009 when their gathering (moulid) in celebration of al-Sayyida Zeinab, the prophet Muhammad’s granddaughter, was banned. (The excuse used was to limit the spread of swine flu.)  The government attack on religion continued in early 2010 when Azhari Sheikh and leader of Egypt’s small Shiite community Hassan Shehata and a circle of believers, were arrested by the Mukhabarat and held incognito for a number of days.

Shortly after that event, the attacks on religious individuals and institutions intensified when the Egypt Ministry of Awqaf (Religious Endowments) proscribed a number of traditional Sufi gatherings (for being too riotous).  In effect, freedom of worship was circumscribed, and the Sufi centuries-old devotions (dhikr) that feature song and dance ceremonials in remembrance of the birthdate of important Sufi sheikhs were halted.  Thus, later Sufi gatherings at the al-Husayn and al-Sayidda Zeinab mosques in Cairo resulted in clashes with Egypt’s feared secret police and the Sufi celebrants were forced to evacuate the two sites.

The Ministry decision and the Mukhabarat response was then seen as a victory for Egypt’s radical Salafists whose hatred for Sufis was palpable.  The Salafists – who follow the puritanical practices of the early generations of Muslims (as-Salaf) – had only recently begun to work with a sclerotic Mubarak government that sought to split the radical but manageable Islamists (blatant but inept political revolutionaries) from the more dangerous Muslim Brotherhood (the evolutionists).  Nevertheless, to astute political observers the move signaled a further weakening of the Mubarak government. Indeed, it was a signal victory for Salafists who objected to what they called Sufi “polytheism”, their “encouragement” of sin, the evil mixing of the sexes, their “worship” of sheikhs, and the construction of mosques over holy sites.  In sum, at its core, Sufism is heretical.

Following the “Arab Spring” of 2011 the Sufis came under increased attack by the powerful Muslim Brotherhood movement and by their putative allies the Salafists who had formed their own Al Nour political movement.  They were forced to respond although the history of the many and varied tarikas has been that in times of trouble one should, as always, follow an apolitical path.

In late 2011 a Sufi coalition announced it would launch the Al Sufiya Wa Atasawaf (Sufis and Sufism), Egypt’s first Sufi-themed satellite television station.  Shaykh Ala’ Abu al Azayim, leader of the Al Azmiyah tarika, served as its major sponsor.  According to the Shaykh the station would become the fourth in the Middle East to identify specifically with Sufi Islamic thought. More pointedly the Shaykh envisioned that the station would serve as a moderate counterpoint in the spiritual struggle enveloping Egypt and the Muslim World.  It would also hope to give balance to growing number of reactionary Salafi satellite channels that were emerging in the Middle East and which Azayim claimed, “routinely attack Sufi thought, pollute the practice of Islam with an ultra-conservative ideology and defame the religion’s reputation throughout the world.”  Azayim concluded, “There are a lot of satellite stations. All of them attack Sufism and some of them, or many of them – are [run by] ignorant people… They have no idea about Islam except the niqab for the ladies and the gallabeya and the long beard for the men.”

In Egypt, the Salafists have targeted Egypt’s Christian Coptic community on numerous occasions over the last decade.  And such attacks have often transpired in conjunction with attacks on Sufi sites.  This has been especially true in Alexandria where Sufi shrines are prominent and the tarikas serve approximately 12% of the city’s population.  (Christian Copts total approximately the same percentage.)

Anticipating events that were to come, in 2009 the noted writer Alaa al Aswany wrote, “that there there were two battles being waged in Egypt: one for democracy, the other for Egyptian Islam. “Egypt is defending its civilized and open-minded interpretation of Islam,” he wrote, “against the invasion of reactionary and regressive Wahhabi ideas that are liable to … turn our great country into a Taliban emirate.”  (Jess Hill, the globalmail.org, 7 February 2012)  An observer argued,”Egyptian democracy hangs in the balance. The battle between hardline and moderate Islamists will determine the political future of the most populous Arab nation – perhaps the entire region.”

Unfortunately, the Islamists (Salafists and Muslim Brothers) control Alexandria city politics, and they seem determined to put an end to the tolerant religious practice that over the centuries Copts and Sufis have enjoyed. Literally within weeks of the ouster of President Hosni Mubarak the Salafis began to attack Sufi mosques and shrines.  In Alexandria alone they made no effort to disguise that they planned the destruction of 16 Sufi sites.  In 2011 alone at least twenty Sufi sites were attacked following the 25 January revolution.  In Alexandria, the famed Abu’l Abbas mosque and Qaed Ibrahim mosque were invaded by Salafist extremists who did widespread damage.   Indeed, the battle was already well when Sufi leader Dr. Abdel Hadi al-Qasi, claimed in August 2013 that since the January Revolution scores of Sufi religious sites had come under attack, and some 80 Christian places of worship had already been destroyed.

Tangentially, even Muslim Shia were not exempt from the pillaging of religious sites.  Ironically, despite the attacks on the Sufi and Christian communities, it is quite possible that deposed President Mohamed Morsy will be tried as an instigator to the murder of Shiite Sheikh Hassan al-Shehata and five of his associates.  The Shiite leader was mercilessly slaughtered a week after a conference was called by Morsy (and shortly before his ouster); held at Cairo Stadium, speakers had been allowed to defame the Shia.  Morsy’s enemies have since claimed that Morsy called for the Shia’s assassination and they now insist the former President should be tried for the murder of Shehata as well as for other crimes against Egypt’s religious institutions.