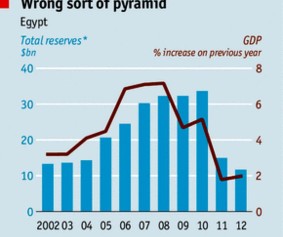 Mohamed Morsi and the Muslim Brotherhood continue to prove that their goal is to subjugate the Egyptian people. Clearly, they’ve misjudged their own power and misread the tealeaves regarding their future. By grabbing the power over Egypt, changing its constitution and pushing more than half of the population into poverty, they’ve lost it and with it many who initially supported them.

Bad losers as they are, they refuse to accept the people’s rejection. Instead of admitting faliure, thus using the opportunity to regain power in the forthcoming elections, they are rejecting the military-led interim government’s timeline that would speed up the election of a civilian government, all the while inciting their supporters to violent confrontationswith the police. Their calls for a ‘holy war’ and martyrdom are echoed by a demonstrator quoted by the BBC, “We will carry out explosions, we will shoulder arms, and nothing other than death will dissuade us from restoring President Morsi to thepalace.”

In the meantime, Egypt’s foreign reserves have dwindled down to $14.9 billion, half of which, in easily spendable cash and securities.

In a show of support for the military and the interim government, Saudi Arabia announced it will deposit $2 billion in Egypt’s central bank, provide $2 billion in energy products, and $1 billion in cash. The United Arab Emirates has also announced “a $1 billion grant to Egypt and a $2 billion loan” because “Egypt’s security and stability are the basis of Arab security.”

The question now seems to be just how much trouble the Muslim Brotherhood can cause.  Given the general state of Egypt, it won’t take much to hamstring the transitional government and push the streets into permanent chaos.

The situation recalls Algeria’s 1992 military coup that headed off an Islamist party electoral victory. The result was an eight-year-long Islamist uprising, which resulted according to different estimates in 44,000 to 200,000 casualties.

If there were any doubts left that the Muslim Brotherhood cares more for Shari’a than it does for Egypt and was on it’s way toward a North-Korean-style society starved into submission, the state of the economy under Morsi’s tenure gives clear evidence.

One hopes that Egypt will not go the way of Algeria, and that a new civilian government could soon take the necessarysteps to stop the viloence and take the neccessary steps to rescue the economy.

An Economic Roadmap for Egypt
By Norman Bailey*

My column of last week, “The West Must Back the New Egypt”, has caused much comment and has been reprinted several times.  This column attempts to put more meat on the bones of an economic plan for Egypt’s future.   A stable and prosperous Egypt has to be among the top two or three foreign policy goals for Israel and the West, perhaps exceeded only by the potential threat posed by a  nuclear-armed Iran.

It would appear that Saudi Arabia, the UAE and Kuwait are going to chip in to cover Egypt’s immediate foreign currency shortfalls which will postpone potential collapse and provide time for the new Egyptian government to prepare a meaningful economic plan for the medium- and  long-term and for the Western countries and the international development  agencies to realize what is at stake and offer generous support to the  implementation of such a plan.  It should include the following items, alluded to briefly in last week’s column (this is not intended to be in any way exhaustive and omits such areas as transportation and communications):

(1)  Egyptian agriculture MUST be  rationalized, reorganized and modernized, which means that the basic units  involved must be large enough to efficiently use inputs of machinery and  equipment, fertilizers and insecticides.  This, in turn, means organizing thousands of small holdings into a limited number of large farms, but without expropriating the smallholders or creating massive migration to the urban centers with accompanying increases in unemployment.  In order to avoid the likelihood of concentration of ownership of such large farms, the peasantry should become members of cooperatives, and sale of memberships should be prohibited in their charters.  Memberships should only be inherited, or if there are no heirs, extinguished.  There are many examples of highly successful and profitable cooperative agricultural enterprises in the world.  One of the most famous is the citrus fruit empire of Sunkist, a billion-dollar cooperative in California and Arizona.  There is no other brand of citrus fruit that comes close to market recognition of the Sunkist label.

The rich alluvial soil of the Nile Valley can sustain nearly all forms of agricultural activity, but a study of the most profitable product groups would likely lead to a concentration on fruits and  vegetables, including tropical fruits which are in high demand in  Europe.  Fish-farming should also be examined for technical feasibility and profitability, and many of the cooperatives could create the appropriate facilities along with traditional agriculture.  Large-scale livestock production, such as cattle, or grains, such as wheat or rice, are not likely to be favored. On a cost-benefit basis, they should probably be imported.  But these are only indications–a careful study might reach different conclusions. Finally, plans to divert the waters of the Blue Nile by upstream counties should be actively discouraged.

(2) A careful and thorough geological and geo-physical survey of energy and mineral resources, including such things as rare earths, should be undertaken as soon as possible.  It is very unlikely that a country the size of Egypt should be as lacking in such resources as present exploitation would indicate.  When found, international investment to exploit the deposits should be welcomed.

(3) A thorough but expeditious review of laws and regulations affecting innovation, entrepreneurship and business formation should be undertaken and all legal and regulatory impediments to domestic and foreign investment should be revised or eliminated.  Egypt should take the lead in reversing the multi-secular decline in Arab scientific and technological progress by investments in technical education, the formation of industrial and hi-tech zones and campuses and incentives to innovate and create.  State enterprises should be privatized, including those enterprises owned or controlled by the armed forces, which can thus make an immediate contribution to economic development.

Again, however, as with agriculture, concentration of ownership should be avoided, especially since industrial development is increasingly capital-rather than labor-intensive.   Anti-trust laws should be promulgated and strictly enforced and as much development as possible should be owned by employee ownership trusts or by community investment banks and similar structures, so that as large a percentage of the Egyptian population as possible would share in ownership of  their own economy, in the countryside and in the urban areas.

In short, an opportunity has suddenly appeared to turn the largest Arab country in the world, in terms of population size, into a showcase of economic development that will surely eventually transform  the political and social structure of the country as well. In this regard, note the post WWII development of South Korea and Taiwan, where political stability under benign military rule and an open economic system led eventually to a functioning and stable democracy.

None of this is Utopian.  All of it is technically feasible and has worked all over the world to create prosperous societies.  Will the people of Egypt and their new leadership take hold of the reins of their own future?  Will the outside world support them generously if they do? What needs to be done is clear enough.

What will be done may, unfortunately, be another story.

*Norman A. Bailey, Ph.D., is Adjunct Professor of Economic Statecraft at The Institute of World Politics, Washington, DC, and a researcher at the Center for National Security Studies, University of Haifa.