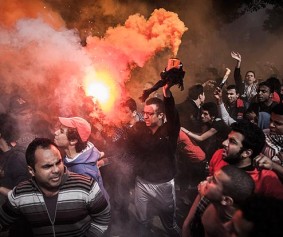 Under Muslim Brother Morsi’s inept economic team more than 4,500 factories have shut down. Egypt’s unemployment rate in the fourth quarter of 2012, have reached 13%, most of which, (77.5%) is among the 15-24 years old. Inflation has climbed much above the official 7.5% (March 2013), and foreign currency reserves declined to US $ 13,424 billion. The country spends about $14.5 billion subsidizing fuel and $4 billion subsidizing food each year.  Nearly half of Egypt’s 90 million people live at or below the poverty line of $2 per day.   The Egyptian Centre for Economic and Social Rights (ECESR), reports of “3,817 labor strikes and economically motivated social protests” following Morsi’s election, and more than 2,400 “between January and March” 2013.

Campuses all over the country are rocked by violent demonstrations, and “it’s getting worse by the day,” a student is quoted saying by Al-Hayat. Bloody clashes between students affiliated with Brotherhood and independent and opposition groups have been reported in Cairo’s Ain Shams University, and ongoing demonstrations in Al-Azhar University have gotten more violent after tainted food made dozen of students ill.

After spending a 12-day visit to Cairo in April, the IMF team left again without an agreement that would provide Egypt with the badly needed $4.8 billion loan. Discussion are supposed to continue this month. However, the latest revelation is that the only economic expert who was able to negotiate with the IMF, formerdeputy finance minister, Hany Kadry Dimian, resigned last December. That the Egyptian kept it secret is not surprising. But why did the IMF?

Morsi’s last fall deal with the European Union to receive $6.5 billion over the next two years, mostly in loans won’t be forthcoming unless the IMF deal is cut.  But Morsi’s seems unable and unwilling to cut fuel and food subsidies as required by the IMF.  Removing the subsidies, would lead Egypt further down the slide into complete political turmoil. But Morsi and his Cabinet are unlikely to cut subsidies before the elections, which have yet to be scheduled, to avoid jeopardizing the Brotherhood at the polls.

Yet, without the IMF loan and the EU and U.S. funds Morsi’s government would be a goner.

Even if the IMF ends up giving away $4.8 billion, the government needs at least a $30 billion in loans from someone somewhere, and fast.

Last March, Morsi asked Iraq for $4 billion, but was turned down.

He didn’t do much better with Russia; During a recent meeting with Putin at a Black Sea resort, Morsi importuned Putin for a sizable loan.  The Russian media reported that Morsi appealed to Putin, “recalling how the former Soviet Union stepped in to finance the building of the Aswan High Dam in the 1950s after the United States abruptly withdrew from the project.”  But Putin refused to discuss a loan, responding they’ll talk about it some other time.

Qatar, however, responded to Morsi’s begging in April, with a promise of $3 billion (on top of the $5 billion it already gave Egypt). Libya has also helped, depositing $2 billion in Egypt’s Central Bank.   Last September, Turkey promised $2 billion in loans, about half of which have been delivered by now, and Saudi Arabia came up with $1.5 billion in loans and grants.

Meanwhile, the incompetence of the government rapidly increasing the plight of Egyptian people. The Brothers have sent supporters to the streets to demand the “cleansing” of Egypt’s judiciary. This caused Justice Minister Ahmed Mekky to resign. Mekky opposed a new bill that would force the resignation of a quarter of Egypt’s 13,000 judges by lowering the retirement age to allow the replacement of  secular judges with Brotherhood sympathizers.   Morsi’s legal adviser, Mohamed Fouad Gadallah, has also resigned. He’s the 12th of Morsi’s original 17 presidential aide appointees to quit.

The Egyptian press continues to be attacked by the Brotherhood, and the government is increasing its suppression of free expression.  On April 19, 2013, the oppositionist English languish Egypt Independent was shut down. Online, the paper wrote that its print edition, the 50th and final, “was banned from going to press…[it] was shuttered by the self-censorship of its sister paper the Arabic-language Al Masry Al Youm, which had blocked its publication in the past over criticism of the government.”

Egypt’s economic crisis has driven the Brotherhood’s erstwhile allies, the Salafi Islamists, into more active opposition. Violent Salafi harassment of Egyptian Copts and secularists has significantly increased. The Brotherhood decided that it could no longer ignore the Salafi challenge when they attacked the home of a senior Iranian diplomat in Cairo, attempting to put a Syrian rebel flag on the gate. They were unsuccessful in storming the building thanks to Morsi’s riot police. In a slightly ironic twist, it turns out that Morsi’s attempt to create Shari’a financing has been blocked by the Salafis.  They oppose sukuk for Egyptbecause it might “become a back-door route to selling off Egyptian state assets to foreigners.” So much for Egypt’s investment climate.

Just in case anyone feels sorry for Egypt’s Brotherhood because of the subsidy regime they inherited from Mubarak, there has been a startling revelation showing what’s really important to the Brotherhood is not the welfare of the Egyptians, but the power to rule country.

To increase their power base, the MB has increased the hiring of government employees (sounds familiar?) The public sector salary bill has risen by 80 percent since the January 2011 “revolution.”  Egypt’s proposed budget for the year ending June 30, 2014, includes $25 billion for public employees, up from $16 billion in Mubarak’s day.

While IMF is ready to negotiate the loan with the government, both the Salafis and the Left are opposing the reforms required for the loan. Aharam online reported leftist leader Hamdeen Sabbahi, saying: “If you look at any country the IMF has gone into, you will find that poverty has increased…Talk about plugging a budget deficit does not get food to the people.”

Nonetheless, it seems that Egypt will get the $4.8 billion from the IMF, despite the fact that there is absolutely no way Egypt could meet reasonable requirements for a loan. Egypt will get the loan because the  IMF is under tremendous pressure by the U.S. and others to bail the Brotherhood out.

Moreover, despite the growing opposition to the Muslim Brotherhood’s government  oppression of civil rights and devastation of country’s economy, the U.S. is determined to assist the Brotherhood.

On April 30, in Cairo, Morsi was given the opportunity to flaunt the latest “advances” “in Egypt’s process of democratic transition,” to a Congressional delegation, headed by Chairperson of Intelligence Committee Senator Dianne Feinstein.

Instead of calling his bluff, the delegation reiterated the “strength and depth of Egyptian-American relations.” The Americans further ensured Muslim Brother Morsi that the U.S. will not let him down, because “Egypt’s stability is key to the stability of the region. They went on to praise “Egypt’s efforts to consolidate the cease-fire and to achieve Palestinian national reconciliation.” Was this the reason for the visit?

Further Reading:
NATION OF CHANGE:  “I hereby declare my total support of all that is Muslim Brotherhood.” http://www.nationofchange.org/muslim-brotherhood-called-egypt-s-master-race-1366383674