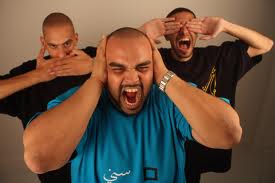 With more daring Egyptians like the rapers of the “Rebel” song, there is a glimmer of hope that Egypt may not be lost to the Islmists

The Egyptian “Rebel” song, a “rap” song preformed by  “The Arabian Knightz,” group, was posted on YouTube on May 26, 2013 (Wara2a B-100 | REBEL). The song is in Arabic and no English translation was available. A friend of the ACD, who is both reliable and fluent in
Arabic  translated and had sent us the the llink..

The video has been viewed 99,000-plus times and although there is purportedly a version entirely in English, we were unable to find it.  There are no English subtitles. The song is attributed to
youthful performers who are undoubtedly Egyptians with some interesting sensibilities. The Muslim Brotherhood isn’t named in the song.  No need: it’s everywhere implied and to use it would be impolitic at the moment.  Moreover, the singers perception of freedom and democracy is the same as ours, not the Islamist oxymoron of “Islamic Democracy”.  And there’s no mention of Obama, Anne Patterson, the U.S., Europe, the International Monetary Fund, or even Israel and the Zionists.

The singers seem to hold the notion that their revolution was for the end of oppression and injustice and the rescue of Egypt and Egyptians per se.

And they say “Religion is for God, but the homeland is for all/
We follow God’s law/ but we won’t let it be bought and sold.”  This suggests that someone in Egypt believes that religion is a private matter, that is to say, not something that a group of mere men can have a corner on and use to oppress.

They rap against the oppression of Islamism  “I see Egyptians being humiliated – gangs riding the nation/Trying to create a new generation of ignorance/So I’m rebelling against oppression and cries of ‘forbidden!'”

In short, the protest against Political Islam and the Islamist who use the state’s political power to silence them:  “I’m rebelling against people who’ve made it their profession/To exploit our faith for their own profit/I’m rebelling to show that I’m a human being and I have a voice and rights.”

Forgive me – but I still believe in the revolution
I don’t much like to talk, but I’ll act if I’m provoked
It’s a simple issue, I don’t need your explanations
I have the power to change things, to revolt for change

I saw their strange ways, I didn’t understand
The same old ways as before, tell me:
Where are the rights that were taken away?
A country in the dumps, always going down
I’m here to revolt against the path of failure

Some people may lose their lives, but our nation will rise
I am Egyptian, and I rebel, saying: Everything for the revolution!

Sorry mister president, but I’ve decided to rebel
I’m going back to Tahrir square
I have the right to say no

We’re the ones who came in the first revolution
To clean the streets of the city squares
But after those free elections, they stole our religion and our faith
My brother died there, he thought he would get me my rights
Now I look in the mirror and hate what I see
I’m silent, as if I’ve put my hands in my pockets
While my country is drowning, crying for help
My brother died a martyr
I’m not with the Brotherhood, nor of the Salafis or the liberals
I’m just an Egyptian who’s rebelling
Against oppression and injustice, wherever they are
Because I’ve decided to live as a human being, and if I have to die
Then I will die as a human being

Some people may lose their lives, but our nation will rise
I am Egyptian, and I rebel, saying: Everything for the revolution!
…

I’m Egyptian and I’m shouting out loud
Who’s listening? I’m a human being
When I speak on behalf of the people, fear won’t hold me back

I have a dream and no matter who tries to take my rights
I keep on dreaming of my country,
And of the revolution which will bring it back to me

I’m not afraid because I’m a free man
My country hangs in the balance, but I can see our destination clearly

I see Egyptians being humiliated – gangs riding the nation

Trying to create a new generation of ignorance
So I’m rebelling against oppression and cries of “forbidden!”

I’m rebelling against people who’ve made it their profession
To exploit our faith for their own profit
I’m rebelling to show that I’m a human being and I have a voice and rights
I’m rebelling on behalf of al-Azhar, and I’m not afraid to say “no”

Some people may lose their lives, but our nation will rise
I am Egyptian, and I rebel, saying: Everything for the revolution!

~~~~~~~~~
To the Perplexed American, More on Egypt’s Latest Revolution from the Daily Brett Blog, July 7, 2013
From an Egyptian in Alexandria

A lot of my dear American friends sill ask me what on earth really happened in egypt, for their benefit, and anyone else on earth genuinely trying to make heads or tails of us “crazy Egyptians” ; here’s exactly what happened in egypt over the past 12 months, but expressed in ‘American” terms…

There are no exaggerations or lies, these events all took place:

On June 30th 2012, democratically elected Barack Obama wins the election with 51.7%, takes the oath, and is sworn in as president of the United States.

First five months of his term go relatively smoothly, where he makes almost no decisions (except for some dubious presidential pardons to a dozen convicted terrorists, including some convicted for their part in the assassination of a former US President).

Suddenly, on November 21st 2012, president Obama issues a presidential decree giving himself sweeping powers, to the extent that his future decrees become un-contestable in any court, in effect his decisions henceforth are akin to the word of God.

His laws a new Bible…
Nationwide protests erupt as a result of this decree and 1.5 million people organize a sit-in at the White House to peacefully request he rescind it.

One short week later, he fires the United States District Attorney and personally appoints a Democrat to replace him.

A month later he annuls the US Constitution and forms a ‘constitutional committee’ to draft a new constitution (committee includes no Republicans or Independents, no Moslems or Jews, and only a handful of women.. And is composed primarily of Democrats & religious preachers)

In a referendum not supervised by any judicial branch, this constitution narrowly wins, and President Obama ratifies it the very next morning (despite it having only gotten the approval of 18% of all Americans).

Within a month he invites top global terrorists, known jihadists and Al Qaeda members from all over the world, to a rally in Yankee stadium, where he cuts ties with and declares war on, Canada.

Throughout this whole time, the US economy is sinking, the stock market collapsing, foreign investment has all but stopped, tourism has died, and electricity, fuel, and water shortages are a daily occurrence.

Unemployment has almost doubled, and the US$ dollar has lost 20% of its value globally.

Democratically elected president Barack Obama has done all the above in his FIRST YEAR IN OFFICE!!!

110 million Americans take to the streets in 50 States peacefully and politely demanding -for 4 straight days- that democratically elected Obama leave immediately, and not continue his remaining 3 years….

That’s it in a nutshell

Who would you say had “legitimacy” in this case if it had been America?

“Democratically elected Barrack Obama”, or the 110 million Americans who fired him … ?”