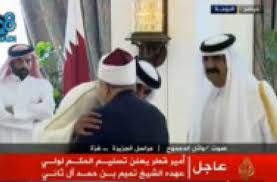 Egypt’s Al-Ahram reported on 13 December that Al-Azhar’s Supreme Clerical Committee, the paramount advisory body of one of Islam’s most influential religious and academic institutions, had just voted to accept the resignation of the noted Muslim intellectual Shaykh Yusuf al-Qaradawi.

An octogenarian, Qaradawi is an active lecturer on theology at the University of Qatar, and periodically addresses the Muslim World through Al Jazeera radio and television.  His name is known throughout the Dar al-Islam; and his program, “Shariah and Life,” has been heard by tens of millions of Muslims.  While his lectures directed to Western audiences may be snooze-inducing, his pronouncements issued through Islamonline, his internet outlet, and his recent fatwas (religious pronouncements issued by a respected Muslim) are often news-making. Indeed, recent fatwas have been quite controversial — especially those made in the wake of 9/11/2001.

Qaradawi, Egyptian-born and a Qatar resident, has for decades been considered the chief ideologue of the international Muslim Brotherhood (Ikhwan al-Muslimun). In a long interview with Asharq Al-Awsat, (27 December 2010) Qaradawi claimed that he had rejected the call to become the Ikhwan Guide “on numerous occasions, preferring to remain a guide for the nation.” Thus, it was not surprising that only days before submitting his resignation Qaradawi had protested what he considered an anti-Muslim Brotherhood bias prevalent within Al-Azhar. Qaradawi was especially disturbed that the institution had not protested the ouster and subsequent arrest of Muhammad Morsi the Egyptian President and Muslim Brotherhood leader.  And neither had Al-Azhar, nor its Grand Imam, protested the subsequent treatment of the Ikhwan, nor had it ceased to circumscribe the activities of Ikhwan student members found in Al-Azhar itself.

In mid-July 2013 Al-Azhar had publicly rejected Qaradawi’s fatwa issued on his website only days before.  In it he labeled Morsi’s ouster on 30 June a “military coup” and urged all Egyptians to support the Muslim Brotherhood leader and return him to power.  He denigrated General Abdul Fatah Al-Sisi; and then, in what was an unforgivable slap in the face, he included the name of Al-Azhar’s Imam Ahmad al-Tayyeb among those who al-Sisi had consulted but who did not “represent the Egyptian people.”  Al-Azhar responded by condemning the “arbitrariness and shallowness” of Qaradawi’s fatwa, and argued that the overthrow of Morsi was little different than the popular uprising that had introduced the Arab Spring in 2011 and ended the reign of Hosni Mubarak.

Al-Azhar reproached Qaradawi for the terms, expressions, and allusions he employed in his fatwa. According to the Islamic institution, they were a “deliberate call for sedition to which Al-Azhar cannot reply.”  The statement claimed that Al-Tayyeb would have betrayed his national role had he had refused to participate in the latest national dialogue, called for by political and religious leaders. Thus, Al-Azhar concluded that Qaradawi’s fatwa “soils religion in political fights for power,” and it noted the efforts that Al-Azhar made to prevent the situation from deteriorating and reaching “this dire situation.” (Al-Ahram reporting.)

In the months that followed the Arab Spring Qaradawi was a welcome guest in Egypt, but following Morsi’s ouster he was placed on a wanted list by Egypt’s top prosecutor Hesham Barakat. Specifically, he was charged with inciting riots that led to the death of protestors, public safety and military personnel. Although not specifically stated, he was by inference charged with inciting jihad against the Egyptian leadership.

At Doha, Qatar, Qaradawi was quick to respond and hit back in a Friday sermon delivered at the Omar Ibn al-Khattab mosque. From the safety of what has been his home for nearly a half-century, Qaradawi urged Egyptians to boycott the election process proposed by the acting government. He stressed that, “Morsy is the ruler. He has to come back and agree with his brothers and all the people and nation on what is to be done.”  Despite all evidence to the contrary, he claimed that the present rulers were in the minority and the government was daily losing the support of more people.  As he saw it, it was no longer simply the Muslim Brotherhood’s revolution because, “All Egypt now is revolting.” And in an oblique attack on Al-Azhar, Qaradawi accused the “current regime of causing the killing and injury of thousands of people, and the academic year to be halted, leading to damage and ruin.” (Al-Masry Al Youm, Egypt, 13 December)

The Qatar Protectorate
Qaradawi’s pronouncements are a reminder that thanks to the ruling Al-Thani family the Muslim intellectual has used Qatar to enhance his reputation while living securely.  It is truly ironic that an Egyptian Muslim Brother who despises the West (“Islam will come back to Europe for the third time, after it was expelled from it twice…. Conquest through Da’wa [proselytizing], that is what we hope for. We will conquer Europe, we will conquer America! Not through sword but through Da’wa.”) is a subject of the pro-American ruling family. (Qaradawi, “Apologists or Extremists”, 9 July 2008.) Yet, simply put, the Al-Thani are survivors.  When Qatar, a former British protectorate, became independent in 1971 it was not worth worrying about. However, with the discovery of major gas fields it soon emerged from obscurity.  In 1981 it joined the Gulf Cooperation Council to strengthen regional political relations. In the next decade it suffered a myriad of threats that emerged during the years of the Iran-Iraq War.

It was the Iraq invasion of Kuwait and the subsequent Operation Desert Storm that finally solidified Al-Thani thinking that Qatar needed a powerful friend to ensure its survival. During the 1991 war, the United States-led coalition forces were welcomed in Qatar. Palestinians who opposed that opening to the West were expelled, and the population has remained dependable ever since.  Following the war both Iraq and Iran remained threats to Qatar’s petroleum interests, and Qatar signed a defense pact with the United States.

In what must be considered one of history’s great balancing acts, it is thanks to the U.S interest in the Persian Gulf that Qatar has managed to survive the threats of three mortal enemies: Neither Saudi Arabia, Iran, nor Egypt would shed a tear if Qatar were effaced from the world’s body politic.

Although it is doubted that one in fifty Americans could find Qatar on a map, Qatar is an American  protectorate.  Perhaps not in the traditional sense, as it has its own government and follows its own foreign policy, but in its military relationships it should be visualized as a rather pale, but still luminescent replica of, for example, the US Pacific Ocean protectorates.

It is a protectorate despite the fact that Qatar funds rebel militias in Syria, especially with an Islamist bent, whose aims differ greatly from the Free Syrian Army that Washington supports.  It is a protectorate even though the Al-Thani have provided aid and comfort to the international Muslim Brotherhood organizations in the diaspora since the mid-nineteen-sixties.

The close Qatar-U.S. relationship was underscored when the former Arab League Secretary-General Amr Moussa stated in November 2012 that Qatar’s powerful Prince Hamad Bin Khalifa had offered to “pay in full” to ensure the U.S. military presence in Qatar, and that it would establish bases in other Persian Gulf states. Regarding Prince Hamad, Moussa claimed, “When he thought of protection and saw that Americans are the only ones willing to provide it, here he thought of the American military, which forming a base in Qatar was not among its priorities. But Sheikh Hamad told Americans that he will ensure their expenses are paid in full, so now he enjoys security and has moved forward.” (Al-Arabiya, November 30, 2012)

On 12 December 2013, the day before Qaradawi’s Friday sermon at a mosque in Doha, the New York Times reported that Secretary of Defense Chuch Hagel had been visiting the clandestine U.S. Combined Air and Space Operations Center at Al-Udeid air base, Qatar. That base serves as the crucial ultra-sophisticated center of operations from the Persian Gulf, to Afghanistan in the east, and the Levant to the northwest. Until Hegel’s visit, the post had been a “highly classified” American facility.  It was reported that until the Hegel visit, “its location was carefully guarded by the Pentagon and the Qatari government, out of concerns from both about sensitivities to its presence.”

The reporter added, “There was no official comment on the disclosure from the Qatari government. But a senior Pentagon official described Mr. Hagel’s conversation with his Qatari counterpart, Maj. Gen. Hamad bin Ali al-Attiyah, on the standard diplomatic rules of anonymity.  The general noted that Bahrain openly embraces the American Fifth Fleet, and so that tiny nation is known as the focus of efforts to defend waters of the Persian Gulf. According to the Pentagon official, General Attiyah then said that Qatar was proud of its role hosting the command center defending the region’s airspace. (Thom Shanker, “Hagel Lifts Veil on Major Military Center in Qatar,” New York Times, December 12, 2013).

In Qatar, Mr. Hagel and his counterpart signed a new Defense Cooperation Agreement that includes joint training and exercises and other unspecified “cooperative military actions.”

In accord with the maxim that “politics makes strange bedfellows,” one can expect that the Qatar-U.S. relationship will continue to mature, while, simultaneously, Qatari resident Yusuf al-Qaradawi preaches on the destruction of Egypt’s “secular” government and the Muslim conquest of America.

*J. Millard Burr is a Senior Fellow at the American Center for Democracy.